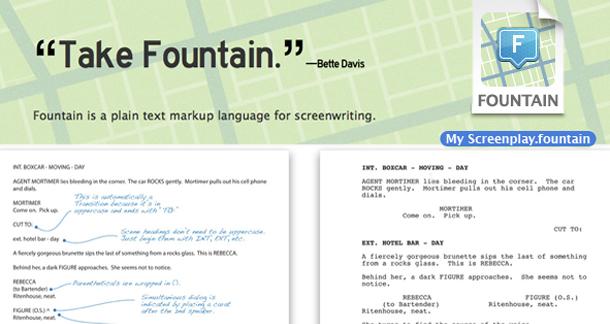 Over a year ago, I wrote a roundup of mobile screenwriting apps that, among other things, touched upon the Fountain formatting rules as a viable alternative to dedicated screenplay software. Fast forward to last July, when my review of Weekend Read, an eReader for screenplays, made brief mention of Fountain file support within the app. Mentioning this feature, I was reminded that I never really got around to learning some of the ins and outs of this writing style—for lack of a better term—and that perhaps it was time I educated myself, and share what I learned with LitReactor readers.

Inspired by John Gruber's Markdown, Fountain was developed by John August, a big-name Hollywood screenwriter and the brains behind the aforementioned Weekend Read, alongside Nima Yousefi, software developer for Quote Unquote Apps, and Stu Maschwitz, a fellow filmmaker and photographer. According to the main Fountain webpage, fountain.io:

Stu and John discovered that they were simultaneously working on similar text-based screenplay formats, and merged them into what you see here.

We're calling this column a product review, but that's a bit of a misnomer, as Fountain itself is not a purchasable/downloadable piece of software. Moreover, to utilize Fountain, you don't need to spend a dime. Let's again turn to the main Fountain website for a broader definition:

Fountain is a simple markup syntax for writing, editing and sharing screenplays in plain, human-readable text. Fountain allows you to work on your screenplay anywhere, on any computer or tablet, using any software that edits text files...

So let's further define "simple markup syntax." In a nutshell, this refers to any written text that is simultaneously readable by humans (as opposed to CPUs, i.e.: robots), but also easily translated into stylized and formatted documents.

If you're still lost, that's okay: in truth, I don't understand a lot of this either, and you don't need to know anything super technical to use Fountain. The main point of discussion here is:

How Does It Work?

Simply put, it just works. To utilize the Fountain syntax, you really only need to know one thing: how to type. Follow along with me.

Open the free text editor that comes preinstalled on every computer (if you're an Apple, it's called Text Editor; if you're a PC, it's called NotePad). Most Plain Text editors default to a single-spaced writing landscape, so you don't have to worry about any pre-formatting (not even where fonts are concerned). Write something that looks exactly like this:

CB sits in a booth, alone. She wears a pink wig, heavy blue eye shadow, and a fur coat. Cup of coffee on the table in front of her, steaming.

Jingle of bells, the whine of a door opening and closing. CB does not look up.

PICK sits down across from CB, brushing snow off his peacoat.

PICK
Are you Cara Beth?

As you can see, minus the centered character names/dialogue and the properly placed (beat), this pretty much looks like a screenplay. There are double spaces between blocks of action and character names, single spaces between character names and dialogue. But how do you get it to look exactly like a screenplay? Save the file as Name.fountain (substituting name with whatever suits your fancy, like the title of the project), then import said file into any dedicated screenwriting software that supports Fountain, like Final Draft, Movie Magic Screenwriter, and Fade In for instance, as well as a host of other applications, including Screenplain, a free web application that converts Fountain files to FDX and HTML (see a complete list of Fountain-friendly apps here).

And that's it. Seriously, that's it. The Plain Text document that looks slightly like a screenplay will automatically translate into this: 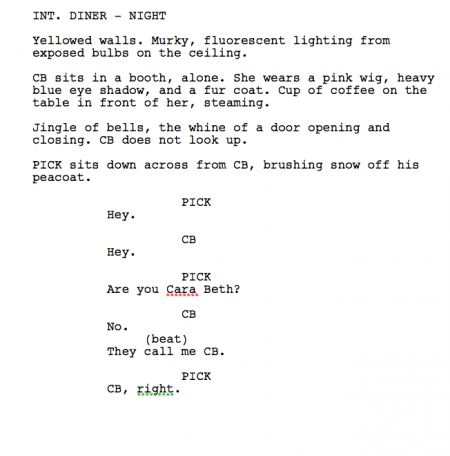 From there, you can print the document or save it in other formats. Just be sure to hang onto that original .fountain file as well (more on this later).

Sounds Too Good To Be True

In a way, it is. There are indeed intricacies and potential technical snafus to this writing style, but fear not. That's why I'm here.

First things first, you may want to double check that the .txt (or Plain Text) extension is completely absent from your Fountain file. See, .fountain isn't a proper extension, per se; it's more like a code, telling other programs to translate this file into proper screenwriting format. I'm not even sure that's completely accurate, since some programs, like the aforementioned Fade In, don't need the .fountain marker at all.

But some do. Like my beloved Scrivener, for example. Every time I dragged a Fountain document into my binder, the resultant translation ranged from exactly the same as the Plain Text environment to just shy of the proper screenwriting format. After several back-and-forth emails with a very helpful Scrivener representative, it was determined I had to go into the "Get Info" section of the file and delete the .txt extension completely. After that, the formatting occurred automatically, as it should.

Other programs offer zero Fountain support, like Celtx. Hopefully we'll see that change in the future, but for now, if Celtx is your screenwriting software of choice, Fountain will not be for you.

Another thing to consider: before now, we've only discussed the basic rules of screenwriting—action and character/dialogue. But what about more extensive formatting options like bold and italics, dual dialogue, title cards, manual line breaks within dialogue, etc.? All of this and more are writable within the Fountain syntax, but they take a little extra typing to accomplish. If you have experience writing code, this may come easy for you; for everyone else, this may feel like learning a new language—and technically, you will be. If you don't use the fancier screenwriting tricks, then you don't have to worry, but if you do, well...

You might be asking, "If I use dedicated screenwriting software, why would I bother learning and writing in this other format?"

Well, let's say you're using Scrivener to pen your screenplay. There currently isn't a mobile option for that particular software, so you have to find alternate means of working when you're outside of your house. You own an iMac and an iPad, and you use iA Writer on the latter for your on-the-go writing needs. Utilizing the Fountain rules, you could hammer out scenes on your lunch break, and not have to worry about retyping or reformatting them later. You can even sync Scrivener with iA Writer, so that anything you write while away from home will automatically appear in your binder at home, saving even more time. iA Writer is also available on your iPhone, so you could continue working on the train or the bus, during boring meetings, trapped in an elevator, etc.

The mobile options don't stop at iA Writer either. Any Plain Text app will do the trick, including the built-in (and thus, free) Notes app, or the Windows/Android equivalent. If the resultant file is .txt, you can use Fountain.

Beyond actively using the syntax, Fountain is a great option for backing up your screenplays. Again, from fountain.io:

Because it’s just text, Fountain is also a great format for archiving screenplays without worry of file-format obsolescence or incompatibility.

This kind of thing happens all the time. Final Draft switched from FDR files to the XML-based FDX, which are unreadable on older versions of the software. As of now, you can still open FDR files in the most current release of Final Draft, but for how long? What happens to those screenplays when there's no longer a program that can open them?

Even PDFs run the risk of becoming inaccessible or wonky after a certain time. But Plain Text in various forms has been a staple of computing since, well, the advent of the computer. It's one of the basic building blocks of certain operating systems like UNIX, and it's used for coding and other functions all the time, which means Plain Text won't be going away any time soon. Why wouldn't you back up any written work—be it a screenplay or prose fiction—into this tried-and-true format?

Anyone have experience with Fountain? Any pluses or minuses you'd like to add? If you didn't already know about it, will you use the syntax now? Tell us what you think in the comments section.