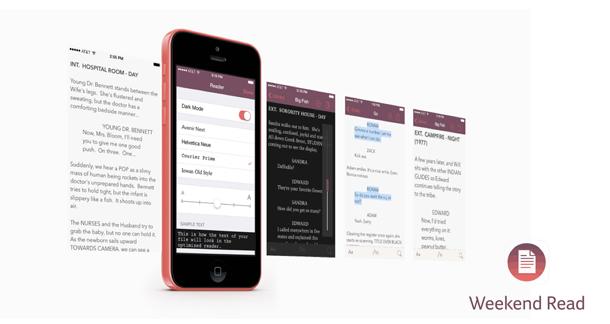 For convenient, on-the-go novel-reading, there are numerous applications for your phone to choose from; Kindle, iBooks and Nook are perhaps the top three, and there are many original but little-known entries to the market, not to mention the plethora of third-rate knock-offs.

But what about screenplays? Are there apps out there that give you the same command over text size and font, without sacrificing the standard dialogue and action formatting of the medium?

Up until the launch of Weekend Read back in February—an eReader conceived by lauded screenwriter John August and realized by developers at Quote Unquote Apps—the answer was no. I mean, there was Final Draft Reader, but of course this application was designed strictly for Final Draft's proprietary FDX file format, and is thus aimed strictly at users of FD (i.e., screenwriters). There's no support for PDF or other non-proprietary file types, and there's no way to optimize the text for a better reading experience.

Let's dig a little deeper and discuss the hows and whys of this app's greatness, shall we?

As previously mentioned, Weekend Read sprung from the mind of John August (Big Fish, Go), one of the few recognizable names working in Hollywood. His blog and podcast Scriptnotes (co-hosted with fellow writer Craig Mazin) are favorites with amateurs and professionals alike.

August's decision to develop the app was simple (quoted from his blog at johnaugust.com):

Up until now, reading screenplays on an iPhone has been terrible. It’s all squinting and pinching. Weekend Read takes screenplay PDFs, Final Draft and Fountain files and reformats them to look terrific on your iPhone...

My goal with Weekend Read was to make the experience of reading scripts on the iPhone better.

The demand for an optimized iPhone reading experience is implicit. We're more reliant on our mobile devices than ever before, using them not just for play, but for work. Despite the app's name, I see Weekend Read coming in handy Monday through Friday as well—on long commutes home, during lunch hours and breaks, and any instance where hauling out an iPad or even a printed screenplay is inconvenient or obtrusive. Though great for casual reading, Weekend Read will help both professional and aspiring screenwriters, producers, directors and actors get their jobs done more efficiently.

Make no mistake, Weekend Read is as simple and straightforward as it gets. If you've read this far, you already have a solid understanding of how and why to use this app. But just like a well-written narrative, things aren't that simple. Here's a rundown of WR's most impressive features:

Now that we've covered the basics, let's get a bit more specific, shall we?

I encountered a few minor roadblocks when using Weekend Read. Here they are, in no particular order.

As of right now, Weekend Read is an iPhone-only application (no versions for other platforms like Android exist). However, as you may or may not know, any iPhone app can be downloaded onto an iPad, so I thought I'd check out WR on my 3rd Generation tablet. At 1x magnification, the text looked pretty fuzzy to me (click to enlarge the photo): 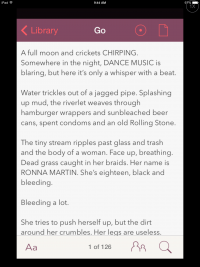 And, of course, at standard magnification, the window was the same size as on my iPhone, and thus there's no point reading it on a larger device. Perhaps the above image doesn't look off to you, and you'd rather use WR on your iPad, but I wouldn't personally recommend it. (The app may very well look fine on an iPad Mini, but I don't own one, so I couldn't speak to this).

I'd like to see an iPad app in the future, but for now, the iPhone version is more than adequate.

Though PDF is a supported file type, I had mixed luck porting these types of documents into Weekend Read. I tried opening Repo Man, a screenplay no longer available at writer Alex Cox's website, but one which I downloaded eons ago. At first, I got this message: 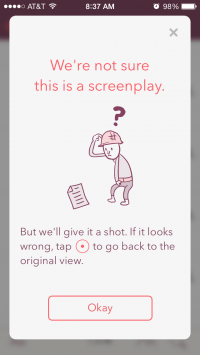 I tapped "Okay," and immediately saw a string of lines and numbers with no text, like so: 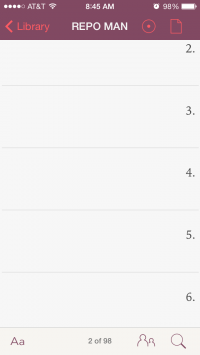 There are some production notes at the end of the screenplay, and some of those ported over just fine, while others became gobbledegook, as you can see in the image below (note that, in the right-hand image, ASSHol_E!! shines out from the broken text). 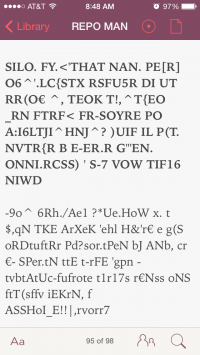 You're still able to read the document if it doesn't port over properly, however: there's a toggle switch for reading any ported document in its original form. Obviously, this view is not optimized, so you'll need to perform the dreaded squint/zoom ritual in order to read the script this way, but if you're in a pinch it will do. 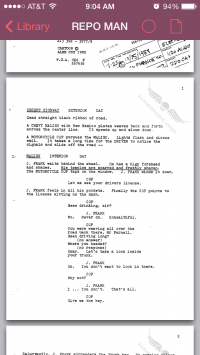 As to why this particular screenplay had so many translation woes, I theorized that the issue relates to Repo Man being a PDF comprised of scanned pages of the physical screenplay. So I tried a document from one of those free screenplay websites (you know the ones I mean—Drew's Script-O-Rama and what not). I no longer endorse using such websites for a number of reasons, but I had downloaded the file years ago and the file was just sitting on my hard drive (I'm a bit of a digital hoarder), so I figured, why not?

This PDF appeared to be someone's transcription of the screenplay, and not scanned images, but when I attempted to open it in Weekend Read, I got the same results as Repo Man: lines and numbers, but this time there was no broken text.

Was it an issue of age, then? Not so, as a PDF of my own screenplay from college (damn near ten years ago) looked just fine, minus a few wonky formatting issues. So perhaps it's merely an issue exclusive to PDFs downloaded from websites (legitimately or illegitimately).

Perhaps, but then again, it's probably just an issue with PDFs in general. According to the "Getting Started" document in Weekend Read: "...PDFs can vary a lot, and some simply refuse to be optimized." What this says to me is, if you have the option of another supported file other than PDF, go with that one.

As of right now, Weekend Read does not allow you to highlight text and make notes, a standard feature of most eReaders. It would appear, though, that the developers are working on adding this feature soon, so just hang tight.

As previously mentioned, Weekend Read is an iPhone only app (for now), with the ability to install on an iPad if you don't mind a little fuzzy text. The app is free to download, but you're limited to four documents and you can only highlight one character's dialogue at a time. An in-app purchase of $9.99 will unlock these restrictions. This may seem like a steep price tag, but Quote Unquote is constantly updating and improving Weekend Read with both the casual reader and the working professional in mind, so if you're the later, I think it's money well spent. Download it the from the App Store here.

What do you guys think? Is this the screenplay eReader you've been waiting for? What other features would you like to see? Tell us your thoughts in the comments section. And as always, if there's an app or product you'd like to see reviewed here at LitReactor, send your suggestions via email to tech@litreactor.com with a link.