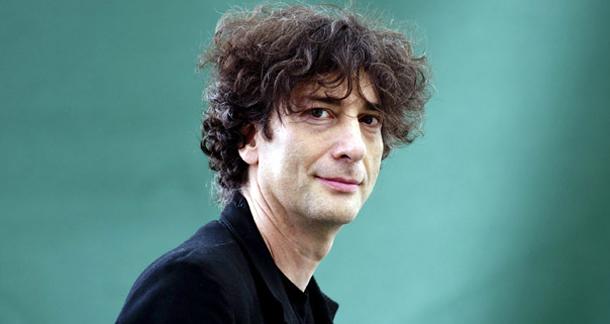 Teresa Miller, the evening's MC and executive director of the Oklahoma Center for Poets and Writers (housed within Oklahoma State University-Tulsa) called author Neil Gaiman a "rock-star," a label that has been applied to him before. The Oxford Dictionary defines "rock star" as "A person treated as a celebrity, especially in inspiring fanatical admiration." But there are more negative connotations associated with the term, invoking images of the stoned and/or drunken narcissist glamming and sneering onstage in equal measure—the charming asshole, whose antics are forgiven because they're just so good at what they do.

Gaiman's March 10th appearance at the Tulsa Performing Arts Center was nothing at all like a rock show. The entire evening felt intimate, summed up nicely by my friend Meredith, who said, "It's like we were kids hanging out with him, and he was telling us stories." This despite the fact Gaiman had very little direct interaction with the audience—the Q&A portion was handled via little notecards that were filled out by audience members ahead of time (sadly, I did not know this would be happening, and was not able to fill out a card myself). This divide notwithstanding, Meredith's statement remained true. It did feel relaxed, much different from seeing a band live, in which it is clear they are putting on a show for you, even if the artists interact or even crowd surf (as Gaiman's wife Amanda Palmer is known to do). The Tulsa-PAC Chapman Music Hall, which seats over 2,000 people, may have been packed to the brim, but it felt no different than seeing the man at a local bookstore, reading his work to a small crowd.

The Tulsa-PAC Chapman Music Hall...may have been packed to the brim, but it felt no different than seeing the man at a local bookstore, reading his work to a small crowd.

When he came onstage, Gaiman seemed overwhelmed by the number of people in the audience, particularly when he gazed at the filled-up balcony . "It just dawned on me you guys are up there," he said. "The things that happen when you look up." When he first began to speak, he was soft-spoken, perhaps even nervous, but he eventually warmed up and became more lively—behavior quite unlike the theatrics of your typical rock-star.

The proceedings began with Gaiman receiving the 2015 Oklahoma Center for Poets and Writers Ambassador Award, which according to the evening's program, "honors writers from around the world whose works reach beyond boundaries to address universal themes." He was also given a lifetime membership to the Tulsa City-County Library for his lifelong love and staunch support of libraries in general.

By visiting this prominent Oklahoma city, Gaiman was fulfilling a lifelong dream. He spoke at length about R.A. Lafferty, a Tulsa native who he admires greatly and counts as one of his earliest influences. Gaiman officially announced the author's induction into the Oklahoma Writers Hall of Fame and told of his early correspondence with Lafferty, in which he received wonderful advice and encouragement toward his own writing career. Gaiman said, "I discovered that Tulsa was a mysterious, magical and very peculiar place in the work of R.A. Lafferty." He was also quoted in the program as saying, "Tulsa has been, ever since I was 19, the place in America that reeked of literary magic."

Gaiman read Lafferty's "Seven Day Terror," a story from the author's long out of print collection Nine Hundred Grandmothers—a treat, since Lafferty's work is, obviously, hard to come by. Gaiman's reading was masterful, perfectly capturing the comedic madness of the tale. Making the moment even more special, Gaiman used Lafferty's personal copy of the book, lent to him by the Department of Special Collections and University Archives, housed within the McFarlin Library at the University of Tulsa.

In addition to Lafferty's piece, Gaiman also treated the audience with two of his own short works, both previously published in his Calendar of Tales project, now available in his new collection Trigger Warning (read Leah Rhyne's Bookshots review here).

Aside from ongoing complications with his microphone, which did not seem to "like the shape of his ear," Gaiman was perhaps at his most charming answering audience questions. Here are a few highlights.

When asked, "What scares you?":

On the nature of funding the arts in this country, Gaiman said, "Quality of life is big and huge and important," then referenced a quote from Winston Churchill. When asked whether or not England should close its art galleries during World War II, Churchill vetoed the idea, stating, "What the hell do you think we're fighting for?" The author then summed up his own feelings thusly:

Arts make everything worthwhile. They're the icing on the cake of life...That's a terrible metaphor.

When asked where he gets the confidence to write:

There's nothing else I'm good at.

Gaiman went on to say that when he started out, he had all the confidence in the world, even though he "wasn't a very good writer." Now that he's older, he has very little confidence and constantly doubts himself as an author, but it's "too late" for him to do anything else. Again, no bravado here, just a humble man opening himself up to a crowd of 2,000 plus strangers.

On his past time of beekeeping:

Everyone should have a hobby that can kill them.

And concerning the issue of colony collapse:

Bees are disappearing, and I'm doing my part to help.

One audience member asked, "Why does my daughter love you?" He replied:

I'd like to think she has good taste. But she's probably just amused by an Englishman with funny hair.

He was asked, "How do we deal with Terry Pratchett's illness?" (Gaiman's co-other on Good Omens and an astounding author in his own right was in the final stages of Alzheimer's disease at the time of the event; Pratchett passed away two days later, on March 12th). The question became a serious and sad moment, both for the author and the audience. Gaiman simply answered, "You don't. You get sad and gloomy, and then you go back to whatever it was you were doing." He went on to say that he doesn't know how we deal with it as individual people, but as a "body of people" we could put as much money into Alzheimer's research and preventative care as we put into cancer research, stating that while cancer survival rates have gone up, the number of adults afflicted with Alzheimer's has remained more or less the same over the years. This response received uproarious applause.

The Q&A ended with the question, "Does the kind of fantastic fiction you write undermine a naturalistic view of the world?" He replied:

It doesn't undermine a naturalistic world view, it reinforces it. Fiction is a wonderful, tough thing, and people who don't realize the big, important things we can learn from stories are missing the point of fiction. With stories, we understand something can be absolutely true even though it has never happened. We can bring back from fiction things that make our lives so much better.

After reading his second Calendar Tale, Gaiman thanked all of us, stating that he hoped to come back to Tulsa soon. We gave him a standing ovation, and he walked off the stage slowly, waving to the crowd and lingering at the stage door for several seconds, looking out at all of us. We call him a rock-star author, but Gaiman's look of wonder and genuine flattery as he gazed out at the crowd shows that, at the very least, if he is indeed a rock-star, then we have to let go of all those negative connotations, once and for all.