Fantasy author Terry Pratchett died today at age 66 after a long struggle with Alzheimer’s disease, reports BBC News. Markedly known for the success of his Discworld series, Pratchett wrote over 70 books over the course of his life.

Larry Finlay, managing director of Transworld publishing company, had much to say about Pratchett’s passing.

“The world has lost one of its brightest, sharpest minds,” he announced. “Terry faced his Alzheimer's disease (an ‘embuggerance,’ as he called it) publicly and bravely. Over the last few years, it was his writing that sustained him. His legacy will endure for decades to come.”

Although Pratchett was diagnosed with Alzheimer’s in 2007, he still continued to write, completing his final book last summer. According to Finlay, the author passed on surrounded by family.

Other than the Discworld series, Pratchett was also recognizable for his satirical viewpoint and interesting attire. At one point he held the distinction of being the second most-read author in Britain, only beaten for the number one spot by J.K. Rowling. 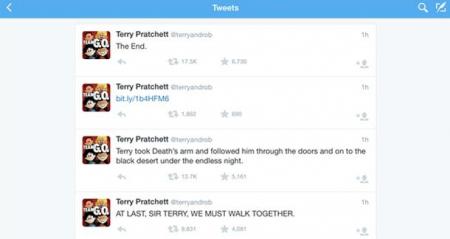 The announcement of the author’s passing was posted to his Twitter account in a series of tweets this afternoon, the first of the tweets portrayed in all capital letters in an ode to Pratchett’s portrayal of Death in his novels.

AT LAST, SIR TERRY, WE MUST WALK TOGETHER.

Terry took Death’s arm and followed him through the doors and on to the black desert under the endless night.

The news of Sir Terry Pratchett’s passing leaves my heart heavy. The world has lost yet another great writer, and I can only hope his memory will live on in the words he wrote.