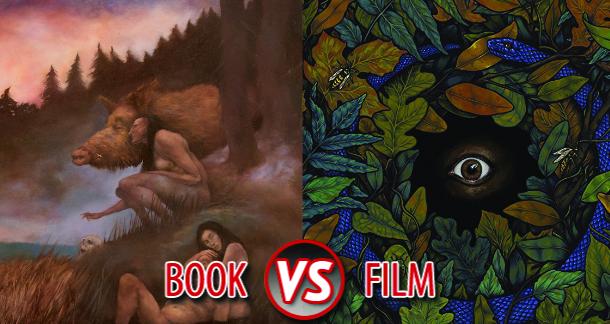 It's a generally accepted rule that a great film adaptation of literary material simultaneously stay faithful to the source while also forging its own path, i.e., creating a narrative that is medium-appropriate without completely alienating the story's roots. This is a delicate process, and one that has failed on numerous occasions despite the filmmakers' best intentions (Gone Girl comes to mind, for instance), but one which yields more successes than either extreme: when a film completely abandons its source material—like the maligned Stephen King "adaptation" The Lawnmower Man; or when an adaptation is so faithful to its source material it becomes rigid and stale—as with another King adaptation, the 1997 miniseries of The Shining.

...even those unfamiliar with [Barron's] work will admire this gorgeously eerie entry into the cinematic horror canon.

They Remain, a new horror film from writer and directer Philip Gelatt, is an exception that proves this rule. It takes very few liberties with the novella upon which it is based—Laird Barron's excellent "-30-," which can be found in his collection Occultation and Other Stories—and yet it manages to crackle with an energy both vibrant and menacing. To put it another way, if most excellent film adaptations can be considered cousins, Gelatt's film and Barron's novella are more like nearly identical twins, save a few differentiating marks that distinguish the pair as remarkable examples of their respective mediums.

Both film and novella begin with the same first line: "You know how this is going to end." Barron uses this prophetic statement to introduce two of the narrative's central themes, paranoia and delusion, straight away. The unnamed male protagonist, an expert wildlife tracker and outdoorsman, thinks he heard his female co-worker, a data analyst and biologist (also unnamed) speak these words, but she denies having said anything. We quickly learn the pair were lovers at one point in time, and there is a potent blend of bitterness and residual sexual tension between them. They've been sent out to a remote stretch of land that Barron describes as stony, brushy, and hostile, with "skies that, come sunset, darkened like blood edged in molten gold." Neither know exactly why they're stationed in this unforgiving landscape, only that their Weiland-Yutani-esque company wants them to observe the strange behavior of the wildlife there and possibly determine the cause. Also of note, but in no way a correlative—at least the company insists—is the metaphorical (possibly literal) ghosts of a murderous Manson-like cult known only as The Family that once used a section of this sprawling, inhospitable land as their killing grounds. Rumor has it there are still countless Jane and John Does buried in that area, called Site 3 by our protagonists, though a recent CSI dig yielded no skeletal remains. 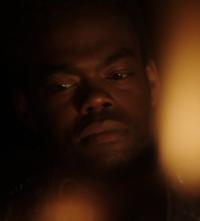 The pair perform their tasks, though boredom and heavy drinking soon kick in, as they inevitably do. The man discovers an abandoned coyote den that, based on the footprint patterns, seems to be a forbidden place for the animals. He eventually moves further into Site 3, where he believes a former Family member might be squatting, reliving his glory days. Despite this, he dismisses the woman's tales of voices talking to her from the bushes and mysterious, middle-of-the-night knocks on the main hatch door of their habitat as nothing more than paranoia. The irony that he himself is succumbing to madness is not lost on us.

Meanwhile, the woman has an unnerving and technically impossible encounter with a millions-strong nest of wasps and discovers an equally impossible animal horn in the woods, one that appears to have belonged to a ram the size of a baby elephant. Neither character knows what the fuck is really happening, and to a degree, neither do we (in the best way possible), though the woman speculates it has something to do with the land itself, that all animals, humans included, are drawn there "by a lunatic music only the Devil's own can hear." This wonderfully sums up the bloody pall that seems to have descended over the landscape like a permanent sunset, and we read on, captivated, horrified, and yet prepared for the doom and destruction prophesied at the story's beginning.

Gelatt's most significant change to Barron's novella concerns this damned backdrop, trading in the "Howard Hawks landscape" of rock and dust for lush green plant life and dense, fairytale-like woods. One immediately wonders if this switch in scenery will actually work, given Barron's demonic personification of the land, but the filmmaker pulls it off in spades, precisely because his landscape is so contrapuntal to the pitch black narrative. As we watch the man and woman descend into a waking nightmare, we see the leaves turn from springtime shades to those of fall—bloody reds, fiery oranges and yellows, beautiful and yet subtly symbolic of the characters' fevered, rapidly changing minds. 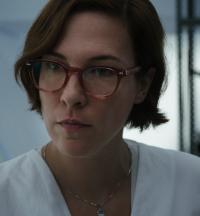 In the film, these tormented characters have names: Keith (played by William Harper Jackson) and Jessica (Rebecca Henderson), which is a nod to an exchange in Barron's story, whereby the female character compares herself and her companion to actors Keith David and Jessica Lange. This isn't the only movie reference found in "-30-," nor is it the only meta moment in They Remain. Barron's prose leans heavily toward sight and sound, and he demarcates dialogue with hyphens rather than the more traditional format of 'Character said, "Dialogue."' In this way, the story almost reads like a screenplay, and this combined with his characters' comparing their situation to a horror film, one suspects the author set out to write a kind of "literary horror film," or rather, a horror film unfolding within the realm of literature.

As such, Gelatt's adaptation is basically a film of a film within a novella, and this filmic self-awareness is perhaps best exemplified by a moment around the beginning of Act II. Jessica describes a nightmare she had the previous night, in which "a hideous redness covered everything," and a group of blurry figures that may or may not have been human surrounded her. Keith asks how this dream ended. She replies, "That's the thing: I don't know if it ever did."

Here, Jessica looks directly into the camera, glances away again, and says, "Everything just went black."

The screen smash cuts to black.

Jessica's dialogue is taken almost verbatim from Barron's text, save for one telling omission:

—Is that when you woke?

—I don't think I ever did, she said. —Everything went black. Like the movies. (emphasis mine)

These meta interjections might seem ostensibly hokey, but they in fact give the film a sense of dangerousness, as though anything might happen between now and the climax. And indeed, despite the fact we've been told that we already know how this will end, it is doubtful anyone can really guess just how awful these characters' fates turn out. And to Gelatt's credit, this remains true even when the viewer has also read Barron's novella: the climax is every bit as shocking and visceral on the screen as it is on the page.

And this is also the case for every aspect of the film. The pacing is superb, reminiscent of other slow burn gems like The Shining and The Witch, and both Harper Jackson and Henderson deliver outstanding performances that simultaneously elicit sympathy and cause us to recoil in equal measure. Fans of Barron will no doubt love this meticulously-crafted adaptation, but even those unfamiliar with his work will admire this gorgeously eerie entry into the cinematic horror canon.

They Remain debuts in New York City on March 2nd and in Los Angeles on March 9th.