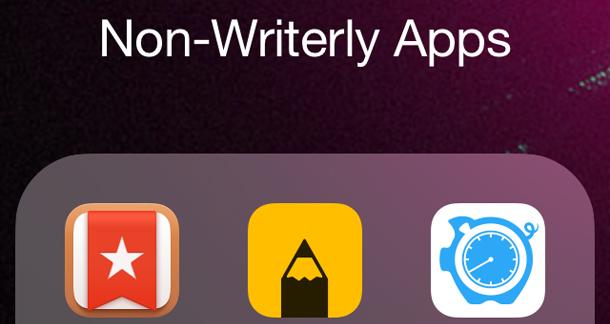 At this stage in human evolution, we've become a society dependent on handheld computers and smartphones to keep us on task, on time, and informed. And while it's generally a good idea to disconnect from net-based distractions while in the act of writing, these technological advancements are just as beneficial to writers as anyone else. I've covered numerous iOS and Android applications geared specifically toward writers of various ilk, from prose fiction authors to screenwriters, playwrights, and journalists. Now I'd like to talk about apps that weren't necessarily designed with writers in mind, but are nonetheless fantastic tools for pros and those just starting out.

But before we dive in, here's a quick disclaimer: you will notice that Evernote (Apple; Android) and Dropbox (Apple; Android) are not on this list. While I rely on these services and believe them to be one hundred percent essential to my writing life, I've already written about both in detail in other columns. For a discussion on the importance of Dropbox, check out Paperless Writer: Five Steps To A Successful Digital Rewrite (and incidentally, my first column here at LitReactor); for Evernote, I'll point you to First Drafts In A Mobile Landscape: Five Word Processors for Tablets and Phones. Furthermore, I really love the app Songza for its mood-based, commercial free playlists, but I covered this one previously as well, in 9 Great Albums To Accompany Your Writing Process.

Alright, now that's out of the way, let's do this. 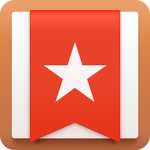 I use the built-in Reminders app on my iPhone for pretty much everything, but there was one feature not currently available that would make my life easier (see below), so a third-party alternative was in order. Problem is, there are so many to-do and reminder apps out there, searching for just the right one can be daunting. Fortunately, most of them aren't all that great, and Wunderlist—one of the most recognizable names in checklist software—comes out on top. Now, that may sound like a back-handed compliment (the app is only better in comparison to its crappy competition), but I have nothing but love for Wunderlist. It sports a clean, elegant design, great use of swiping gestures, the ability to set date stamps for your reminders, and most importantly, that one feature the native Reminders app doesn't offer: the ability to create a note directly from your web browser via the share icon. Why do I need this? So that if I'm considering a particular magazine with reading periods for submissions, I don't have to copy their URL in Safari and paste it into my Reminders note. Share icon > Wunderlist icon > Select my Submissions folder as the destination > Tap Add to Wunderlist. Done. Granted, I do have to open the main app to add the date stamp, but it's two steps less than manually adding everything to Reminders, so I'm still pleased. 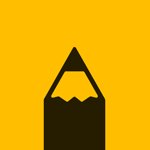 Picture this: you're in a meeting for your day job, and it's pretty boring, all things considered. You start to daydream, and a killer idea for a story pops into your brain. You need to write it down or else you'll forget it, but you don't have a pen and paper, and the boss doesn't like his/her employees "goofing off" on their phones during important meetings. You can be discreet about it, but there's the process of unlocking the phone, accessing your note-taking or journaling app of choice, and tapping out the idea on your tiny keyboard. However, if you'd like to remove a few of those steps, download Neato, a notes app you can access from your home screen without ever even unlocking your phone. See, iOS 8 lets you add custom widgets to your Notification Center (or NC) (swipe down from the top of the screen, where you see that little line). Install Neato from the App Store, access NC, scroll to the bottom, tap Edit, and add the app. You can choose where in NC Neato (and all apps for that matter) will appear. Place it where you want it, and voila! quick and easy notes direct from Notification Center. Now you can jot down that story idea with greater efficiency, and you can even send it to Evernote (without specific notebook access, mind you), email, Twitter, or SMS. Bear in mind too that Neato provides no auto-correct functionality, so you either have to be a master thumb-typist or one not perturbed by gross typos.

Note: While Neato isn't available for Android, you can check out Notes Widget HD. It operates on the same principle. 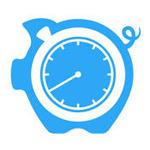 If you guessed this app is geared toward freelancers who get paid by the hour, then you would be correct. HoursTracker's design and interface is simple and minimal, two things I dearly love in an app. Just type the name of your job, your pay rate, cut-off times (if you're allocating only so many hours per day on a particular job), and a slew of other options to best customize the job's details. You can view and edit work times in Notification Center as well, which is nice and convenient. You could even utilize this app for your fiction writing, if you're working on several projects at once, or just want a simple way of tracking your hours spent writing on a day to day basis. The free version of HoursTracker lets you work three jobs at a time and is ad-supported. For $4.99 you can upgrade to the Personal Edition, which removes the ads and ups your job limit to five. If you want unlimited jobs, pony up $8.99 for the Pro Edition. This may seem steep, but if you're a professional freelance writer, it's a small price to pay for years of use. 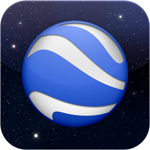 Ever see the movie Sky Captain And The World of Tomorrow? It's a fun sci-fi movie from 2004. A good chunk of the film is set in 1939 New York, and writer/director Kerry Conran (alongside his effects team) painstakingly recreated the look and feel of the city during this period using old photographs and the original King Kong as their inspiration. At the time, Conran had never visited NYC, but his cinematic adoration of the Big Apple shines through every minute detail, proving you don't necessarily have to "write what you know" where physical places are concerned. With the advent of Google Earth, it's now all-too easy to travel around the globe and see cities you've never set foot in personally—a magnificent tool for writers needing realistic descriptions of as-yet unseen buildings, street signs, lamp posts, etc. Or, you can use it to revisit places you've left behind, as Richard Thomas did while researching his novel Disintegration. From his recent Storyville column Writing A Novel Without Plotting It Out:

I knew that this novel would take place in Wicker Park, a place I used to live, so I did a quick search finding images of the streets, bars, parks—anything that would remind me of what the neighborhood looked like. Keep a folder running, and if you run across images, in film, on television, comics, art galleries, you name it—save an image or take a screenshot or photograph and use it as a reference point, a quick way to tap into the emotion and arc of your novel. 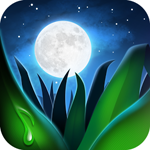 Writers need sleep, just like everyone else. It's just so damn hard to shut off the brain sometimes. That's my problem, anyway—I think about stories I'm working on, stories I'm going to work on in the future, I analyze books I've read and movies I've seen, I pour over conversations and interactions from the day, etc. Hours go by before I finally fall asleep. My mind needs a good distraction, something to divert my attention away from the deluge of thoughts coming down the pipeline. Enter Relax Melodies, a collection of soothing sounds and music you can tailor to your specific taste. If you like the sound of ocean waves coupled with a thunderstorm, or gentle winds blended with classical piano, or even a whirring fan mixed with a vacuum cleaner and a cat purring, this app has you covered. You can play a single sound effect, or combine however many you want. Relax Melodies also features binaural beats, which I find impractical for sleeping since they require headphones, but quite nice for a quick stress-reliever when I'm awake.

These five apps only graze the surface of the possibilities out there. Tell us about any you use on a daily basis that directly impacts your writing life in the comments section below.

I believe that every self-respecting writer should have an instant messenger that allows you to easily transfer files. Communicate with your audience to stay in trend. I've been waiting for a long time for the possibility of adding important functions for me in WhatsApp, but they forgot about it for a long time, but gb whatsapp download 2022 The whole list of interesting functions is, namely hide writing status, hidden chat feature, hide recording situation, add stickers from Google Play, connectable with WhatsApp web (features don’t work there), audio share up to 100 MB.  And now I'm very happy with how this program works and how comfortable it has been for me to communicate.

I think the kinemaster mod apk download at ModCombo, is a useful editing app. Everyone should have this app in their phone.

Thanks, I really like your theme. tải game mod completely free for mobile devices.

I think you must add the gb whatsapp apk 2022 that is modified version of WhatsApp. it has many cool features that everyone wants nowadays.

If you don't know how to charge computer in car so you must visit this link https://www.laptoprex.com/how-to-charge-your-laptop-in-the-car/

If you want a different GB Apps with amazing features so you must visit this website https://igbapps.com/

I think the kinemaster mod apk download at techloky, is a useful editing app. Everyone should have this app in their phone.