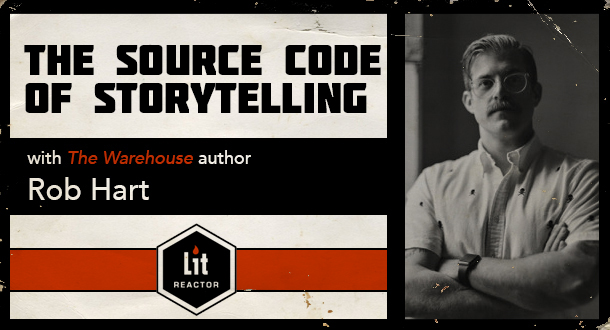 Your Instructor: Rob Hart (author of The Warehouse)

Writing can be hard to teach. How to craft a languid, luminous sentence that lodges itself in a reader’s heart? Whew. That comes from a place that’s hard to quantify.

Sure, there’s plenty of art in the machine, and everyone’s process is different. But there’s a source code to telling a good story. Basic tenets that, once you see them, you can never un-see them. And they’ll inform your work going forward, helping you to craft the kinds of stories that demand to be read.

The focus of this four-week workshop is to find ways to look for that code, and build a process around it, with an eye toward crafting stories that are commercially appealing.

Rob Hart is the author of The Warehouse, which imagines a world where one company dominates the online retail economy and puts its workers into dormitory housing, so they can better fulfill the needs of consumers. It sold in a pre-empt to Crown at Penguin Random House. It also sold in more than 20 languages, and the film rights were optioned by Ron Howard and Imagine Entertainment. His next novel, The Paradox Hotel, is due out next year.

This class is open to all skill levels, and includes written lectures and homework assignments, to be critiqued by both Rob and the class. You can come in with a work in progress, or completely cold. Some of the concepts here were covered in Rob’s previous LitReactor class, The Big Idea.

Learn the difference between a good idea and a good character, and how to start roughing out your idea, including discussions on research, the power of forgetting, and the importance of reading.

Assignment: Rough out your elevator pitch and your characters.

How to underpin your story with a solid structure and set yourself up for success in the early stages, including how to outline and why it’s important.

Assignment: Write a synopsis and start outlining your story.

A wide range of examples that will help you see the mechanics that go into telling a good story, including The Simpsons Rule of Characters and the Sexy Beast Rule of Dialogue. Plus, one of the best secrets for pulling your reader through a story.

Assignment: Write the first five pages of your story

WEEK 4 - Editing, and Everything After

Learn how to build an editorial process for yourself that’ll bring you closer to a finish, sellable product, plus tips and tricks for navigating what comes after you type ‘the end.’

Assignment: Turn in edits on the first five pages, and start planning for next steps