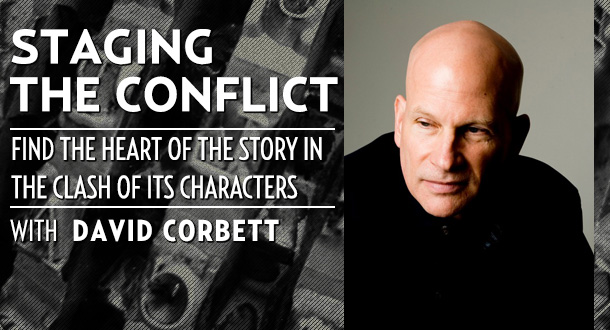 In this four-week workshop, award-winning author David Corbett will guide you through an exploration of how to frame the conflict of a story through compelling, essential characters.

Your Instructor: David Corbett, author of 'The Devil's Redhead' and 'The Art of Character'

And in this 4-week workshop, David Corbett, prize-winning author of The Art Of Character, will guide you through an exploration of how to frame the conflict in a story through compelling, essential characters.

The class will first explore the two crucial roles creating the “Unity of Opposites,” the core conflict at the heart of the story: the protagonist and the opponent. This exploration will include establishing the battle of moral visions driving the action—the premise and the counter-premise—as well as understanding the values the characters honor and the worlds they seek to create, defend, or maintain.

Next, students will learn how to develop those moral visions and worlds through the secondary characters, with specific attention to their dramatic roles and functions, with an eye toward establishing “Four-Corner Conflict” in order to create moral complexity and heightened suspense and dramatic tension.

Finally, the class will explore how to use structure to tighten and underscore the conflict created through the characters, with special attention to tackling specific story structure problems: the love story, the mystery, and stories lacking an opponent, among others.

Week 1 — The Protagonist: The Moral Messenger

No story can move forward without understanding not just the protagonist’s outer goal but his inner/unconscious yearning, which establishes the stakes, determines his inner weakness, wound, or flaw, and predetermines the moral arc of the story

Week 2 — The Opponent: The Character of Conflict

To create a “Unity of Opposites,” you need an opponent with the desire, will, and power to destroy, deny, or claim for himself what the protagonist wants.

The protagonist and opponent do not act alone; they act on behalf of values they prize and worlds they cherish—values and worlds embodied in secondary characters who help create moral complexity and narrative richness.

Week 4 — Structure: The Scaffold of Story

Once your main and supporting characters are established, you need to find the best structural form for dramatizing the conflict to create tension and suspense as well as emotional impact.