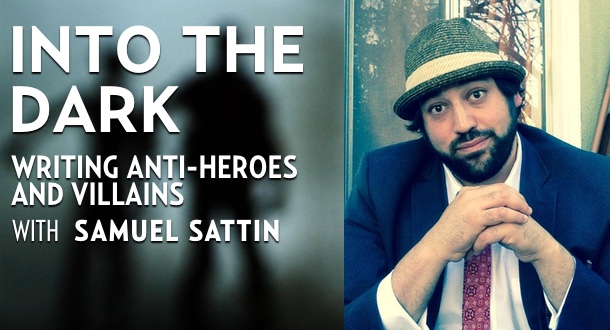 Learn what makes us identify with anti-heroes and villains, and how to successfully write them—without crossing the line into caricature.

"Purity is a negative state and therefore contrary to nature." —William Faulkner, The Sound and the Fury

Humans are imperfect, and often it's our darker elements, the shadowy parts, that emerge in times of duress.

In fiction, in myth, in any sort of story, we are always more interested in an evil character than we are in a good one. And when an evil character is the main character, it forces readers into a situation in which they have to identify with someone they'd prefer to loathe.

In this four-week workshop, Into the Dark, Samuel Sattin, author of the critically-acclaimed League of Somebodies, will help you understand what it is that goes behind the creation of antiheroes and villains. And along the way, you'll step up your game on how you think about and write characters.

From Satan in Paradise Lost to the Judge in Blood Meridian and Walter White in Breaking Bad, you'll explore the spectrum of anti-heroes and villains, and the subtle differences between the two. You'll delve into what makes readers identify with loathsome characters—and how to create them successfully without crossing the line into caricature. And you'll discuss what keeps us rooting for certain bad guys to get away, even when we know that they're wrong.

Along the way, you'll study novel excerpts and short stories, as well as examples from television, comics, and film. Optional readings will include craft essays (made available by the instructor) from Stephen King and Vladamir Nabokov.

In this class, you're going to study the dark side of humanity.

And you're going to have fun doing it.

* Because this class runs through the holiday season, assignment deadlines will be flexible, and extra time will be built into the schedule if required.

Week One: The Dark Half

You'll begin with examining various character archetypes as they reside along a spectrum. Sam will provide hand-drawn charts and utilize his secret weapon: Dungeons & Dragons character alignment system; a brilliant way to educate on this subject. An antihero need not fall into a set moral category anyway, and it’s important to be creative when you consider someone’s moral character. It’ll be his goal to make sure that students walk away from the first week knowing that it’s important to view morality as a constellation of traits, as opposed to points along a set spectrum.

Assignment: You'll create a character utilizing the Dungeons and Dragons alignment system. But with a caveat: You can’t use genre elements...

Week two will focus on putting a successful antihero into practice. You'll be looking at a lot of direct examples from literature and film during this portion of the class, and attempt to chart common traits exhibited by all antiheroes. You'll also talk about when it’s a good idea to bend the rules, and when an antihero is in danger of crossing over into villain territory.

Assignment: From Mary Shelley’s Frankenstein to Dracula and The Strange Case of Dr. Jekyll and Mr. Hyde, there is a time-honored tradition of writing about misunderstood monsters. In this exercise, you're going to do the same...

Villains will be the focus of this section. Although they aren’t as complex or as difficult to draw up as antiheroes, the goal will be to make sure you can see the importance of making sure these characters don’t spill over into caricature. You'll be looking at examples of successful villains.

Assignment: The goal in this assignment is to create another monster, but this time of the human kind...

In what will likely be the wildest and most dynamic part of the course, the students will set the antiheroes and villains they created against each other in a narrative. This will be particularly important, because of the fact that the students will have to demonstrate their grasp of how antiheroes and villains are similar, but different. The lecture will focus on walking the fine line between dubious protagonist and evil doer, and lines will be drawn.

Assignment: Now that you’ve created your antiheroes and villains, you'll set them against each other...

* Each assignment will be critiqued by Sam, as well as your fellow classmates. In addition, Sam will be available for questions and guidance along the way.

"League of Somebodies reveals something fundamental about humanity: we all wish to change, to become the most powerful version of ourselves."

"Somebodies is a superhero story the way Mel Brooks' Young Frankenstein is a tale of classic horror; It's about super-powers and alter-egos, yes, but underneath the rollicking adventure and madcap comedy, Sattin has managed to to lovingly de/reconstruct the myth of the uber-masculine superhero."