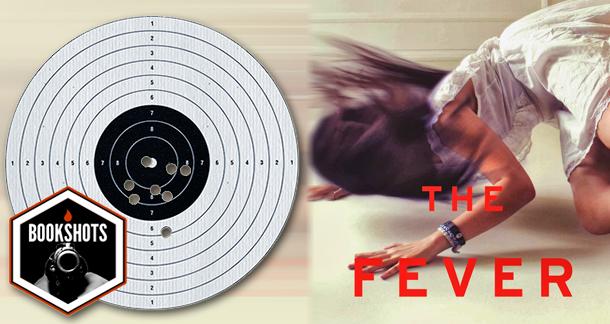 This novel breathes. It is a lurking shadow in your bedroom at four in the morning, this shapeless creature that terrifies and thrills at the same time.

Megan Abbott, a name you probably know, even if you haven't read her work. Her 2012 novel Dare Me was much celebrated both critically and commercially, and we featured it as our February Book Club selection. More info about Megan at her website.

A Midwestern town is gripped by a strange fever or illness that causes high school girls to erupt in erratic behavior. One girl, Deenie Nash, appears to be immune. It's a plot reminiscent of the Dancing Plague of 1518, but that is also ripped from today's headlines (I would advise waiting to click this link until after you've read the book, though).

The author's chosen title is perfect, as it encapsulates everything Abbott lays on the table, both from a plot and thematic standpoint. That being said, you could go with something more lurid (and exploitative) and call it What Ever Happened to the Girls of Dryden High?

Jack Finney's The Body Snatchers comes to mind, as well as the works of Edgar Allan Poe and Joyce Carol Oates. Or any slow-burn horror/noir/mystery narratives.

The Fever is told from the viewpoints of the Nash family: the aforementioned Deenie, her father Tom, a chemistry teacher at the high school, and her brother Eli, a broody hockey player.

For Deenie, Ellie Kendrick (Game of Thrones), because I don't know that many young actors, and the people I envision in books often spring up from the shows and movies I watch; for Eli, because of the same reason above, Ansel Elgort (Carrie, The Fault in Our Stars); and for Tom, simply because the character is a chemistry teacher, Bryan Cranston.

I could easily reprint the entire book here, because Abbot writes damn good sentences, but if I must choose:

Dryden was the cloudiest city in the state, the sky white for much of the year and the rest of the time a kind of molten gray broken by bright bolts of mysterious sun.

I don't want to say too much about The Fever, because in many ways it's a book you have to live inside for a while. But know this, if you do so, it will live inside you far, far longer. It doesn't haunt you like a poltergeist—by destroying your home with malevolence—but it does linger on and whisper to you at night.

Like its namesake, this novel infects you and grips you. Gets under your skin. It's a mystery narrative, full of confusion, misdirection, intentional contradiction, and this pervasive sense of dread that looms over the characters like the permanent clouds of Dryden. Abbott employs many red herrings, but she does so expertly, never leaving a plot turn unresolved. Just when you think you've got it figured out, she pulls the rug out from under your feet. And, without giving too much away, by the end of the novel you're still guessing, even though Abbott has resolved everything. You'll see what I mean when you read it (and you should read it).

These elements also make The Fever a horror narrative, particularly when combined with Abbott's exploration of present-day anxieties—our fear of advancements in medicine and technology, for instance—as well as the age-old fears of death, disfigurement, detachment from the self, and, of course, the unknown. In this book I see a return to older horror sensibilities; it's all about the gloomy mood, the atmosphere of dread, and brief flashes of grotesque (but not gory) imagery. It's the modern equivalent of horror best read by candlelight.

This novel breathes. It is a lurking shadow in your bedroom at four in the morning, this shapeless creature that terrifies and thrills at the same time. In some ways, you want to forget it, but you can't. You find yourself coming back to it every night, watching it, studying it, trying to understand what makes it tick. Trying to get a better view of it, to see what it really looks like. Perhaps it goes without saying, but The Fever is easily one of the best books I've read this year. Highly recommended.

Robert.B from Northern Ireland is reading The Last of the Savages By Jay McInerney June 18, 2014 - 8:09am

I'll definitely be picking this up as soon as it comes out over here. I loved 'The End of Everything' and 'Dare Me'.

Refering to the true story this seems to be loosly based on: what the hell happened??? did they ever figure out wtf? I followed this story for a week or so when it happened because it was super interesting and weird, but now I can't recall any details specific enough to google it.