"Dare Me" by Megan Abbott 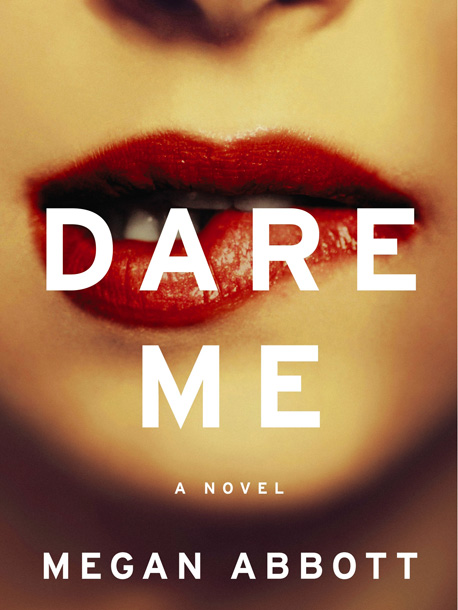 Synopsis: Addy Hanlon has always been Beth Cassidy's best friend and trusted lieutenant. Beth calls the shots and Addy carries them out, a long-established order of things that has brought them to the pinnacle of their high-school careers. Now they're seniors who rule the intensely competitive cheer squad, feared and followed by the other girls -- until the young new coach arrives.

Cool and commanding, an emissary from the adult world just beyond their reach, Coach Colette French draws Addy and the other cheerleaders into her life. Only Beth, unsettled by the new regime, remains outside Coach's golden circle, waging a subtle but vicious campaign to regain her position as "top girl" -- both with the team and with Addy herself.

Then a suicide focuses a police investigation on Coach and her squad. After the first wave of shock and grief, Addy tries to uncover the truth behind the death -- and learns that the boundary between loyalty and love can be dangerous terrain.

The raw passions of girlhood are brought to life in this taut, unflinching exploration of friendship, ambition, and power. Award-winning novelist Megan Abbott, writing with what Tom Perrotta has hailed as "total authority and an almost desperate intensity," provides a harrowing glimpse into the dark heart of the all-American girl.

Author: MEGAN ABBOTT is the Edgar award-winning author of six novels, including Dare Me, The End of Everything and Bury Me Deep. Her writing has appeared in Detroit Noir, Queens Noir, Phoenix Noir, New York Times and Los Angeles Times Magazine. She is the author of The Street Was Mine: White Masculinity in Hardboiled Fiction and Film Noir and editor of A Hell of a Woman, a female crime fiction anthology. She has been nominated for awards including the Steel Dagger, the LA Times Book Prize and the Pushcart Prize. Currently, she is working on the screenplay for her novel, Dare Me, soon to be a major motion picture.

Born in the Detroit area, she graduated from the University of Michigan with a B.A. in English Literature and went on to receive her Ph.D. in English and American literature from New York University. She lives in Queens, New York City.

I've been meaning to read something by Megan Abbott for a while now. And when I didn't have a book for February, Dennis and Josh suggested that I browse the LitReactor Staff Picks for some ideas. Rob posted this book as one of his favorites. It sounded fun, so I thought it would make a good discussion.

The story description reminds me of Heathers. And I love that movie. Can't wait to see what you guys think of this one.

This seems a bit like 50 Shades Of Grey. I mean the tone of the book, not the plot.
Has anyone read it already?
If it's a bit like that, than I might just sit this one out.

I've read it. There's no resemblence to 50 Shades whatsoever. I guess the synopsis seems a bit trivial, but the book is definitely well-written. There's a teenage tone to it (because yeah, it's about cheerleaders in high school) but it's very dark and very gritty.

@Bek ~ would you recommend it? Is it like Heathers-ish? The reviews on Amazon (although predominately good) really seem to be a love it or hate it kind of thing.

I wouldn't say it's a high read on my list, but I'd recommend it if you're interested in girl stories. Megan Abbot's written a bunch of classic noir stories in the past, so I think this book was a bit of a departure for her. Nevertheless, it's a good mix of Gossip Girl vanity mixed with the dark grit that Heathers had. Unlike Heathers, though, it's not a satire.

Just put it on my kindle and will get to it as soon as I am able.

I'm a little over halfway through with this.

Nobody has any thoughts on it?

I live teen girl stories, especially ones that get really dark, like this one. The story is heavy on popular high school dynamics, which isn't entirely realistic, but always makes for a good story. The 'cheer is life' metaphors did get a bit heavy-handed after a while, but Abbot's prose is pretty top notch, so I was able to read without getting TOO annoyed.

Some of the metaphors were nice. Abbott is a really good author. But some of those metaphors did toe the line, where you're almost rolling your eyes. But it is a 17 year old telling you the story. So I guess you keep that in mind.

So I was finally able to finish this, just now.

I story felt really long to me. I don't know what else to say about this than that though.

By the end, I was pretty drawn in. I liked the ending a lot. Coach telling her side of what happened was really well done. And then the reveals with Beth and why she was so crazy was also pretty good.

I have a hard time rating this though. Part of me really liked it. And the other part merely thought it was okay. I mean, it did take me a while to get through. I mostly read it at work off of my nook. And when I was at home, I kept choosing to read other things.

I'd probably give it 3.5 stars, but because there is no half star on goodreads, it'll end up with 3. I think I'm choosing to round down on this one.

Also - I have no clue where the 50 Shades comparison came from.

I liked Dare Me but it's not on my favourites list by any means. At its core, it's your basic high school story mixed with a murder, but even the mystery aspect as to who the killer was wasn't too difficult a solve. That said, I was pretty much drawn in by the prose and I'm planning on reading Megan Abbot's new book when it comes out, plus her back catalogue. She's a damn good writer, I just felt that as a story about teen girls, Dare Me wasn't all that compelling. It's hard to make these sort of stories all that original, though.

I think I'm in the same boat as you. Abbott's writing is really really good. But the story just felt like it was lacking something.

I think I ended up giving it 3 stars on goodreads.