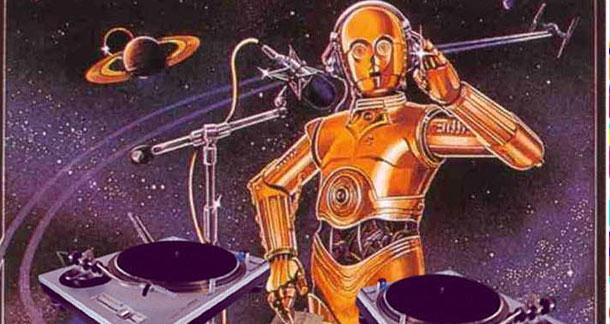 For a geek like me, spotting a science fiction reference buried in popular music is a rare and wondrous thing. In the middle school of life musicians are the cool kids, while online sci-fi columnists are… crap, this analogy is depressing. Regardless, it’s always nice and surprising to discover that creative people are being influenced by the same authors and stories I revere.

(Certainly, the rise of Nerdcore – not to mention the long tradition of Filk – has made referencing sci-fi in song a much more common phenomenon. But for this piece, I want to focus on nominally ‘mainstream’ music.)

With all that in mind, I thought it might be fun to start exploring sci-fi culture in music. We all know about the love ‘70s rockers had for halflings and quasars, but here are a few songs from other genres to show just how wide its spread has gotten.

The Mountain Goats – “Lovecraft in Brooklyn”

Where better to start than with a song that proudly wears its love for science fiction on its sleeve? The Mountain Goats set this Lovecraftian Apocalypse on a hot summer day in Brooklyn and the result is both fun and terrifying. Forget The Dunwich Horror, this is The Park Slope Horror. How can you argue with lyrics like “Rhode Island drops into the ocean”? You can’t. This song even inspired a great remix by rapper/producer Aesop Rock, himself no stranger to science fiction.

I will only add that the one time I saw John Darnielle live, he forever established his geek street cred by rocking a “Pluto Never Forget” shirt.

Let’s just say that, given my personal preferences, anytime an MC boasts he or she will “spit that Kurt Vonnegut…shit” I am 100% in. Electronica offers the educated listener a range of sci-fi references, from the song “Anakin’s Prayer” to his apparent love for L. Ron Hubbard's Battlefield Earth.

Tubeway Army – “Down In The Park”

Tubeway Army was a new wave band that showcased a young singer named Gary Numan and showed tons of love for science fiction. Their big single was titled “Are ‘Friends’ Electric” and their song “Listen to the Sirens” contains direct quotes from Philip K. Dick’s Flow My Tears, The Policeman Said. This track describes a hellish park where androids known as  “Mechmen” hunt humans for the enjoyment of a crowd.  Numan has revealed that he drew inspiration from both Dick and JG Ballard for the song.

Rightly famous for it Spike Jonze-directed, Christopher Walken zero-G softshoe video, this song also contains a clear allusion to Frank Herbert’s Dune. Bootsy Collins' vocals include the line “Walk without rhythm/it won’t attract the worm.” While some might have been confused by Parliament Funkadelic vet Collins’ words, those of us who are familiar with the fauna of planet Arrakis realized that Fatboy was talking about sandworms. Truly, this track is a thumper.

Less a lone reference and more an entire sci-fi novel set to music, this full-length album is the result of a collaboration among rapper Del The Funky Homosapien, producer Dan The Automator, and DJ Kid Koala. In telling the story of a one man’s struggle to survive a dystopian, intergalactic future, Del makes time to reference many classics of the genre. Maybe my favorite comes in the sprawling opening track, where Del brags that he is a ““Neuromancer, perfect blend of technology and magic.” William Gibson shout out FTW!

What are some of your favorite sci-fi influenced jams?  Let me know in the comments!

cdregan from outside of Philadelphia is reading The Corrections April 12, 2012 - 12:54pm

KLAUS SCHULZE. Space music. DUNE. Great when you are in a retro-future mood.

Darkest of the Hillside Thickets does mostly Lovecraft inspired music.  This one is on the story "In the Walls of Eryx", one of my favorites.  Good song, too.

Very happy to see Deltron 3030 made the cut. That album is life-changing.

Zammuto (of The Books)

really just the title, but it goes with the theme and even the picture up top

So many good ones:

I believe David Bowie's infamous Station to Station is based on a JG Ballard work.

Harry Nilsson's Pandemonium Shadowshow is pretty much entirely a reference to Ray Bradbury's Something Wicked This Way Comes. I think Hum's You'd Prefer an Astronaut also lifts heavily from Bradbury.

All the video's are amazing and the music rreally rocks. In today's technological world as science has influenced the world in every field, then creating a music with the help of science technoloy is amazing. get australian youtube subscribers

David Bowie is dead, this is so wrong. I liked his songs, lyrics http://lyricsmusic.name/david-bowie-lyrics/ and music

Records can be described in many ways. From songs to sounds, tunes to tracks, bangers to bombs, stinkers to steppers, our culture has more synonyms and nicknames for music than any other genre. <a href="https://www.mymusicviral.com/buy-soundcloud-plays-2/">My Music Viral</a>

This is also what I am looking for for mobile phones. The ringtones available on https://toqueparacelular.com/toques-para-celular-samsung/ are some of the coolest ringtones ever.