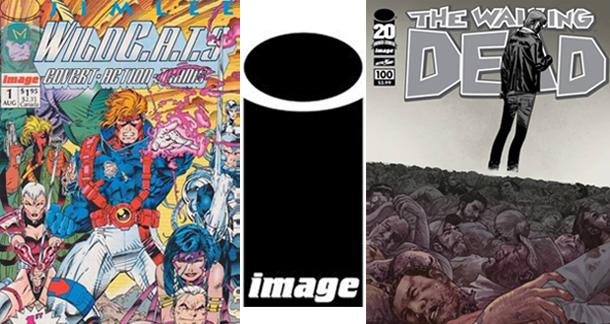 Whatever your feelings about 1990’s era Image Comics (mine are mostly a side-eye with a heavy dose of nostalgia), the company has done exactly what they set out to do when they started -- their version of what DC and Marvel were doing, but with creators owning all their own work.  And they were massively successful in that endeavor.

Now, 20 years later, Image’s line may be dramatically different, but their core values aren’t.  And that has helped them to create one of the most exciting lines of existing and up-and-coming new books that comics has seen in a long time. The kind of tent-pole books and ideas that are mainstream enough to launch successful television shows and film franchises.

While the big two continue to shed many great creators (and great projects) because they essentially treat talent as “work for hire,” Image has been able to court the brightest and best in the industry.  And by being innovative and forward thinking about their comics, they’ve become a powerhouse when it comes to pushing the envelope creatively. Case in point: 2012 saw the debut of two of Image's best current books in the form of Glory (a totally new and atypical female superhero tale) and Prophet (a fascinating sci-fi epic). Both are bold and unexpected takes on two of the most side-eye inducing 90’s books Image had - Glory and well, Prophet.  But by putting inspired indie creators like Ross Campbell and Brandon Graham on these books, they’ve re-invented them in ways nobody could have expected. Add to that Image’s release of Graham’s excellent King City, previously tied up at Tokoyo Pop, and sublime books like Ed Brubaker and Sean Phillips Fatale, and Image looks like one of the most exciting publishers around. And that's before you consider that this year Image also scored Brian K. Vaughan's return to monthly comics with Saga, his epic space opera, which is, in this reader’s opinion, the best comic book on stands right now. Or that in 2010 Nate Simpson's Nonplayer #1 was so promising that Warner Brothers bought the film rights based on a single issue. Image is of course also home to the massively popular The Walking Dead series, which in addition to being the basis for the blockbuster AMC show of the same name, in July became the highest selling comic of the last century, selling out it’s landmark 100th issue on the first day with a reported 383,612 copies. But this success is nothing new. Let's not forget that the #1 comic in 1992 was Image's release of Jim Lee's WildC.A.T.S. #1.

It’s been an incredible few years for Image as they continue to re-invent themselves, proving that they’ve still got the vision and drive they had 20 years ago. It’s made them the most interesting of publishers.  But if anyone thought 2012 was the best they could do, they’d be mistaken.

Already this year Image has announced both the exciting mini-series Mara by Brian Wood and Ming Doyle, and a new Phonogram series from Kieron Gillen and Jamie McKelvie. Then, at San Diego Comic Con (SDCC) in July they unveiled an unbelievably powerful slate. The kind of slate you only get when creators respect you as a publisher and believe in your ability to deliver their books in the best way possible.  Take a look at just a few of the books Image has added for 2013:

Greg Rucka and Michael Lark’s gritty dystopian sci-fi thriller Lazarus, described by Rucka as “The Godfather meets Children of Men.”  (sidebar: Where do I sign up?!?! Seriously, show me!!!)

Kelly Sue DeConnick and Emma Rios’ Pretty Deadly, a classic western with a disfigured female assassin as the lead.

Chris Roberson, who made a vocal stand against DC based on the Before Watchmen controversy, will be making Image home for his new book Reign with art by Paul Mayberry.

Additionally Image is bringing back Brandon Graham’s Multiple Warheads, which only ran one issue via Oni in 2006 (due to Graham's health) and will now be an ongoing series, with an estimated five or six books a year.

Back in 2010, Greg Rucka famously left his gig at DC, and specifically a book and character we all knew he loved, Batwoman, to more proactively pursue his own creator-owned work, both in comics and prose. I had opined about what the big two had come to that they could lose such a talent as Rucka, not because he didn’t like the book or characters or creators he was working with, but simply because he knew at the end of the day it was in his best interest to move on with something he could invest in and own. It’s of note that Rucka has been working on Marvel’s Punisher since his departure from DC, but he’s signed no exclusive deals. Like Brian Wood, who also left DC recently and has new books from Dark Horse, Image, and Marvel, you can see Rucka's comics work popping up with a variety of publishers – Marvel, Oni, and Image . He also had his latest prose novel, Alpha, see release in May of 2012.

Even for top talent like Rucka, it’s hard to make a good living in comics. Not a lot of creators have vibrant, lifelong careers, instead experiencing an ebb and flow of popularity. And without stable jobs and things like health insurance and 401k’s they have to be very smart about that popularity and the money that comes with it.  Thus, no matter how much a creator may love working on some of the books that Marvel and DC offer (and some of those books are indeed tempting), at some point they have to step back and think about their futures. What properties will still provide for them when they’re no longer the “hot new kid?"  What publishers will allow them the freedom to not only create the best work possible, but to own it outright, and still has enough pull to get their books on shelves with the same exposure that DC and Marvel can?  The answer these days is largely: Image. And with such top tier talent flocking to Image, their reputation and stock only grows.

And let’s be clear, there are other excellent indie houses out there. From the more art-house based like Oni, Top Shelf, Fantagraphics, and Drawn & Quarterly; to great companies that also cater to the more mainstream like Dark Horse, IDW, and Archaia; to growing graphic novel houses like First Second, interesting fledging indie houses like Action Lab, Monkeybrain, and Red 5; as well as the brand new (and aptly named) Creator Owned, there’s a lot out there when it comes to interesting comics publishers. But Image is leading the charge with top talent and quality books. They’re the most interesting publisher on the field right now based on their exposure, forward thinking, creativity, and talent. They were game changers for comics in the 90’s and they have the potential to do it all again.