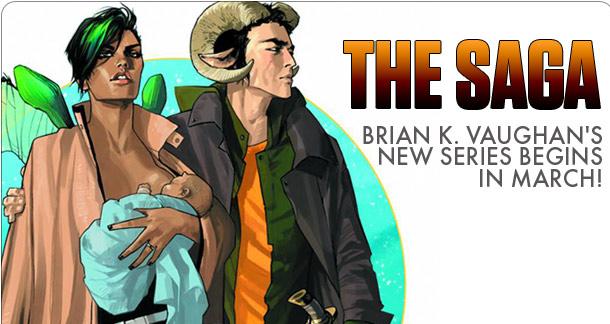 There's perhaps nothing more cliché than a childbirth scene.  We've all seen it done – frequently poorly – a hundred times before. So it only emphasizes Brian K. Vaughan's strengths as a writer that the opening in Saga #1 is a childbirth scene that is anything but cliché. Vaughan both celebrates and subverts our expectations of this scene by creating such fully realized characters that we get a sense of them instantly. His two leads, Marko and Alana, feel delightfully specific, the way real people do (or incredibly well crafted fictional ones do), and it is that specificity that roots out and destroys what is cliché. The attention to detail that can make a scene feel real and true as opposed to a lazy shorthand for the universal experiences of life. And thus, in the first pages of this deliciously long first issue, Vaughan sets the stage for doing something specifically amazing with Saga, and something more generally amazing with monthly comics - yet again - after far too long an absence from the medium.  Welcome home, brother.

Perhaps best known for his Eisner award winning Y: The Last Man, Ex Machina, and The Runaways, Vaughan, like many other excellent writers before him, was wooed away from comics by the siren song of Hollywood, where he garnered critical acclaim for his work on Lost. Vaughan also produced screenplays based on the aforementioned comics, none of which have successfully been made into films as of yet. Though many (yours truly included) hold out hope that some of those projects will eventually see fruition, it is with glee that comics fans welcome Vaughan back the medium, the place where he got his start, and the place we hope he will always return.

And Vaughan isn't the kind of creator that just dips his toe back into comics tentatively. He goes full bore. He jumps into an epic, ongoing sci-fi space opera. He doesn’t just open his book with a funny, gross, dramatic, and bold childbirth scene that begins with the words “Am I shitting?! It feels like I’m shitting!”; he delivers 40 more action-packed, emotional pages that can only be described as Romeo & Juliet meets Star Wars (which I stole from iFanboy’s Ron Richards, who borrowed it from his retailer James Sime). It is a nearly perfect descriptor, except that it doesn’t go far enough in describing what is so fundamentally great about Saga.

Vaughan also picks a strong and unique narrator, which is another immediate sign that you're headed into interesting territory. The obvious narrator for Saga would be either one or both of our leads (Marko and Alana), but instead Vaughan opts to make the narrator their just born child, Hazel, which completely changes the tone for the entire book, turning it on its ear in a fascinating way. Hazel’s telling the story, and though we trust her as a narrator (we have no reason to distrust her), we also instantly understand that she is relaying something that she could not possibly have remembered for herself. And that paints everything that happens with an interesting new brush, gives everything a new dimension and perspective.  It certainly doesn’t hurt that artist Fiona Staples hand letters all of the internal narration, and lets it live outside of narration boxes, wandering freely across the pages.  It’s an exceptional choice that gives the narration an urgency and a texture that something more traditional would lack.

Something Brian K. Vaughan knows well, especially from his experience with Y: The Last Man, is how to pick exactly the right artist for a project, and in tapping Staples he has done it again.  Staples' art effortlessly fleshes out Vaughan’s world, breathing life into it in the most natural way imaginable.  All of the characters, no matter how bizarre (and there are some quite bizarre characters), feel absolutely at home within the world they have built.  And in true collaboration, the characters are so well constructed and perfectly designed that you don’t for a moment question anything, which is critical in Science Fiction.  In Saga, there’s no time or desire to question anything. It’s all been so perfectly assembled, so perfectly timed, so perfectly toned, that you can only marvel at how well it works – like a symphony.

Staples' art feels deliberately loose and sketchy, serving the energy and pace of the book well, while possessing a precision and attention to detail that perfectly echoes the specificity Vaughan has created within the writing. They are working together in near perfect harmony here and it's obvious from something as fundamental as Staples' character design - her literal interpretation of Vaughan's creations. There's a simplicity in what she has done here, especially in the designs for Marko, Alana, and their child that feels incredibly detailed and well-considered, but completely unfussy. The characters we meet in just this first issue range from the races Marko and Alana hail from (longtime enemies), to an old woman with a Unicorn horn sticking out of her head, giant monsters of all sorts, a race of robots with television set heads, and a giant lying cat, which as the name suggests, can tell when people are lying (and can I just say that seems like the most amazing thing ever and where can I order one?). With all these crazy characters, this had the potential to be a mess, but thanks to Staples' confident and incredibly consistent style it all hangs together beautifully, fleshing out Vaughan's world in the most fascinating of ways. Staples' colors are subdued overall and tonally exactly where they need to be for a cast of characters living on a crappy planet called Cleve, and yet they always pop exactly when they need to.

There are periods in comics when "GRIM & GRITTY!" has been "a thing" - an inescapable and exhausting theme (we've got at least one foot in one of those phases right now), and you would think given the setup of Saga - people chasing lovers that everyone hates on a horrible lonely planet nobody thinks should exist, in the middle of a war I suspect nobody remembers why they're fighting - that it might be one of those "grim and gritty" books, but it feels like the opposite of that. This book has a deep beating heart, and it succeeds in capturing both the epic and the personal with equal care, raising it up beyond those that try too hard to be edgy or dark for effect. Vaughan and Staples have created something at once heartfelt and yet devoid of anything cloying or saccharine.

I don’t mean to make such a big deal about this, but I read a lot of really crappy comics, especially monthly comics. So it is such a refreshing delight to see something come along that is unapologetically bold. That is fearless in the choices it makes. That has the confidence of a writer that knows exactly what he’s doing, and entices you to come along with him, but doesn’t really care if you do or not, because at the end of the day he knows exactly what he’s doing. That’s how Saga feels. Every gorgeous page of it. And I just cannot wait to go on that journey with Vaughan and Staples. Based on what we have here I will be both greatly entertained and greatly moved, and that is always what I want from my comics.

There was so much speculation about whether Brian K. Vaughan could ever live up to Y: The Last Man. After reading the first issue of Saga, I’d say that the question should be changed to: can he live up to what he has promised in Saga #1?  I for one, believe he can. And so I say it again, welcome back, brother, you were sorely missed!

I've thought for a while that BKV does really great first issues. I remember reading the first ish of Y: The Last Man and thinking, "Sold!"

Many of the people who have windows 10 OS computer don't know how to work with files explorer and what are their file explorer windows 10 different usages. But with the help of this web tutorial anyone can easily get their all answers free of cost and share knowledge to others.