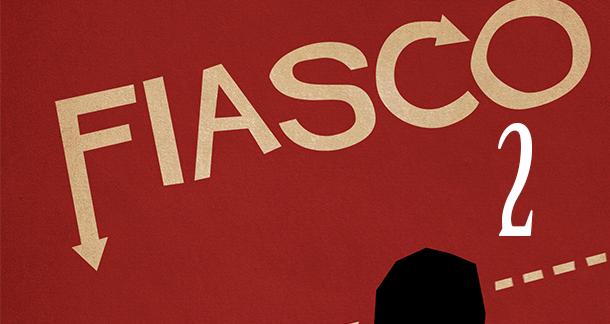 Welcome back to Brainstorming with Fiasco!

In the previous installment we figured out who some of the characters of our fictional town were and what kind of relationships connected them. Now it’s time to fill in some more Details about the town and what the characters are trying to do in it.

There are three types of Details:

Again, I picked up the same Playsets as last time and chose a few elements that I thought looked intriguing, considering what I know about my setting and the characters I’m working with. I compiled my choices into my own little Playset, with each Detail being assigned to a face of a six sided die. I rolled all twenty dice (four for each character, as illustrated in part 1).

Since we have five characters, we have five relationships and have to assign five Details. I think I’ll go with two needs, two locations, and one object. I’m not a fan of MacGuffins anyway, and I want to flesh out the town a bit if I can. 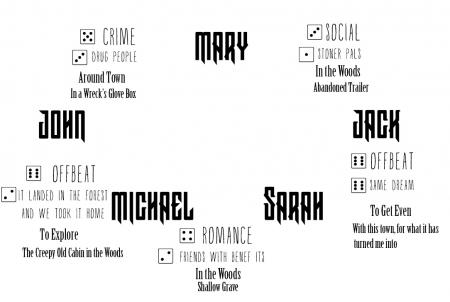 At this point, it's okay to cheat a little bit. We don't want our choices to be completely random. So while I let the dice dictate the general category of each Detail, I ended up just picking what sounded good to me when it came to the specifics.

So Sarah and Jack have a Need between then, namely Jack's need to get even with the town for what he has become. In case you don't remember from our previous episode, Jack is the teenage cult leader and well, it sounds like hanging out with eldritch entities might have had some... effects on him. Sarah is of course the town Sheriff and she's going to try and stop him. This is actually a good point. If a Need pops up between characters that seems a bit strange or like it doesn't fit, remember that it can also be a point of conflict, as in this case. Jack wants something, Sarah wants nothing more than to stop it from happening.

Next up, Jack and Mary, stoner pals, are connected by a Location: An abandoned trailer in the woods. Although it's not particularly interesting, it sounds like those two hang out there, so they are (or used to be) pretty close friends. This location might come in handy later, maybe for a scene where Mary realizes just how far gone her friend is and freaks out.

Actual play can be even more useful in exploring your setting and ideas, especially if you’re stuck somewhere and need some inspiration.

Mary and John, which I think we established have a dealer-customer relationship going on, get another Location: A glove box in a wrecked car, somewhere around town. Maybe it's a drop off point for drugs. Last time we said one of them is a pot dealer, but the glove box thing sounds like overkill for something like that. Maybe John has an oxy habit? Something worse?

Our protagonists, John and Michael, are connected with a Need, because I thought we had to have something strong there. I rolled ''To Explore'' and then ignored the dice and chose ''The Creepy Old Cabin in the Woods.'' I can easily tie that to their earlier relationship ''It landed in the forest and we took it home.'' Sounds like there are some really weird things going on in those woods and who better to investigate than our duo? I can probably connect it with Jack’s weird cult too.

Last but not least, the friends with benefits pair of Michael and Sarah. Things took a sinister turn when I picked up ''In the Woods'' and then ''A Shallow Grave.''

Honestly, I’m not really sure what this could be. Perhaps it’s a sign of things to come. Maybe they bury a body out in the woods halfway through the events of the novel, or  they killed someone as teenagers and this is a dark secret they harbor. Either way, I’m going to wait until later to figure out what it could mean.

We are now done with our tangled web of Relationships and Details, at least as far as Fiasco is concerned. We could however expand outwards even more, either by adding a few more characters and then creating new relationships for them or just by adding more Details to the existing ones (If a pairing has a Need, we could add a Location or Object or both).

For the kind of novel I've got on my mind, I don’t want to dig any deeper. I like to explore through writing. But there’s nothing stopping you from writing down a few more details and then discarding the ones that sound boring.

If you’d like to read more about Fiasco and how you can use it to generate plot lines for your novels or stories, check out Fiasco and the Fiasco Companion (this one has a few pages on how to use it as a creative tool).

If you find the whole setup interesting, I recommend you get some friends together and actually play the game as intended, either using a random Playset or one you made yourself with your novel in mind. Actual play can be even more useful in exploring your setting and ideas, especially if you’re stuck somewhere and need some inspiration. It’s pretty good for writer’s block, too.