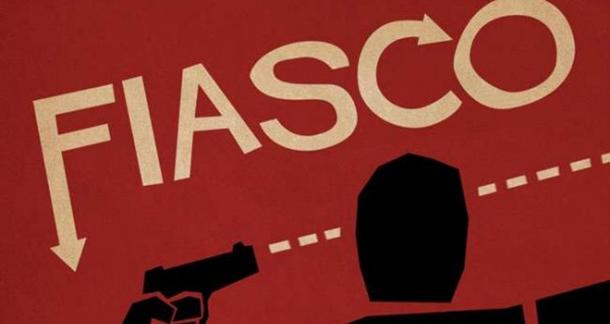 Having some trouble with your novel WIP? Not sure how to connect the dots or how to fill out that character roster? I'm here to help.

Fiasco is a tabletop RPG from 2009. It's ''a game about ordinary people with powerful ambition and poor impulse control. There will be big dreams and flawed execution. It won’t go well for them, to put it mildly, and in the end it will probably all go south in a glorious heap of jealousy, murder, and recrimination. It’s designed to be played in a single session, usually around two and a half hours, with no prep.''

For some reason my brain always wants to compare it to the Coen brothers movie Fargo: Intersected story lines that end up in some pretty grim/hilarious violence (that's a poor description of Fargo, but it'll do for our purposes today).

What we're going to do is take the the set-up part of the game and use it to brainstorm short stories and novel outlines. It's useful if you want to jump start an idea or perhaps come up with some subplots for your novel, but you can also use it to come up with some interesting locations or MacGuffins.

The Fiasco Companion book discusses its use as a writing tool and there's a series of blog posts on the Unleaded - Fuel for Writers blog. We're just gonna do things slightly different here.

Although there is no one standard setting, each game of Fiasco uses a playset that indicates the setting of that specific game.

Each playset consists of a basic description of the setting and:

Each group and each element within that group is numbered from one to six.

To put it simply, each playset has a theme and is essentially a list of Relationships (father-son, sheriff-criminal), Locations (behind the barn, the library), Needs (to get out of town, to get rich quick) and Objects/MacGuffins (a revolver, a picture of a woman).

Creating your own Playset

This website contains most of the available Fiasco playsets out there. They are free to download. If you happen to be writing something that fits exactly the theme of one of them (say, the Salem one, because you're writing a period piece about Salem witches), you're probably all set. If not, you'll have to do some extra work.

The novel I'm going to be using as an example, which I've already outlined to some degree, is about two buddies who are trying to save their small town from a Lovecraftian entity that is manifesting. I hunted around for playsets that dealt with small towns, horror and monsters.

I picked up Cults of New England, Dark Shadows, Last Frontier, Back to the Old House, Sucker Creek and a couple of others.

Let's start with relationships. I just went and picked out whatever looked good or seemed to fit with my plot, themes and established characters. Since I'm only experimenting, I didn't include any of my own ideas (I could have put in ''Childhood Friends'' or ''Diner Regular and Waitress'' since I know these two relationships will feature in the novel), since, well, I already have those. I'm hunting for new stuff. 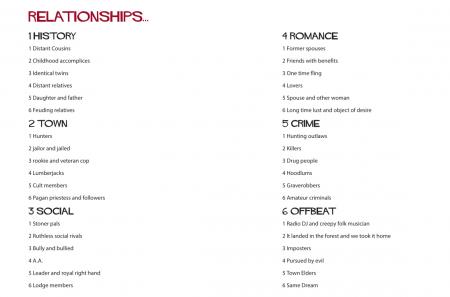 You'll need some dice. You can use an online dice roller.

The ''players'' in this imaginary session of Fiasco are the following novel characters:

There are a couple of ways to do this: The most boring one would be to look at the list and choose whatever looks good, removing dice as you go. This is likely to create boring relationships, but as the available dice become less, it might force you into some creative positions when it's time to choose Locations and Objects. I don't recommend it though.

Another way is to force yourself to pick different color dice each time, going from white to black and then white again.

My method is much simpler: I just look away for a second and grab whatever die my eye falls on first. It should work for online dice rolls too. You don't know what each number corresponds to anyway, so you're not likely to ''guide'' the results.

The first number you pick gives you the category (Town, Romance). Once you pick one, write it down between the first two characters. This is what connects them. Then move on to the next, without further defining their relationship. 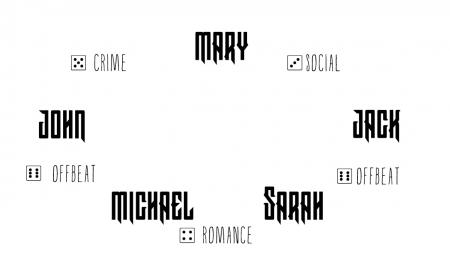 Got a nice spread, it should work out nicely. We don't know anything yet, just broad strokes.

You should now have five less dice than before, since you've used them up. Now you start over, this time choosing specific relationships between characters, belonging to the category that has already been established between them. So you pick a die, then find the corresponded relationship under the category you've already written down. 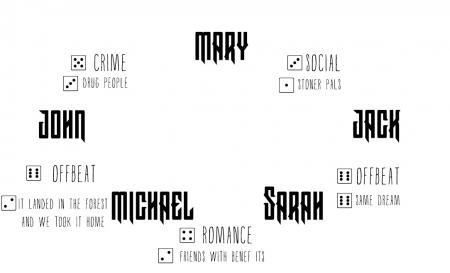 There's a part in the story where Michael and John are in the woods hunting and they find something weird. So this was a bit of a happy accident. I wasn't planning on them finding something to take back, but it's not a bad idea.

Michael doing the friends with benefits thing with the sheriff sounds like it could get complicated, so that's cool with me too.

Sarah and Jack (the human antagonist) having the same repeating dream. I can see it working and it implies they're both under the influence of the Lovecraftian entity, at least in the beginning of the book.

Jack and Mary being stoner pals tells me that Mary is likely Jack's schoolfriend. In this case Fiasco helped me create a whole new walk on role.

Mary and John being ''drug people'' likely means that either John sells pot to Mary or Mary sells pot to John. It doesn't say a lot, but it's a link that might come in handy as the plot moves forward.

To be completely honest, I ran the experiment twice and picked the most interesting results of the two to create a super-relationship map. You can do that too.

We got some pretty interesting results so far, the relationships seem likely and solid. Once we add the rest of the details it should really come together. The interesting stuff happens in part two, where we get to see what each character wants to achieve, which is really the driving force behind a book (and Fiasco sessions!). The Locations and Objects should be fun too, for fleshing out the setting and possibly supplying some MacGuffins that will interplay with the character Needs and create some juicy drama.

I'm in the middle of writing a short story using Fiasco, and it's going amazingly well.

Can only recomment it to improve your writing skills, because the limited (and random) options force you to try out things, character archetypes, and tropes you might not have considered before.

You can check out the story and the entire process behind every scene here.

I have this as well and I haven't done anything with but always wanted to. I've felt lost.

Your diagram really helped. I hope to see part 2 soon.

I've been wanting to write a circular 6 degrees story and now I can see how this could really work.