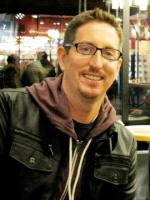 Paul Tremblay is the author of the novels The Little Sleep (Henry Holt 2009), No Sleep Till Wonderland (Henry Holt 2010), and the forthcoming Swallowing a Donkey’s Eye (Chizine Publications 2012). He is also the author of the short story collection In the Mean Time (CZP 2011). His essays and short fiction have appeared in The Los Angeles Times, Five Chapters.com, Weird Tales, Clarkesworld, Supernatural Noir, Cape Cod Noir, and Best American Fantasy 3. He was the fiction editor at Chizine and Fantasy Magazine. He is the co-editor of four anthologies including Creatures: Thirty Years of Monster Stories (with John Langan, Prime 2011). He is currently on the board of directors for the Shirley Jackson Awards. He has taught high school math for seventeen years. In 2009, he ran a two-day workshop at Emerson College on how to write horror. This past December, he was a guest lecturer for UC Riverside’s Low Residency MFA program. His 90-minute lecture was called: How to Write Literary Horror that Doesn’t Suck. www.paultremblay.net