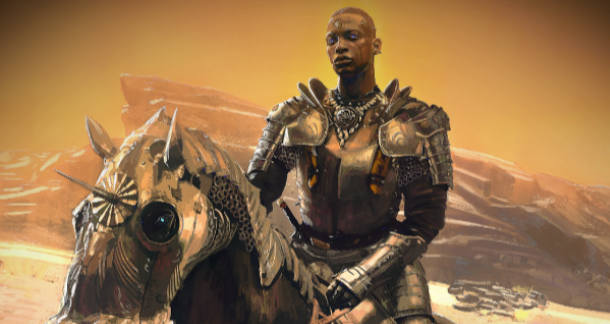 Not so long ago, diversity in the realm of speculative fiction was a major problem. And while it’s still an issue—and an especially glaring one here in America amid the long overdue racial justice movement—publications such as Apex Magazine, Nightmare Magazine, and The Dark make it their point to include marginalized voices of sci-fi, fantasy, and horror in their pages. Still, it’s necessary to release collections devoted exclusively to non-white writers (as well as non-cis-male writers and non-straight writers), as a means of celebrating their unique perspectives, be it in times of immediate turmoil, when a country’s systemic racism is under direct scrutiny, or when said country’s racism continues to fester beneath the veneer of a supposed “melting pot society,” unchecked, mostly ignored by those in power.

Arguably, the most effective means of making any kind of sociopolitical impact in fiction is to assure that the writings featured in a collection deliver their messages in an entertaining fashion. Speculative fiction exists as the supreme vehicle for this approach, as it utilizes aspects of spectacle and adventure that, to the naked eye (or to an ignorantly blissful mindset) means nothing beyond the surface. One may enjoy the spaceships, mystical creatures, and nightmarish visions at face value, but of course, doing so generates a half-assed understanding of the stories being told.

One cannot ignore the themes of these tales, unless one ignores the stories entirely.

A reader would have to be willfully blind to miss the social commentary on display in Dominion: An Anthology Of Speculative Fiction From Africa And The African Diaspora, a new collection now available from Aurelia Leo, a Louisville, Kentucky-based independent publisher. Themes of racism, the horrors of colonialism and slavery, sexism, toxic masculinity, erasure of culture, new ways vs. old ways, religious zealotry, and the propensity for darkness in every human heart all take center stage in the anthology. This isn’t to say the stories featured in Dominion—selected by editors Zelda Knight and Ekpeki Oghenechovwe Donald—are overly didactic; they quite successfully entertain as much as any piece of speculative fiction, it’s just that their deeper meanings aren’t veiled in any way. They’re an integral aspect of the writing, the fuel powering the spaceship’s engine, the magical practices behind the alchemist’s craft, the curse that raises demons (literally, in this case).

Take for instance “The Unclean” by Nuzo Onoh (dubbed “The Queen Of African Horror," according to her biography), which is about the ghost of a little boy haunting his mother, as well as a feminist examination of (post) colonial Nigeria, a place dominated by a confluence of ancient beliefs and Christianity that obliterate the rights and autonomy of women. Consider also “The Satellite Charmer” by Mame Bougouma Diene, which follows a young man, Ibrahima, as he simultaneously longs for a simple small town life and struggles with a strange attraction to a futuristic piece of mining machinery. The environmental consequences of this machine, its use as a weapon in a foreign war between Chinese corporations occupying several African nations, and the toll it takes on human life are all intrinsically linked to Ibrahima’s journey. And think about “Thresher Of Men” by Michael Boatman, which shows a goddess from African folklore exacting gory revenge on a Midwestern town with a race massacre and police shootings staining its history. One cannot ignore the themes of these tales, unless one ignores the stories entirely.

The three works mentioned are among the best in Dominion, though there are really no bad entries either. Other highlights include: “A Maji Maji Chronicle” by Eugen Bacon, about a time-traveling magician and his son weighing the consequences of meddling with history; “Convergence In Chorus Architecture” by Dare Segun Falowo, a surreal fantasy fable about the horrors of slavery that subverts the “hero’s journey” narrative archetype;  and “Sleep Papa, Sleep” by Suyi Davies Okungbowa, which explores black market body harvesting and what happens when someone inadvertently uses the corpse of a family member in their illegal trade (it isn’t good). But these are only a few of the anthology’s standouts. As legendary author and professor Tananarive Due notes in her introduction to Dominion, “Every selection is strong, each voice distinct, and I’ve never read an anthology like it.”

This last line isn’t hyperbole on Due’s part. Dominion is literally the first anthology of speculative fiction and poetry composed exclusively of African and African Diaspora authors, “a revolutionary compilation that bridges the oceans between us,” Due writes. And if the landmark status of this collection weren’t enough, it is listed as “Volume One” on its title page, meaning that we’ll have (hopefully soon) a sequel, continuing the good work of its predecessor.

I was into this issue and tired to   tinker around to check if its possible but couldnt get it done. Now that i have seen the w https://kodi.software/ ay you did it, thanks guys
with
regards

Yes in fact such fiction it makes you think and rethink a lot of things that you used to turn a blind eye to. Because it's really hard for many people to immediately understand and accept as well. I already know for myself. For example the topic of slavery, it just shocked me, I did not even know that such a thing exists in today and how it used to be. You can read the essay by the way go to this site , to learn more. I, for example, did not know and have now had a real epiphany. I hope I helped.