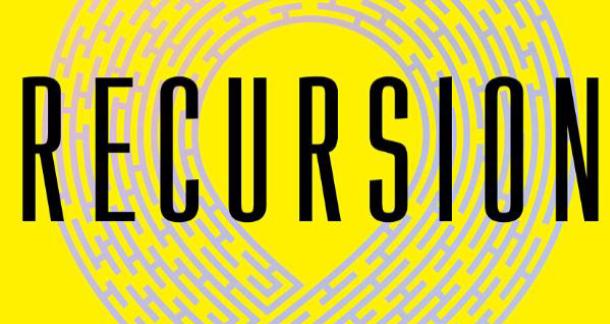 Blake Crouch seems to have mastered the art of blending complex science fiction, mystery, human drama, and psychological horror with his latest novel Recursion, available now from Penguin Random House. Author of fourteen books to date, including the Wayward Pines trilogy, which became the basis for the Fox television series of the same name, Crouch first came to my attention with his 2016 novel Dark Matter (read the LitReactor review here). I loved this novel, but Crouch has outdone himself with Recursion.

The narrative splits its time between Barry Sutton, an alcoholic New York City detective still reeling from the death of his teenage daughter a decade prior, and Helena Smith, a scientific genius obsessed with constructing a device that can essentially record memories—a DVR for the mind—in the hopes of preserving what is left of her dementia-stricken mother's brain. She's ultimately approached by a shadowy entity offering a too-good-to-be-true deal: unlimited funding for Helena's invention, if she agrees to cloister herself on an offshore oil rig-turned research lab. Meanwhile, Barry grapples with the effects of a newly-arisen and woefully misunderstood disease called False Memory Syndrome, which causes people to suddenly remember entire lifetimes they never actually lived, like something from a dream, but recalled as vividly as reality.

Casual readers will no doubt figure out the two narratives are connected in some way, but just how they're connected will surprise even seasoned fans of genre fiction. And that's exactly where Crouch shows his true stripes as a storyteller, especially in the context of the mystery/thriller: he keeps you on your toes, and he's one hundred percent willing to pull the rug out from under your feet. Moreover, Crouch's prose remains perfectly situated between florid and perfunctory, and this combined with his use of present tense gives the plot a sense of immediacy that is easy to clip through—a slow reader such as myself still managed to read the novel in a little over a week.

Crouch is also adept at delivering intricate, sometimes sprawling philosophical theories of time, memory, the nature of reality, and human mortality without slowing the story down. Likewise, there's enough technical jargon to ground the fantastical and ostensibly impossible events in the novel without ever reading like an academic essay (a medium with its own merits, but not something you want in a piece of speculative fiction). It's release coincides with summer, so you can treat Recursion as a beach read, if you're so inclined—fast-paced thrillers and other "light" reads being the preferred texts for sand-lounging—but it will be one of the headiest beach reads you'll ever tackle. And also one of the most horrifying: without revealing too much of the novel's events (it's best not to know much about it before diving in), there are nightmarish scenes of apocalyptic terror that match anything you'll read in a Stephen King book, or see in HBO's Chernobyl.

At the end of the day, however, for all its mind-bending action and horror, Recursion is a love story, as much Somewhere in Time as it is Slaughterhouse Five and 12 Monkeys. This contributes to the novel's sense of timelessness—fitting, given its focus on time and memory, and also impressive, given that it's also timely, as it deals with present day issues of morality without tackling them head-on. Overall, Recursion is a familiar story, told in an original fashion and in Crouch's distinct voice, and this writer cannot recommend it enough.