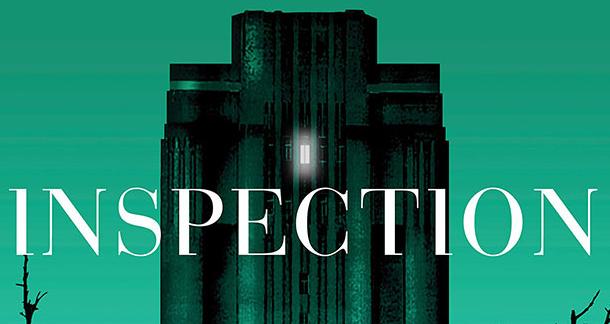 The release of the Netflix original adaptation of Bird Box sealed Josh Malerman's status as a major horror author. And that much he is, a writer with a seemingly innate knack for playing into humankind's universal fear of the unknown, including the dark mysteries residing within our own hearts and minds. This talent is on full display in Malerman's latest novel, Inspection, out now via Del Rey Books.

The premise of this book is this: a pompous married couple, Richard and Marilyn, set up a human experiment deep within the woods of Michigan. They believe that preoccupation with procreation and sexual pursuits are humanity's biggest distractions, and that, if boys and girls grew up without any knowledge of one another, they would undoubtedly become the greatest thinkers and inventors the world has ever seen. Thus, they set up camp in two old towers, hidden away from society and mere miles apart from each other. Calling these buildings the Turrets, Richard and Marilyn set about raising 26 boys and 26 girls, respectively, naming them only after letters of the alphabet—known, collectively, as the Alphabet Boys and the Letter Girls. A team of ex-cons and desperate teachers help keep the Turrets running, while Richard and Marilyn, known as D.A.D. and M.O.M. or, broadly, the Parenthood to their "children," preside over their buildings with increasing megalomania.

Malerman seems to be skewering the dusty ideas plaguing society (or that have long-plagued society), namely the typical, predetermined roles the sexes must play...

For years, the plan seems to go off without much of a hitch, though two Alphabet Boys and one Letter Girl have been sent to "the Corner," a mysterious punishment area the children dread more than anything in their lives. The novel's action proper begins at the onset of the "delicate years" (puberty), a time the onsite psychologist Dr. Burt (of whom the children are not aware) insists will lead to significant changes within the Turrets. And she's absolutely right, though not so much because the boys and girls transition into young adulthood, but rather because of oversights on the part of the Parenthood. For the Alphabet Boys, the catalyst for the experiment's compromise comes in the form of a novel called Needs, written by jaded author Warren Bratt, employed by the Parenthood to pen propaganda leisure novels for the boys. In this opus, Bratt reveals the existence of women. For the Letter Girls, it all starts when K, who possesses a photographic memory and an unbreakable thirst for knowledge, accidentally spies the top of the boys' Turret from high atop her own tower. The lies and deception eventually come to light, and it's pretty horrifying, both psychologically and on a gut level.

There's much to love about Inspection. Malerman's sparse yet evocative prose helps move the narrative along, which is good since, in other hands, the same idea could have ended up being quite bloated. Characters both good and evil are completely fleshed out, with the latter especially believing themselves to be the heroes of the story, convinced their deplorable deeds are just. Malerman handles the point-of-views of his adolescent characters adeptly, capturing the heartache, confusion, longing, and ever-shifting quality of self-esteem that comes with the onset of puberty, especially as it applies to these extraordinary pre-teens, who live strange and extremely sheltered lives. Much of the novel relies on atmosphere and mystery, for "quiet" horror fans, but for those who appreciate some Grand Guignol levels of violence, Malerman has you covered there too.

And yet, there's a pretty big oversight that mars Inspection, not detrimentally, but enough that it's well worth discussing. It seems logical that Richard and Marilyn wouldn't consider the sexuality of their children, given they have other conservative and outdated views on human interaction. They may very well believe queerness to be a choice, rather than something genetic. The inevitability that at least a few of the Alphabet Boys and Letter Girls would be gay and thus "distracted" from their studies, given their attraction to members of the same sex, should have been the catalyst that destroyed the Parenthood's experiment, but it isn't. The two main kids in the narrative, the boy J and the girl K, are straight, and if any of the other children are queer, the matter isn't discussed.

One may argue that, because the children are only at the cusp of puberty, they're not yet thinking about anything remotely sexual, and thus the question of sexuality remains a non-issue, but the truth is, kids as young as three years-old begin to "explore" their bodies and become curious about the bodies of others their own age, long before they really understand the concept of procreation or even of sexual experiences. And if sexuality is indeed a spectrum, even those boys and girls who aren't primarily gay or lesbian might still find themselves experimenting with members of the same sex, simply because those biological "needs" that Warren Bratt writes about need to be met. Even without understanding the concept of human procreation (the boys and girls believe children grow on trees), the even more basic desire for pleasure and gratification would have certainly come into play within the walls of the Turrets long before the "delicate years" and the beginning of the novel's narrative, and would have thus crumbled Richard and Marilyn's ill-conceived plan before Warren Bratt's tell-all and K's enduring curiosity.

And yes, there's a good amount of disbelief-suspending that goes along with reading any horror/fantasy/sci-fi novel. That's certainly the case with Inspection, given the relative improbability of its main scenario coming to fruition in the first place. But as is often the case with speculative literature, the overall story is meant to be a parable, and whether or not its premise is entirely plausible isn't that important when compared to the overall message the author wishes to convey. This is also the case with Inspection, as Malerman seems to be skewering the dusty ideas plaguing society (or that have long-plagued society), namely the typical, predetermined roles the sexes must play, the idea that boys naturally only see girls as objects of sexual conquest, and that separating the sexes is ultimately better for all parties involved (something we do in reality via boys-only and girls-only schools, though these students are at least aware of the others' existence). But even in this microcosm of society, ignoring the reality of queerness entirely just feels like a grossly missed opportunity to take the themes already present in the novel even further. It's a missing piece of the puzzle, an overlooked aspect that would have enriched, rather than weighted, an already intriguing idea.

But Inspection is still a worthy read, one that, despite its flaws, upholds Malerman's premiere horror author status. All that is good about it, stated above, remains intact, even if it's not entirely a knockout.