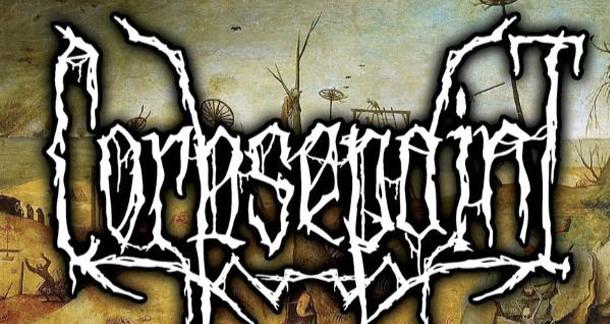 Metal and horror have a longstanding, healthy relationship. Both explore dark themes of death, destruction, and the macabre, and sport diehard fanbases composed of society's misunderstood, moody misfits. (That there is a kind of proto-metal horror punk band by the same name is more a coincidence than anything, but it is no less fitting). Given this, it is no wonder that the fanbases tend to overlap, providing fertile ground for many writers, most recently including Joe Hill and his novel Heart-Shaped Box, as well as Jason Lei and Sarah Howden's comedy horror film Deathgasm, among numerous other titles.

Author David Peak's latest novel, Corpsepaint, (out now from Word Horde) explores this same territory, but it does so in tones as black and gritty as the music itself. The title refers to the high contrast black and white face paint used by metal bands to appear corpse-like or even demonic. The specter of this masking combined with the novel's primary setting—a snow-covered compound in the Ukraine—works as a symbolic covering of the deep darkness coursing through the narrative, the blackest evil hiding beneath a bright white facade. This dichotomy may also allude to the book's Lovecraftian themes and issues of racism that go hand in hand with the man's name, but more on this in a moment.

"Corpsepaint"  is a meditative and psychologically-driven book, unfolding at the speed of a thirty-minute ambient doom track rather than a fast and heavy Bathory song.

The novel centers on Max, AKA Strigoi, a washed-up, heroin-addicted musician and founder of seminal metal band Angelus Mortis, who never quite topped the success of their first three albums. Max is notoriously difficult to work with, resulting in a revolving door of musicians for each Angelus Mortis album. His latest recruit, Roland—a dumb and doughy kid with a near-genius-level gift for songwriting and drumming—accompanies Max from America to the remote compound of European metal band Wisdom of Silenus, who basically operate a doomsday cult, though members are free to come and go as they please, despite the consternation of their leader Seph, the lone female member of the band. Their record label arranged this "legendary collision of two worlds" as a potential comeback for Max and possibly a recruitment technique for Wisdom—or at least, that's how Seph sees it. However, true to good horror fiction plotting, things do not go according to plan, and the music created by the musicians in this icy locale threatens to annihilate the world, and possibly even the universe.

To explain any more of the plot would ruin the reader's experience. However, a caution is in order: if, based on the above description, you are expecting an action-packed novel, you will be disappointed. This is not a strike against Peak's work, to be clear, but rather an advisement to simply check your expectations at the door when cracking its spine. Despite visions of nightmarish, sometimes gory imagery, Corpsepaint is a meditative and psychologically-driven book, unfolding at the speed of a thirty-minute ambient doom track rather than a fast and heavy Bathory song (one of the real bands mentioned in the novel). We spend a significant amount of time with the thoughts of the aforementioned three main characters (as well as the compound's resident witch Taras, and even, at one point, a young goat). Where Max and Roland are concerned, their main preoccupations are steeped in constant contradictions, with Max primarily alternating between respect for his earlier work with Angelus Mortis, expressing a desire to "get back to his roots," so to speak, and loathing those first three albums for overshadowing every subsequent release. Similarly, Roland cannot decide if all people should strive toward isolation, or if loneliness is crippling and detrimental to one's health, among other opposing sentiments. It's love and hate in equal measure for these two, with neither character really knowing how they feel or what they really want, despite how bull-like they charge through their lives, how headstrong and cocksure they behave, how much they insist they have things figured out. (And naturally, the ultimate conclusion Peak reaches is that Max and Roland, two very different but identically naive Americans, really know nothing.)

Seph shares some of Roland's feelings of isolation, as well as a sense of being lost, of wondering what her "Lord" desires of her, and how—as a mere mortal—to meet those expectations, but despite this she is the most resolved and put-together of the trio. Unfortunately, her core beliefs involve unabashed racism toward "dark-skinned immigrants" and extreme, militant nationalism. It seems fitting then that Peak ultimately emphasizes the violent destructiveness of Seph's way of thinking as more terrifying than the cosmic horror elements of Corpsepaint—a sobering statement that, despite the supernatural forces at play, people are the most grotesque and dangerous monsters on the planet, the true darkness hiding in the light. As such, anyone seeking a life-affirming read should look elsewhere; this novel actualizes in uncompromising detail the "anti-human, anti-life" themes of the music with which it is concerned, and it thus exists as a very good example on downbeat, bordering-on-nihilistic horror, a treat for anyone who prefers their fiction black and bitter.