Bookshots: 'When We Were Animals' by Joshua Gaylord 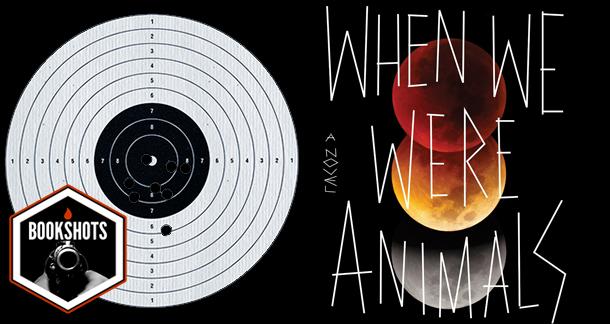 When We Were Animals

Joshua Gaylord, author of four novels, two of which he published under the pen name Alden Bell. He's also a professor at NYU. More info at his website.

Once immersed in the palatial, fleshed-out, living, breathing (and sometimes seething) world of 'When We Were Animals', you won't want to leave it.

In the town of Pale Miranda, during the three nights of the full moon, young children and adults stay locked behind doors after sundown, while the teenage population strips naked and runs wild.

Lumen Fowler, who also serves as the novel's first-person narrator. Underdeveloped physically but far smarter than her peers, she believes she will not "breach" with the other teenagers, watching this rite of passage from a safe, intellectual distance.

Alicia Vikander, who plays the android in Ex Machina.

That's a tough one. Aside from the obvious, Pale Miranda—a small and mostly isolated town with a unique and entrenched rite of passage similar to the Amish's Rumspringa—isn't much different from any small town in America. The people there seem to genuinely value arts and education, and they accept the animalistic abandon of youth as a natural occurrence. Sure, bad things happen, but don't bad things happen everywhere?

Problem is, there's a sense that you can only live in Pale Miranda if you were born there, and that it's difficult to fully separate yourself from the town if you leave. So perhaps not.

On certain days in the spring, in late April, say, it is possible to believe what the animals believe—that horror and beauty are hearty allies, and that when you live in the full roiling of your guts it's impossible to make distinctions between them.

Some novels gain your intrigue through a slick cover jacket design and a hook-laden blurb that tells you about the protagonist and gives away some of the plot. Other novels lure you in with a simple premise, perhaps delivered to potential readers within the parameters of a few words.

When We Were Animals is the latter type of book. You're better off knowing as little as possible before diving right into its pages. Joshua Gaylord's fourth effort casts glamours with every plot turn and character reveal, every poignant sentence and magnificent paragraph. There isn't a misstep to be found here, no out-of-place or contrived moments, from the novel's bewitching opening to its pitch-perfect, question-mark conclusion. Gaylord bends and blends genres here, giving us a book simultaneously shelf-able as YA, horror, dark fantasy, or general lit-fic; moreover, the author explores the slippery nature of identity and self-esteem, teenage angst and loneliness (especially when viewed through the lens of maturity), sexual awakening, sexism, human domestication, the American class system, and our long-standing culture of fear. These elements combined create a novel both topical and universal in its thematic concerns, and ensures a broad and diverse audience, both present and future. It's cliché to say it, but there's literally something for everyone here.

Another cliché that happens to be true: once immersed in the palatial, fleshed-out, living, breathing (and sometimes seething) world of When We Were Animals, you won't want to leave it.