Review by Christopher Shultz November 9, 2015
In: 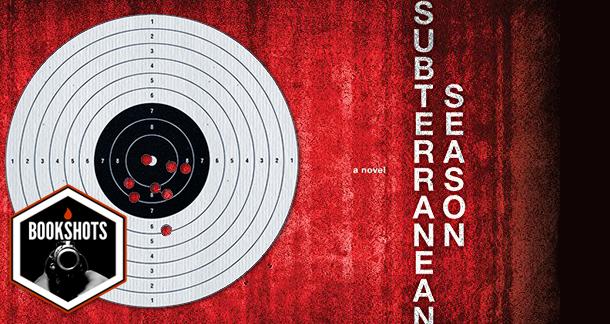 If you perhaps see a bit of yourself in Alex, take a step back and find your footing, else you might find yourself plummeting into darkness with no means of salvation.

Dale Bailey, author of three previous novels and numerous short works, including pieces in Nightmare Magazine and Tor.com. His novelette "Death and Suffrage" was loosely adapted by Joe Dante for Showtime's Masters of Horror series. More info at his homepage.

On the same day Ph.d. student Alex learns he's failed his final exams, he is forced to move his offices into the labyrinthine underbelly of the school's football stadium. There, he discovers a secret room behind his bookshelf, and a hole concealed therein that seems to have no bottom...

(To say more would truly ruin the reading experience, and so I advise you not to read the blurb on Amazon—it basically gives the entire plot away).

Just about anything by Stephen King, but in particular Christine. Joe Hill also comes to mind, as well as Richard Matheson.

Alex, almost thirty, addicted to pot, skirting into alcoholic territory, lazy, apathetic, with no future prospects to speak of (and he seems indifferent about the ones he does have)—in short, very much the archetypical fuck up.

The parties on frat row had shut down—or had been shut down—by this point, and Alex moved through the silence accompanied only by the quiet rhythm of his own footsteps and the distant susurrus of a passing car. Pools of shadow enveloped him between the bright islands of light cast down by the streetlamps, and a light breeze set the autumnal leaves of the overhanging trees whispering among themselves.

Writing about the author's short story collection The End of the End of Everything, fellow writer and friend Nathan Ballingrud states:

Dale Bailey has been one of the best kept secrets of the fantasy genre for too many years. A true child of Bradbury, using language as pristine and as robust as his imagination, he writes beautiful, heartbreaking stories for our dark age...

This statement rings especially true for The Subterranean Season, a novel featuring both lush and entrancing prose and a relatable, almost-everyday Joe protagonist (hence the above comparisons to Stephen King and Joe Hill). The problem with this dichotomy in Bailey's work, however, is that Alex's darker impulses can hit just as close to home as his admirable qualities. His sense of aimlessness while simultaneously working toward a goal (nabbing a teaching job at a respectable university), his intoxicated plodding along toward said goal with the burden of second-guessing on his shoulders, a notion that perhaps he doesn't actually want the thing he's always wanted—these are impasses with which anyone can identify.

At the same time, Alex's typical maleness (with attached bursts of sexism), his apathy and his penchant for laying blame for his fuck-ups just about everywhere and on just about anyone but himself, while unattractive, may also pluck a few chords with the average reader, and this I think is cause for concern. Because The Subterranean Season is a novel about the making of a sociopath that weighs the influences of nurture and nature, ultimately proclaiming that just about anyone could tumble down a dark, cavernous pitfall—all they need is a little push. So if you perhaps see a bit of yourself in Alex, take a step back and find your footing, else you might find yourself plummeting into darkness with no means of salvation.

It must also be noted that this novel features commentary on the rather shoddy state of America's higher learning institutions and the exploitation of student athletes, making Bailey's work not only timeless (given the classic narrative of good versus evil), but also relevant to present-day woes. Personally speaking, the author is right on the money with this issue, so my recommendation of The Subterranean Season is only enhanced further by its appearance. Go forth and read it now.