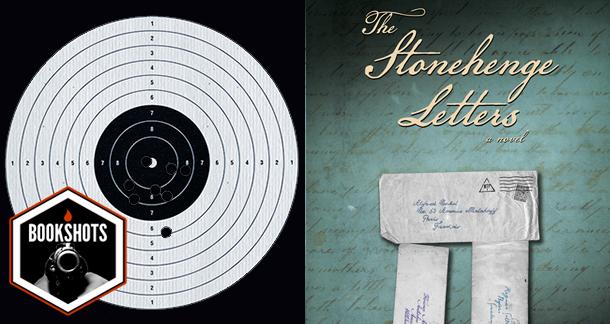 'The Stonehenge Letters' is a fantastic book, and well done to the publisher for taking a chance on such a weird hybrid work.

Harry Karlinsky, fictional historian and author of The Evolution of Inanimate Objects: The Life and Collected Works of Thomas Darwin (1857-1879).

While searching through the Nobel Foundation's archives for evidence as to why the great psychoanalyst Sigmund Freud never received a Nobel Prize, our intrepid narrator, "a (now retired) psychiatrist and amateur historian," discovers a thrilling secret! Alfred Nobel had intended that there be an extra prize, in addition to those in Literature, Physics, Chemistry, Physiology or Medicine, and Peace, "awarded to the outstanding man or woman amongst these prizewinners who can solve the mystery of Stonehenge." Uh, sure.

Un-Henged: The True Fake Account of One Man's Secret Mission to Learn Other Secrets About a Guy Who Himself Wants to Learn Secrets Even Though He's Dead: A Work of Creative Non-nonfiction: Maybe: The Untold Story: Because It's Fake: I Think

Alfred Nobel, an unlucky-in-love millionaire inventor who just wants someone to talk Romantic poetry with; Ms. Florence Antrobus, a married (gasp!) woman and amateur Stonehenge expert; Ragnar Sohlman, executor of both of Alfred Nobel's wills: the official one and the, uh, secret fictional one.

Swedes, so maybe some Skarsgårds and some Garbos and some Ann-Margrets. Oh, and Florence is British, so Emma Watson or whoever. It really doesn't matter.

The bulk of this _____ (novel? nonfictive embellishment? posthumography?) takes place in Europe between the 1880s and the 1910s, so thanks but no thanks.

Unknown to Curie (and initially to this author, see Appendix II), her submission for the Stonehenge Prize, like virtually every other document written in her contaminated laboratory, was covered with radioactive dust.

Although this takes a close second:

Though Einstein was fond of Curie, he once wrote that she "has the soul of a herring."

Poor Marie Curie had it rough.

First, an explanation: I knew going into this that I was reading a novel, but I had NO CLUE for the duration of the read what was real and what was made up. All of the "characters" in this book are real people, and many of the events discussed are real, but the basic premise—that Alfred Nobel wanted there to be a secret "Stonehenge Prize"—is made up. Which is incredible. This book reads like any other creative nonfiction work, with footnotes and appendices and scholarly research, except it's all fake. Not just fake, though: just fake enough that you can never tell reality from fantasy. There are chapters on each of the Nobel laureates who entered a submission for the Stonehenge Prize (Marie Curie, Ivan Pavlov, Rudyard Kipling, and Teddy Roosevelt), and the author ties each into this secret history in completely plausible ways.

This might sound really lame, but there's a certain thrill that comes from actively not knowing what's real and what's fake in a "novel." The people are real; their birth dates and death dates and major accomplishments and various relations are real. The locations are real. The photographs are real, as are the scientific theories and historical anecdotes and diagrams and figures and illustrations. Everything is taken from the real world, but it all exists in this fictive space, an elaborate concoction designed to make the reader believe that maybe Alfred Nobel really did set up some secret prize. It's incredible.

That being said, if you don't enjoy creative nonfiction, then you're obviously not going to magically love a novel that reads like creative nonfiction. It's funny (the footnotes especially) and extremely intelligent, but it reads like some kind of bizarre research paper, and some people just aren't into that kind of thing. I didn't think that I was into that kind of thing, but it was really enjoyable. I loved it. The Stonehenge Letters is a fantastic book, and well done to the publisher for taking a chance on such a weird hybrid work. Speaking of, the publisher is actually Coach House Books, the same publisher of that poetry collection I loved so much earlier this month. I'm absolutely going to pick up Harry Karlinsky's other book, and I'm going to check out as much as I can from Coach House now.

What kind of a person are you Brian?

A person who enjoys modern indoor plumbing, a populace of frequent bathers, and a world in which Emma Watson has been born and exists.