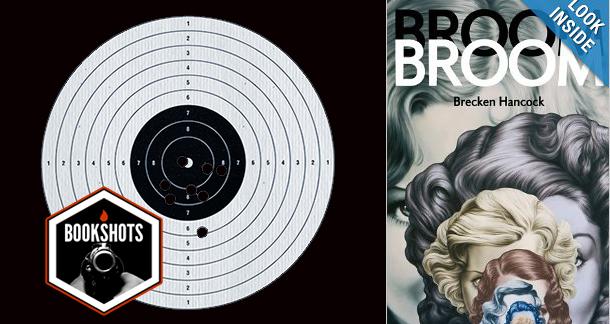 Hancock's ability to introduce seemingly absurd themes and hold the reader's attention via bizarre imagery through to interesting conclusions is incredible.

How do you feel about bathtubs?

You know, this collection actually covers a broad spectrum of themes, topics, tones, rhythms, and forms, so it's hard to pin down a specific poetic style or author to compare it to. Normally I'd be turned off by this level of freneticism, but Brecken Hancock juggles her various personalities quite well. No matter what you're into poetically, there's probably something in here for you.

If I ever meet Ms. Hancock, I'll be sure to ask her who she'd want to play her in the biopic.

I pretty much already do live in a surreal poetic wonderland, so sure. I almost certainly would avoid the bathtubs, though.

I was genuinely surprised by how much I enjoyed Broom Broom. At no point does it feel repetitive or like it's getting into too comfortable of a rhythm. Every poem took a positive departure from the one before it. Hancock tackles subjects mercilessly, and I never had any clue what roads a given poem might venture down. Most of the poems are fairly short—there are a few haiku, and many of the rest are only a page or two—but she's not afraid to drop a ten-page bomb in the reader's lap every so often. The best of these longer ones (and I usually HATE long poems, but I loved this) is "The Art of Plumbing," which goes into extensive detail on the ridiculous history of indoor plumbing, from lavatories in Ancient Egyptian tombs to Erzsébet Báthory bathing in virgins' blood to 21st-century murders via broken faucets and fixtures. It's a hilariously grotesque compendium of historical thought on an oft-overlooked aspect of everyday life.

Unsurprisingly, though, it was the shorter poems that really did it for me. Hancock's ability to introduce seemingly absurd themes and hold the reader's attention via bizarre imagery through to interesting conclusions is incredible. One of my favorites, "Husha," appears near the beginning of the book:

Carson says fetal sharks scarf
each other to abortion. Yum yum
in Mom's womb. It's on YouTube.

Tucky whispers, Your cousin fucked
a bunny. But I can't imagine
enough room in her tummy.

"Husha" shows up in the midst of a grip of other highly musical poems, but just when I thought I had Brecken Hancock figured out, her poem's progressed beyond this obsession with sound to explore other styles. By the time she gets to "Incus, Malleus, Stapes" midway through the book, there's only a hint of that sugary lyricism left, as if she's moving herself out of childish thoughts and habits along with the characters that she's writing about:

Preteens imagine being seen
naked someday, and present to the mirror.

There were a handful of poems I didn't fully connect with, but for the most part Broom Broom is a solid collection of really interesting poems. Brecken Hancock isn't afraid of any subject, apparently, with family history, her body, personal demons, and random taboo topics all fair game as far as she's concerned. This is her first full collection, and I highly recommend getting in on the ground floor with her career, because it seems like anything she writes about is going to be beautifully unique.