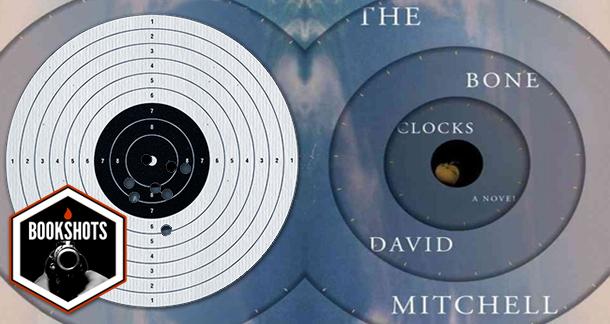 There is so much here to entertain and inspire, so much in Mitchell's storytelling to marvel at.

Young Holly Sykes hears other people's voices in her head. At fifteen years old, she runs away from home. Her brother goes missing a few days later. She spends the rest of her life trying to make sense of his disappearance, even when it involves warring psychic factions.

A few different actresses, if you want to avoid an embarrassing makeup debacle a la the Wachowski's Cloud Atlas adaptation. The same actress could handle the middle sections, but you'd definitely want a teen and an older woman for the beginning and the end. Hailee Steinfeld for the kid, if you grab her up quick, and Dame Judi Dench for the grandmother. And how about Jennifer Lawrence for the middle Hollys? C'mon, America! You know you still lover her! Plus, she is a damn fine actress.

So many settings... But Iceland and pre-dystopian Ireland sound gorgeous. And a month from now, I will have been to one of them!

There are moments when this novel gets a little silly. Even in the hands of a writer as talented as Mitchell, a psychic battle is a pretty preposterous thing. All frantic gestures and floating bodies. Still, if you can get past that, there is so much here to entertain and inspire, so much in Mitchell's storytelling to marvel at. It helps that the really fantastical stuff doesn't happen until well past the halfway point. By then you are so absorbed in the characters and their connections, you take it in stride. There's no way in hell a little Harry Potter action is gonna stop you from finishing this book.

Especially if you're a Mitchell fan. The Bone Clocks shares a number of similarities with Cloud Atlas, his most popular novel. Both books contain a sextet of interconnected stories that deal with souls being shared between bodies (although the connections in Cloud Atlas are much more subtle). Also, the stylistic differences between the sections in Clocks are not as pronounced. Except for the final section, most of them take place in a world we recognize as our own, with writing that could be described as "contemporary."

So in that respect, The Bone Clocks is like a more accessible version of Cloud Atlas. But calling it that would be doing it a disservice. Being more accessible does not make it a lesser novel. It is, quite simply, a joy to read. Each section builds upon the last, while still presenting the reader with exciting new characters and scenarios. Mitchell transcends time and place, feeling equally at home in 19th Century Australia as he does in Ireland in the 80s. It's like he's been to all these places, lived lives within lives.

Despite this, this is not a patchwork novel. It is a cohesive whole. One that will have you racing ahead to see what happens next, but also flipping back to reread as you discover new connections. In that way, the reading almost becomes a non-linear experience. Fluid, like the lives of the Horologists. Still, it never loses its momentum. This is a story about the future as much as anything else. Not just the future of the characters, but the future of the environment, society, and of all mankind.

Let me know how pre-dystopian Ireland is.

I think we need a podcast to discuss this on....

Sink a Guinness for me Mr Chaplinsky.