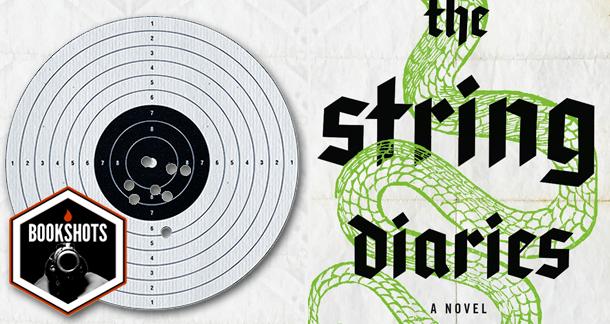 Media agency director and first time novelist, Stephen Lloyd Jones (not to be confused with Stephen Graham Jones, who has written more novels than God).

A shape-shifting killer chases love across the ages, the current iteration of which is a young girl (weird) named Leah.

The Book of Jakab, which I believe is its moniker in some foreign markets. Much more appropriate, considering a dude named Jakab features heavily in the story, and string does not.

Mainstream page-turners, Dan Brown (and I do not mean that in the pejorative sense. This is better than Brown.)

Hannah, mother of Leah, the underage objet d'obsession of Jakab, an ageless lunatic who's to blame for giving the shape-shifting Hosszu Eletek a bad name.

I'm gonna go with Jessica Chastain as the instinctively protective Hannah and, oh, I don't know... someone appropriately European like Mads Mikkelsen, who has the right combination of menace and good looks, for Jakab. Do we really care who plays the kid?

If I wasn't being hunted by a deranged kind-of-human, then yes. The String Diaries features many beautiful locales, from the English countryside to Hungary to France.

Mystery? Thriller? Horror novel? In the Venn diagram of genre, The String Diaries rests squarely at the intersection of all three. It's a beach read, an airport novel, a page-turner—none of which is meant as an insult. If you like a fast-paced story full of intrigue and cliff-hanger chapters, this is the book for you. Or one of them, at least.

What stands out most about The String Diaries is its mythology. It centers around the Hosszu Eletek, a group of Hungarians blessed with "long life" and the ability to change their appearance. A cursory internet probe reveals them to be entirely fictional, a fabrication of the author. Still, it's a well-crafted piece of folklore, one that could pass as real. (A real piece of folklore, that is. I'm not implying these people could exist.) I almost wish I hadn't let Google shatter the illusion.

The mythology is broken up with the requisite amount of action, much of which is pretty standard fare. I have to say, it was the characters and their predicament that kept me reading, not the car chases and gunplay. There were also some secondary baddies introduced late in the game, in what seemed like an effort to increase the body count. Still, the final showdown is sufficiently satisfying, although it does contain an element of "cake and eat it too."

Speaking of which, I like to include at least one piece of shameless quote-bait in each review, so I'll leave you with this saccharine simile:

Like a good cake, The String Diaries will leave many readers Hungary for more.

(Mulholland, feel free to blurb me on that.)

How many novels has God written?

(apart from The DaVinci Code obvs)

Joshua Chaplinsky from New York is reading a lot more during the quarantine July 8, 2014 - 6:47am

He uses a pen name a lot.