Bookshots: 'That Thing You Do With Your Mouth' by Samantha Matthews and David Shields 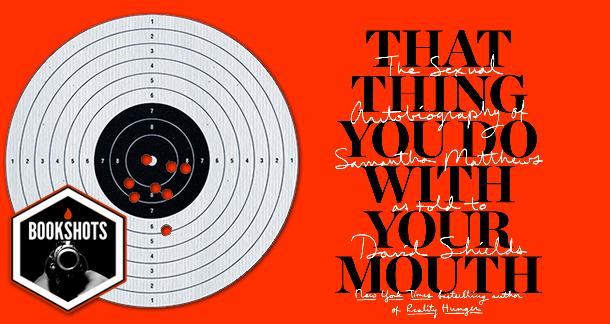 That Thing You Do With Your Mouth: The Sexual Autobiography of Samantha Matthews as Told to David Shields

'Mouth' shouldn't work, but it does. Not only does it work, it excels.

A series of phone conversations and emails with Matthews, compiled and presented by Shields (who is apparently a distant relative of the actress), exploring sexuality, gender norms, beauty standards, and the echoes of childhood trauma and abuse.

Shields's title warrants no meddling on my part, because "that thing" actually has nothing to do with sex, per se: it's simply talking, and it's presented with both negative and positive connotations (mostly the latter).

I can't say I've ever read anything like this, save for maybe Eve Ensler's The Vagina Monologues. Movie-wise, I would say the Indie Sex series of documentaries and Lars Von Trier's Nymphomaniac.

Samantha Matthews, which again, is not her real name. She is a woman simultaneously sexually-liberated and repressed, both due to past experiences and the expectations of her gender.

I'm not certain ...Mouth would make a good film. Maybe a documentary, but even that's a stretch, given the book's non-linear narrative approach, reading more like undated, time-jumping journal entries rather than an A to Z story.

Perhaps the best motion picture experience of the text has already been achieved with this book trailer:

Matthews's story travels around the United States and eventually settles in Barcelona. I'd take New York and the final destination, so long as the rent is cheap.

To get at the crux of Matthews's style and her psychology, a full passage is needed here:

The look in the eyes when a person comes is that place between life and death. A long, momentary surrender to a soul-trapping ghost—taking the person away, sucking them into a pleasure vacuum, echoing crows cawing. In Spanish they say, Me voy, me voy. 'I'm going, I'm going.' Which seems more accurate than 'I'm coming, I'm coming.' No you're not. You're leaving. Leaving together. Being able to make someone go to that place of surrender feels powerful to me. I feel bad for thinking that.

For all intents and purposes ...Mouth shouldn't work, but it does. Not only does it work, it excels. This dreamy, almost scatterbrained narrative approach feels like the best and only way to tell Matthews's story, especially if you imagine the book told in a more linear and cohesive fashion. Reading ...Mouth, you feel as though you're having an introductory conversation with the narrator, perhaps a "getting-to-know-you" session, maybe after a few glasses of wine, a few shots, a few hits off a pipe or a joint. The details are disjointed, yes, but once the evening is through, you have a sense of who this person is and how she operates, namely that she's torn between embracing her sexual life and scrubbing it off her like grimy sweat after the gym (the above quote from Matthews touches upon this love/hate relationship with her own desires, a theme that recurs throughout the narrative). It is clear that the abuse Matthews suffered as a child will forever follow her and attempt to destroy any enjoyment she might find; but the point is, she keeps enjoying herself as much as she can anyway.

...Mouth, ultimately, feels important. It's a one of kind book that offers direct insight into an issue with which far too many women struggle, even those without any histories of sexual abuse. The key here is that while ...Mouth may feel like a conversation between reader and narrator, in truth, it is only the narrator talking to the reader. You cannot interject. You can only listen. And sometimes, simply listening is the most important thing you can do.