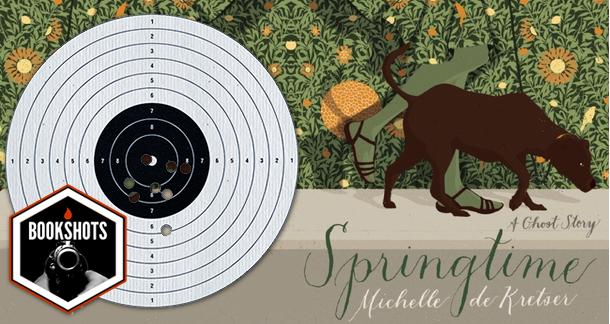 Whether or not the spirits are real or imagined doesn't matter; what's most important is the effect they have on the protagonist.

Michelle de Kretser, author of four previous novels, including Questions of Travel, which won the Miles Franklin Award, and The Lost Dog, which was longlisted for the Man Booker Prize.

Frances, a young student uprooted from her home in Melbourne and transplanted to Sydney, Australia begins to see a strange woman with a bull terrier standing in a garden during her long walks around the city. But there's something...off about this woman, and Frances begins to suspect she might be a ghost.

Gothic or quiet horror / uncanny tales in general, especially Henry James's The Turn of the Screw and the works of Elizabeth Bowen

Frances, a 28 year-old grad student writing a thesis on "objects in eighteenth-century French portraits," particularly flora. She has her own dog, Rod, and she is married to an older man, Charlie, who left his wife and son to be with Frances in Sydney.

I'd give Sydney a whirl.

In Sydney the streets ran everywhere like something spilled.

There is much to love about this book, which is not a novel, but rather a short story—at its longest, possibly a novelette. This alone is an intriguing concept—shorter works that might typically only appear in a magazine, anthology or as a standalone Kindle single perhaps, appearing in print, with artwork filling out full pages here and there throughout the book. I have to give respect to publisher Catapult for trying something different.

Furthermore, de Kretser's prose is as lush and evocative as the plantlife surrounding and intoxicating her protagonist. Through Frances's perspective, we experience a world not so much spinning out of control as gradually sliding away, like paint running off a flat surface tilted askance. We see Frances's disenchantment with Charlie as the gap in their ages (he is considerably older) fully dawns on her, and how this disparity yields certain expectations concerning Charlie's son Luke, as when her husband throws out his back, confining him to the bed, placing Frances in the unwanted position of a caretaker. In addition to the pre-existing "fish out of water" atmosphere and this aspect of motherhood, Frances keeps getting strange phone calls whereby there is nothing but static on the other end, followed by a decidedly robotic voice saying "Goodbye." So it is no wonder she begins to see things in the neighboring garden, that she becomes plagued not so much by a spirit, but by the suspicion there may be no spirit there at all—in other words, a descent into paranoia and uncertainty that, without giving too much of the ending away, seems to end with Frances repeating some of her same mistakes as before.

There is one aspect of this ending, however, that doesn't seem to fit with the mood of Springtime overall. I won't reveal this aspect in detail, though I will say that it almost comes off as the punchline to a "shaggy dog" story (pun intended—the ending involves a canine). It's a twist ending of sorts, and it feels out of place, tacked on to somehow validate the subtitle of the book, when in fact no validation is needed. That's the nature of a haunting: whether or not the spirits are real or imagined doesn't matter; what's most important is the effect they have on the protagonist, be it the beating of that hideous heart or the terrifying visage of Peter Quint in the window.