Review by Christopher Shultz December 1, 2015
In: 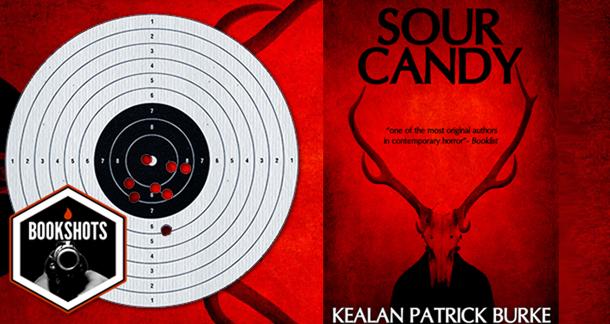 Serves as a solid starting place for Burke's sprawling body of work.

A man's simple life becomes a nightmare when he's suddenly and inexplicably saddled with a small boy, who may or may not actually be a child at all.

The works of H.P. Lovecraft or other authors writing in the cosmic horror sub-genre.

Phil, an average guy really. He's got a great job with a bank, a wonderful girlfriend, and an overall great, simple life.

Richard Armitage, why not?

I already live in a mid-sized city, though I don't typically frequent Walmart.

'Yours now,' the woman said, though her split lip made it Yoursh now, her voice the sound of a rake through dead leaves, each word forcing the rent in her chin to widen like some strange vertical second mouth.

Sour Candy is a novel bursting at the seams of its ill-fitting novella attire. By this I mean that there are grand ideas at play here, but the constraints of the medium work against their total fruition. The core premise—a person taking charge of a child he never wanted, and having to unwillingly give up aspects of his personal life—is a real-world relatable circumstance that offers a breadth of intriguing narrative paths, particularly when considering the child is a supernatural being, possibly even a malicious one. I feel Burke itching to explore these scenarios to their full extent, but because of the shorter novella format, he doesn't have the space to do so. Events transpire too quickly, especially after the mysterious boy has situated himself in Phil's home, with the specifics of the protagonist's emotional landscape being told rather than shown to the reader. We soon begin to observe Phil's physical and mental deterioration—the result of his inability to escape this waking nightmare—as a series of quick slide images rather than a sensory-immersive experience. Seemingly in the span of seconds, Phil runs out of options and the wherewithal to pursue them, leaving us with a sketch of a tormented man, rather than the griminess of his unwashed skin gnawing at our own, his numb despondence like a contagion we must keep out of our own minds.

In saying all this, I do want to make it clear that I enjoyed Sour Candy, because at the end of the day, I'm hungry for more. I want more time with Phil and more time with the boy, so that I can understand them on a deeper level. I want more visits from the boy's "parents," who all look just like the deer-skulled creature on the book's cover. I want more of Burke's entrancing prose that lets me escape into his narratives. I want more mind-bending, unshakable imagery. Simply put, I want Sour Candy to be a full-blown novel. That it isn't and may never will be is, I suppose, an issue I'll have to reconcile with myself. As it stands, the novella serves as a solid starting place for Burke's sprawling body of work, offering readers a more compact serving of those qualities mentioned above.