Bookshots: 'Songs of a Dead Dreamer and Grimscribe' by Thomas Ligotti 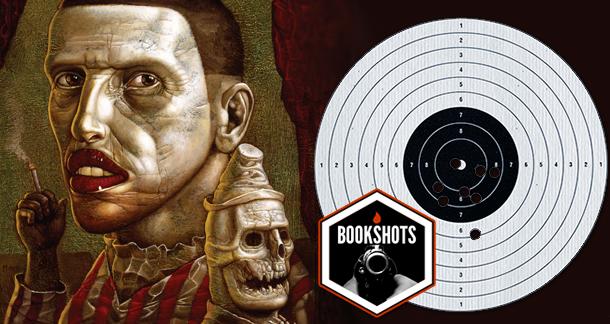 Songs of a Dead Dreamer and Grimscribe: His Lives and Works

Both are groundbreaking works and are must-reads for fans of cosmic horror.

Thomas Ligotti, a reclusive author who rose to prominence and garnered a cult following in the 1980s and 90s with these two short story collections, published together here by Penguin Classics.

This excerpt from Ligotti's bio sums up both Songs and Grimscribe:

...Ligotti is noted for his portrayals of characters who are outsiders to ordinary life, depictions of otherworldly dimensions, and uniquely dark visions of human life. His work is often praised by critics for their richly inventive imagination and evocative prose.

Additionally, consider this passage from the new foreword by Jeff VanderMeer:

Ligotti's fiction, temporarily unhooked from the weird, is best understood as a continuing interrogation of the legitimacy of our modern lives.

Wouldn't dream of doing so.

The works of Edgar Allan Poe and H.P. Lovecraft, to name the most prominent influential authors. Also, Nic Pizzolatto cited Ligotti as a primary influence for True Detective Season One, so if you dug that, you'll likely dig this.

Songs and Grimscribe, as mentioned above, features mostly outcasts, miscreants, misers, and hermits—i.e., people who live in the shadows.

VanderMeer notes similarities between Ligotti's fiction and the cinematic works of David Lynch, so just about anyone that director has ever cast would probably fit right in (and, by the way, Lynch would probably have to direct any Ligotti adaptation).

These are the landscapes of nightmares. No.

Allow me a full paragraph, if you will. From "The Shadow at the Bottom of the World," the final tale in Grimscribe:

But despite their gross palpability, there remained something spectral at the heart of our new dreams. It moved in shadow, a presence that was in the world of solid forms but not of it. Nor did it belong to any other world that could be named, unless it was to that realm which is suggested to us by an autumn night when fields lay ragged in moonlight and some wild spirit has entered into things, a great aberration sprouting forth from a chasm of moist and fertile shadows, a hollow-eyed howling malignity rising to present itself to the cold emptiness of space and the pale gaze of the moon.

To call the fiction collected here "heady" is a gross understatement and a disservice to the psychological weight of Ligotti's narratives. "Surreal" seems also an insufficient word to describe the happenings contained within any story from Songs or Grimscribe; "oneiric" is far more fitting. Reading these tales, one easily assumes Ligotti is a mere transcriptionist for his nightmares, and even if truly so, he masters the art of crafting dreams into compelling fiction. But I think it more likely the man is an expert at mining the subconscious well during the waking hours, able to craft narratives that feel identical to the haunting nocturnal meanderings of our minds. Absent here are the histrionics of your typical horror tale, as Ligotti eschews jump scares and graphic violence for terror that creeps, slithers, seeps and roils, allowing him to touch upon broader topics of paranoia and madness in the process. Look elsewhere for breakneck plots and action over introspection—Songs of a Dead Dreamer and Grimscribe: His Lives and Works are decidedly internal collections, concerned primarily with permanently unnerving its readers by methodically and organically unveiling senses of dread and supernatural obliqueness. Both are groundbreaking works and are must-reads for fans of cosmic horror.

And yet, it is not only horror audiences (myself included) who can appreciate Thomas Ligotti, for he also displays magnificent literary sensibilities, his prose being of the sort that often demands numerous re-reads to fully savor its structural elegance and evocative, even sensuous delights. He is every bit as deserving of the critical praise lavished upon the likes of Joyce Carol Oates, William Gay, and even non-genre authors Jonathan Lethem and Haruki Murakami. If you like your writing complex, dense and sometimes even complicated (but never bloated), you will find much to love in Ligotti's works.