Review by Christopher Shultz November 5, 2014
In: 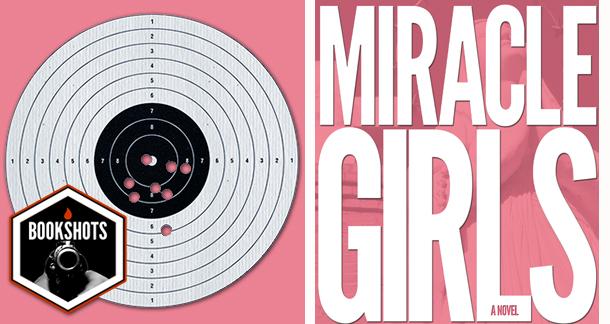 One gets the sense Caschetta offers her readers an idealized version of the Catholic church as a safe-haven for all people, and where strict interpretation of the Bible goes both ways.

M.B. Caschetta, a recipient of the W.K. Rose Fellowship for Emerging Artists, and winner of the Sherwood Anderson Foundation Fiction Award and the Seattle Review prize for fiction. Miracle Girls is Caschetta's debut. More at her website.

It's 1973, and Little Cee-Cee Bianco is on a mission from God. There are missing girls all around upstate New York, and through divine visions, she knows where to find them...sort of. Cee-Cee's grandmother and the war-protesting, rumored-militant nuns of Christ's Most Precious Wounds believe the girl is a walking miracle, but her dysfunctional immediate family thinks she's just crazy. According to Caschetta's website, this novel is a loose retelling of Chaucer's "Second Nun's Tale, The Life of St. Cecilia."

Cee-Cee and Christ's Most Precious Wounds Vs. The Romeville Snatcher

Anything by Karen Russell or Denis Johnson; any "slice of life" novels that focus more on character than plot.

The aforementioned Cee-Cee, ten years old going on twenty. I mean, this kid is the epitome of precociousness.

I haven't seen a ten year-old kid in anything recently (that I can remember), so how about Zombieland-era Abigail Breslin?

Upstate New York in the 70s? Why not? I could get to the Big Apple easily from there. Maybe go see John Lennon at Madison Square Garden.

It's not often a person's life gets turned around, whether by fate or God—whatever you want to call stupid blind luck that alternately ruins or redeems lives.

Sometimes you come across a book that blows your mind so thoroughly you feel compelled to clutch it to your chest like a long-lost relative. Other times, you read a novel so abhorrently bad, your time spent with it can only be justly avenged through the cleansing power of fire. Some books fall within the middle of these two extremes—neither great nor awful, but simply good.

Just after finishing Miracle Girls, I had decided it was this last type of novel. But now, several days later, I find Caschetta's debut has grown on me a little more, sliding slightly more toward the "great" end of the spectrum. This is a fourth type of book altogether, the kind that leaves one impression, and then another. Will I grow to love Miracle Girls even more as time goes by? Hard to say at this point, as novels that grow on you are still a mystery to me. What makes them tick? How do they get on your good side without ostensibly doing anything?

I can at least talk about the qualities that initially won me over. I'm not a huge reader of straight lit-fic in general—I like my fiction "abnormal" in the traditional sense of the word. Miracle Girls intrigued me because, from the description, it sounded like a mystery novel. This turned out not to be the case, and the novel is more of a "small-town-populated-with-quirky-characters" kind of narrative than anything else, offering up mini-stories loosely sewn together by the overarching unsolved disappearances mentioned above. There is enough weirdness abound in these tales to satisfy my specific tastes, so the reading experience was never a dull one. I cannot say I was ever disengaged from the novel overall.

Caschetta's prose is another quality worth mentioning, as it mostly serves as a co-star, slightly less prominent than the characters and situations. Every now and again, the language tries to steal the spotlight, resulting in a few head-scratching metaphors ("Now the trees scrape and twist like old women with their heads uncovered."—what exactly does that mean?). But these instances are infrequent, enough so they don't bog down the narrative.

One more thing worth noting: though set in 1973, Miracle Girls feels modern, making the book a kind of parable for today's problems: child abuse, kidnapping, rape culture (specifically, victim-blaming), even homosexuality. Homosexuals are defended by Cee-Cee via a message from the Virgin Mary, who insists "God loves you most of all." This statement is bolstered by a "prophecy" from Luke: "Blessed are ye, when men shall hate you, and when they shall separate you from their company, and shall reproach you, and cast out your name as evil, for the Son of Man's sake."

One gets the sense Caschetta offers her readers an idealized version of the Catholic church as a safe-haven for all people, and where strict interpretation of the Bible goes both ways. I'm not sure this utopia is actually attainable, but within the world of Miracle Girls, you can almost believe it.