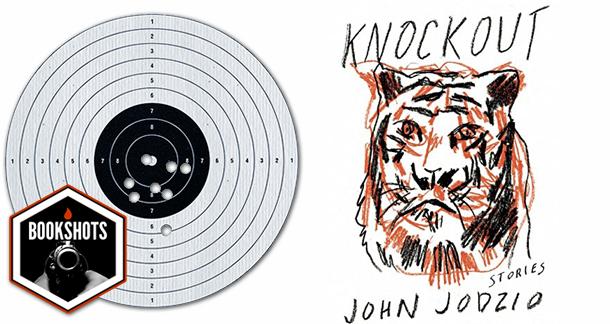 Jodzio's characters are likable for the sheer fact they are so real, so human. This is a writer in top form, and 'Knockout' is aptly titled.

John Jodzio, author of the short story collections Get In If You Want To Live and If You Lived Here You'd Already Be Home, as well as numerous other short works. More info at his website.

A collection of transgressive short tales centering around fucked-up but fleshed-out people doing fucked-up, sad things. This may sound dour, but in fact the stories are all pretty hilarious (and sometimes sad).

Let's focus in on Jayhole, who isn't the protagonist of "Duplex," but who might be my favorite character from the entire collection. He's described by Jodzio as such:

Jayhole was a large man with a barrel chest and a short ponytail that resembled a salt and pepper turd. He'd been a bounty hunter for twenty years but then he'd gotten shot in the kneecap. He walked with a hitch, but he had this wicked cane with a bunch of writhing snakes on the handle that made it look awesome to have a fucked-up leg.

It would have to be Ron Perlman.

I feel I've lived in these mostly Midwest settings already.

This is the first sentence of the story "Winnipeg":

I'm on the wrong side of history and I've got a vodka-soaked sea sponge shoved up my ass to help me forget.

Knockout almost seems to good to be true. The pace is so fast, you barrel through the entire collection in a few days (if you're a slow reader like me; faster readers may have it read in an afternoon), and yet, the prose and depth of character development leaves an impression typically reserved for longer works. Put another way, each short tale feels more like a novel, even though most are maybe ten pages in length and occur within relatively short spans of time. And, as stated above, Jodzio approaches his subject matter with an acute sense of humor, making stories that should be depressing perversely entertaining. Moreover, the author generates tons of sympathy for characters we might find morally bankrupt in real-life. Whether he's writing about an alcoholic widower/single father ("Great Alcoholic-Owned Bed and Breakfasts of the Eastern Seaboard"), guys who like to sneak into the zoo to basically give the Vulcan neck-pinch to animals (the titular "Knockout"), a sociopathic ex-bounty hunter (the aforementioned "Duplex"), or a man sneaking into his dead lover's house to steal her panties ("Ackerman Is Selling His Sex Chair for Ten Bucks," which wins the Best Title Ever prize), Jodzio's characters are likable for the sheer fact they are so real, so human. This is a writer in top form, and Knockout is aptly titled.