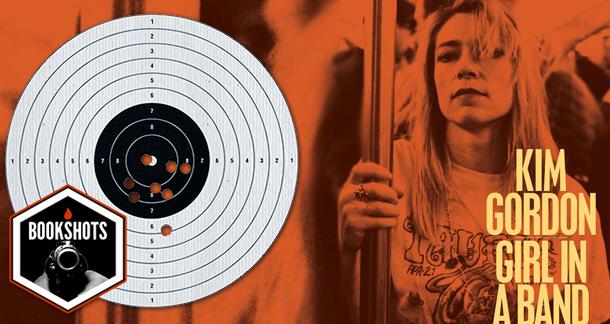 Girl in a Band

Gordon discusses her childhood in California, the New York art scene and the early days of post-punk, No Wave and musical experimentation, founding an influential and acclaimed band, success, world tours, motherhood, love, divorce and its aftermath.

There isn't one more appropriate than Girl in a Band, one, because it's a line from her SY song "Sacred Trickster," two for reasons I'll get into in a minute.

Our Band Could Be Your Life by Michael Azerrad, John Lennon: The Life by Philip Norman, and Not That Kind of Girl by Lena Dunham.

The idea of a Hollywood biopic about Gordon and/or Sonic Youth makes my brain hurt a little. If an indie director mounted the project, they'd probably just cast Gordon herself.

Much of the memoir takes place in 1980s New York, a time when the Big Apple was infested with trash, rats, grime, criminals, and an energetic underground art and music scene. So, yes.

I have to go with an entire paragraph here:

L.A. in the late sixties had a desolation about it, a disquiet. More than anything, that had to do with a feeling, one that you still find in parts of the San Fernando Valley. There was a sense of apocalyptic expanse, of sidewalks and houses centipeding over mountains and going on forever, combined with a shrugging kind of anchorlessness. Growing up I was always aware of L.A.'s diffuseness, its lack of an attachment to anything other than its own good reflection in the mirror.

Several media outlets have already made a big to-do about Girl in a Band and Gordon's "cattiness" toward fellow musicians. These articles reprint quotes taken out of context and paint the book as some kind of dishy trash rag on the 90s alternative scene. While many passages in Gordon's memoir are blunt and even harsh at times, if you're looking for gossip on fellow celebrities, look elsewhere: the only famous person she really dishes on here is herself.

She begins with "The End"—Sonic Youth's final show at a big rock festival near São Paulo, Brazil, the corporate-ness of the event clashing against the indie/punk rock aesthetic the band always strived to maintain, the pouring rain acting as a "corny movie mirror of the strangeness between" her soon-to-be ex-husband and bandmate Thurston Moore.

I was the last one to come on [stage], making sure to mark off some distance between Thurston and me. I was exhausted and watchful. Steve [Shelley] took his place behind his drum set like a dad behind a desk. The rest of us armed ourselves with our instruments like a battalion, an army that just wanted the bombardment to end.

Gordon deals directly with her divorce from Moore toward the end of the book, calling the ordeal "just another cliché of middle-aged relationship failure—a male midlife crisis, another woman, a double life." She does the literary equivalent of slitting her wrists, bleeding all her raw emotions—hurt, anger, frustration, that hollowed-out feeling that goes beyond sadness—all over the proverbial page. But even in her most frank and revealing moments, Gordon pulls some punches, refusing, for instance, to name Moore's mistress even though her identity is now publicly known. Because this memoir isn't intended to be a tell-all. It's all about Gordon, her identity, who she used to be, who she is now—as an artist, yes, but more importantly, as a person—where she's been, and where she's going.

During her Sonic Youth days, journalists used to chase Gordon with a single question: "What's it like to be a girl in a band?" After giving birth to her daughter, it switched to, "What's it like to be a mom in a band?" Because of her shyness and introverted nature, Gordon feels she's never really had a chance to break free of this image—the icy, statuesque female at the center of a triangle comprised of two wild guitar-god-men and one thunderous drummer, the focus pull for male gaze, the sex object that helps market this unconventional music. With Girl in a Band, Gordon says, "here's what it's like." She reveals a person underneath the persona, an individual who never wanted anything more than to express herself, demystifying—just as Iggy Pop did—the idea of a rockstar.

When I'm at my most focused onstage, I feel a sense of space with edges around it, a glow of self-confident, joyful sexiness. It feels bodiless, too, all weightless grace with no effort required. The need to be a woman out in front never entered my mind at all until we signed with Geffen.

Sonic Youth are fun to listen to and this looks like a good read.