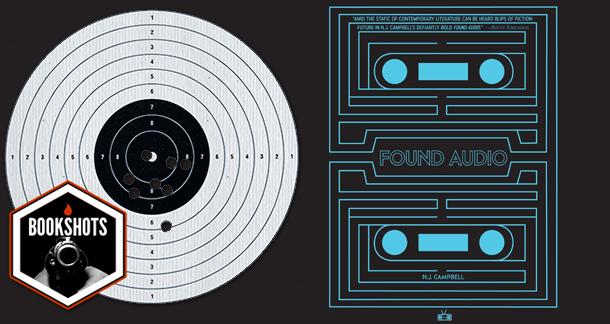 N.J. Campbell, a full time artist, author, and packaging clerk who has published short stories, articles, and poems in various print and online venues. This is his debut novel.

Amrapali Anna Singh, an audio expert/analyst/scholar, receives three tapes from a mysterious man. The tapes, which contain the deposition of an adventure journalist, bear the stamp of a library in Buenos Aires, Argentina, but it may or may not exist. The stories told in those tapes by the unnamed journalist are as bizarre as they are unique, horrifying, incredible, and creepy.

'Found Audio' is steeped in a wonderfully creepy atmosphere that sucks the reader in and doesn't let go for the duration of the weird, dark, dreamlike ride.

Giorgio De Maria's The Twenty Days of Turin, Tobias Carroll's Reel, John Langan's The Fisherman, and the work of H.P. Lovecraft, especially "The Dream-Quest of Unknown Kadath" and, to some extent, the rest of the stories in the Dream Cycle.

Amrapali Anna Singh — the audio analyst who receives, analyzes, and then "presents" the content of the tapes to the acquaintance who publishes them.

Unnamed journalist — he writes about extreme things. He is the one being interviewed in the tapes by unknown individuals.

There's a lot of great writing here, but this line where the journalist is describing his lack of dreams is superb:

Really, the most conspicuous thing about it is the gaping maw of its own absence, much like I imagine space beyond the stars or space after everything has pulled itself apart... An endless vacuum without the possibility of coming into contact with anything other than the enormity of its own nothing—its infinite absence.

Found Audio shifts right before your eyes. It moves at a great pace, but the beauty of it comes from the lateral movements, not its forward momentum. Once you think you have this narrative figured out, something happens that pushes you back into the realm of uncertainty. I have a weakness for novels that feature stories inside stories, and this is one of the purest I've read in that subgenre. The feeling that you're "listening" to the unnamed journalist, as well as to every mysterious sound, voice, and silence that appear in the tapes, is a testament to Campbell's storytelling skills and one element that makes this novel unique. From the eerie words of a legendary snake hunter in the Louisiana bayou to a chess master who shows up in the journalist's dreams and then tells him he did so in real life when they meet, Found Audio is steeped in a wonderfully creepy atmosphere that sucks the reader in and doesn't let go for the duration of the weird, dark, dreamlike ride. Many authors try to work in the interstitial space between the waking world and the realm of dreams and attempt to create satisfying narratives despite the mandatory unreliable narrator that comes from said interstitial space, and Campbell pulls both elements off with ease. This last accomplishment becomes even more impressive when you realize this is a debut novel. If you like novels that keep you glued to the pages and constantly rethinking where the story, the main character, and even reality are going next, then make sure you don't skip this one.