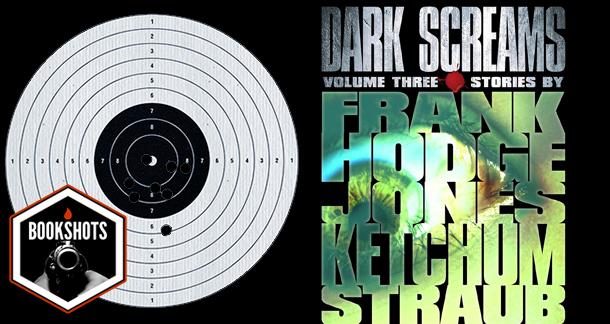 Peter Straub, Jack Ketchum, Darynda Jones, Jacquelyn Frank and Brian Hodge. The anthology was edited by Brian James Freeman and Richard Chizmar, both of Cemetery Dance fame. More info here.
Freeman and Chizmar have brought their A-game...If you pick just one installment in this series to read, pick this one.

A child writes of his encounters with a supernatural entity; a writer faces a group of his fans, who may have ulterior motives; a teenage girl reaches out to a haunted peer, and in doing so begins an investigation into a long-dormant crime; a teenage boy obsesses over a classmate; and two neighbors explore the end of the world.

The previous Dark Screams entries, Cemetery Dance magazine, or any of the authors featured in this collection.

There are obviously five protagonists, one for each anthologized story. We'll focus on Jonathan, the writer from Jack Ketchum's "Group of Thirty." This character is basically a fictionalized version of Ketchum himself.

All five stories more or less take place in the suburbs, minus Hodge's "The Lone One and Level Sands Stretch Far Away," which features a city straddling the line between prosperity and disintegration. So that's a no.

This from the aforementioned Brian Hodge narrative:

Our flashlights had never seemed so feeble, had never revealed so little—small pools of light skimming over a bleached world choked on shadows, shadows over all.

Let's examine the Dark Screams series in relation to horror movie franchises. The third installment in such series rarely merits mentioning—Leatherface: The Texas Chainsaw Massacre 3, Hellraiser III: Hell On Earth, Candyman 3: Day of the Dead, Scream 3, Child's Play 3, and so on. But then there are those exceptions to the rule, films like Halloween III: Seasons of the Witch (a grossly underrated film despite the absence of Michael Myers), A Nightmare on Elm Street 3: The Dream Warriors, The Exorcist III: Legion, Day of the Dead, Return of the Living Dead 3, and many more.
Happily, this new addition to the Dark Screams family falls into the latter category, those surprising gems that equal (and sometimes even surpass) the shine of their predecessors. The line-up of authors certainly aids in Volume Three's overall quality. We have two really big names, Straub and Ketchum, plus the not-as-well-known-but-should-be Hodge. Appearing alongside these veterans of the genre are relative newcomers Jones and Frank, both best known for popular contributions to the YA sub-genre.
The stories on display here are worthy of the famous names. Straub's "The Collected Short Stories of Freddie Prothero" gives us a first-person account of a small boy's encounters with an unknown and insidious entity—a difficult read both practically (Straub utilizes grammatical and spelling errors to reflect the writing style of an adolescent) and emotionally. Ketchum departs from his usual unnerving milieu and ventures into satire with his largely autobiographical "Group of Thirty," a gambit that pays off quite well. "Nancy" shows Jones's ability to craft fiction suitable for both teenagers and adults with this shadowy and smart supernatural mystery that is pure fun to read. But while Jones gives us a light-hearted, teen-driven romp, Frank delves into the dark side of young romance, presenting us with "I Love You, Charlie Pearson," about a disturbingly deluded boy's obsession with an in-crowd girl (a deeply unsettling narrative marred only by a bit of a ludicrous ending). Finally, Hodge's "The Lone One and Level Sands Stretch Far Away" both astounds with spellbinding prose and horrifies with its plot.
All in all, Freeman and Chizmar have brought their A-game to Dark Screams: Volume Three. If you pick just one installment in this series to read, pick this one.