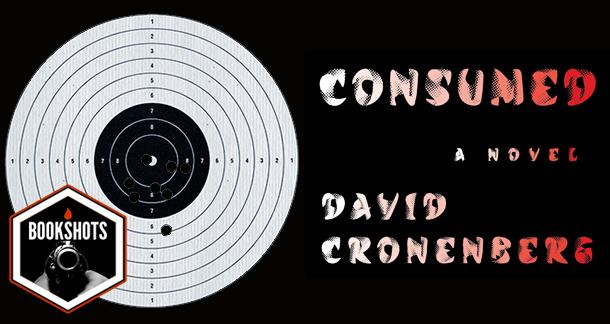 You can't spell engrossing without gross. And 'Consumed' is delightfully so... [It] has more twists than a penis afflicted by Peyronie's disease.

Depraved Dave Cronenberg, King of Venereal Horror, director of Scanners, Videodrome, The Brood, The Fly, as well as adaptations of unfilmable literary novels such as Naked Lunch, Crash, and Cosmopolis.

A pair of tech savvy journalists (of the yellow variety) explore the death of a famous French philosopher from opposite ends, meeting in the middle like Lady and the Tramp eating spaghetti. Spaghetti made out of human flesh.

Ingest My Left One

The films of David Cronenberg, especially his earlier work (Fast Company not included); the novels of J.G. Ballard, Don DeLillo, and Vladimir Nabokov.

Naomi and Nathan: Journalists, technophiles and lovers, trotting the globe in search of bizarre stories to document. They spend the bulk of the book apart, connecting mostly through cell phones and video screens, but their individual pursuits become inevitably entwined, highlighting the six degrees of separation of the internet age.

Brit Marling, star of Another Earth and Sound of My Voice for Naomi. She's got the range to cover the strength and vulnerability. And Adam Driver, that dude from Girls (which I've never seen) as Nathan. I like the cut of his jib.

Cronenberg gives us many beautifully constructed sentences, but this bit of dialog sums up the book's humor, themes, and sexuality nicely:

"So? My breasts are now radioactive. I'm not allowed to hug pregnant women for at least three months. What do you think of that? Journalistically?"

For those unhappy with the direction of Cronenberg's recent directorial output, his debut novel is a return to the body horror themes that made his earlier work so engaging. Or should I say engrossing? Because you can't spell engrossing without gross. And Consumed is delightfully so. The canvas of the novel allows Cronenberg to indulge himself in ways prohibited in film, and he throws in every perverted idea but the kitchen sink transforming into a biological construct of phallic pipes and hot and cold running blood. These ideas include:

...as well as some weirdness about North Korean hearing aids and the philosophy of sound design.

That's not to say Consumed is a retread, or even a distillation. It is more of a continued exploration. Cronenberg's obsession with the physical and its intersection with technology is taken to its logical conclusion here. Not in the extreme of science fiction storytelling, but in the realism of science fact. Consumed reflects how everyday technology has been thoroughly integrated into our lives, and how that integration has simultaneously expanded our horizons and made the world an infinitely smaller place.

Cronenberg's style is informed by the authors referenced above, and his writing is smart and incisive. The story is viewed through his typically clinical gaze via young intellectuals Naomi and Nathan, and has more twists than a penis afflicted by Peyronie's disease. There is much pleasure to be derived from its inventiveness, more so than... a penis afflicted by Peyronie's disease. Well, I can't vouch for that last one personally, but I can assure you that fans of Cronenberg's cinematic work as well as fans of dark literary fiction will be delighted with what he's produced.

Sold. I've only seen Eastern Promises and A History of Violence, so this should be a cool way to jump into Cronenberg's body horror before watching the films.

You had me at "Spaghetti made out of human flesh."

Why do you get to review all the Grade A shit?

And this from the man who got to read Hello Devilfish!

Some people are *never* happy.

Joshua Chaplinsky from New York is reading a lot more during the quarantine October 16, 2014 - 5:16am

Perk of the job! And I've been tracking the release of this book for years.