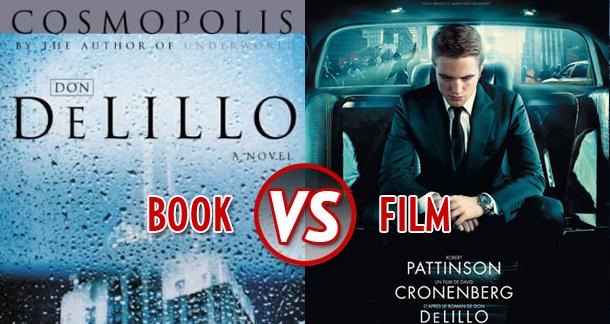 There is a specter haunting the world of literary adaptations and it is this: the book is always better than the film.

But there are exceptions to this rule-- especially where the output of director David Cronenberg is concerned. The 69-year-old auteur has never been one to shy away from difficult source material (see: Naked Lunch, Crash), and has generally been successful at shepherding the unfilmable to the silver screen (see: Naked Lunch, Crash). Most directors stop taking risks at a certain stage in their career, but not Cronenberg. Case in point, his adaptation of one of the oddest road novel's of all time: Don DeLillo's prescient take on the haves versus the have-nots, The Dark Knight Ri-- I mean, Cosmopolis.

Cosmopolis tells the story of Eric Packer, a 28-year-old billionaire who wants to get a haircut. But not just any haircut will do; he wants a haircut from the barber who gave him his very first haircut. So he hops in his high tech, bulletproof limo and begins the journey across Manhattan. This, despite the fact that the President is in town, a famous rapper's dead body is being paraded through the streets, anarchists dressed as rats/armed with rats are scurrying about the city, and some dude is out there trying to kill him. Also, he's borrowed so heavily against the yen that the downfall of the entire US economy is a foregone conclusion.

So let's just get it out of the way and address the 900 pound gorillephant in the room who shat on your rug and slept with your sister-- Robert Pattinson's terrible acting doesn't ruin this movie.

What. You don't know this?

Visually, Cronenberg is a perfect match. His assured direction, along with the sleek production design of Arvinder Grewal and Toronto as a stand-in for the Big Apple, gives an otherworldly life to the near-futuristic film. Cronenberg is nothing if not an accomplished technician. But the real trick to DeLillo's novel is the dialog. The book is filled with rambling, often didactic conversations, written in a hyper-realistic style. Theatrical repartee with off-kilter rhythms and turn-on-a-dime non-sequiturs. It is the literary equivalent of a composer eschewing standard 4/4 for more complex time signatures. Get an inexperienced musician to interpret the composition, get an actor who doesn't have the chops, and you're screwed.

Which puts a lot of pressure on Robert Pattinson. I'll be the first to admit, I wasn't happy when he was cast as Packer. I thought Cronenberg's initial choice, Colin Farrel, was a much better one. But that fell through and a movie needs star-power to get made, so enter a young heartthrob best known for a certain romampire franchise who wants to spread his acting wings and migrate to more challenging territory. But hey, that's only a metaphor; he's not actually a bird. And those wings aren't real; they're a kindergarten craft of glue, feathers, and popsicle sticks. Fly too close to the sun with those puppies and it's crash and burn, for you and the entire film.

I'm sure plenty of DeLillo purists would say, why even bother? The dialog won't translate well, and without it-- what's the point? But either way you go, I think Packer's Chief of Theory, Vija Kinski, would approve. Her musings on capitalism could easily apply to works of art held too precious:

In other words, if you crash and burn, you can rise from the ash like a phoenix, mixing metaphors and references and idioms to your hearts content. Sometimes you have to destroy the source material, reinvent it-- like Cronenberg did with Naked Lunch, or Curtis Hanson did with LA Confidential-- to do it justice.

But Cronenberg plays it extremely faithful here-- some might say, too faithful. In a Q&A after the screening I attended, he said he wrote the screenplay in 6 days. He transcribed all the dialog from the book into screenplay format, cut a few scenes, and added some descriptions. Done. He didn't even have to do any revisions.

Cronenberg also said that when Pattinson showed up on set the first day, one of his co-stars asked him how he had prepared for the role, which sent the actor into a panic, because he didn't. Cronenberg then had to talk him off a ledge/out of his trailer/away from the craft service table. But the director went on to say that Pattinson was like a pro tennis player-- highly adaptable. You put him in there and he adjusts to his opponents accordingly. He plays off the other actors.

This was after I had seen the film and formulated my own opinion of his performance, mind you.

So let's just get it out of the way and address the 900 pound gorillephant in the room who shat on your rug and slept with your sister-- Robert Pattinson's terrible acting doesn't ruin this movie. That's because, gasp!, he's not terrible in it. His expressionless, Keanutone delivery is actually a decent fit for the character. I just feel like Cronenberg, who told the audience he doesn't do rehearsals, probably should have in this case. To go back to the musical metaphor, Pattinson can actually jam, but a little more familiarity with the material, a little more practice with the other musicians, would have made for a tighter performance.

And that's the main problem with the film-- the rhythm is inconsistent. In some of the scenes, it's like watching an experienced orchestra, but in others, the cadence seems off. In some scenes, Pattinson approaches really-goodness, in others, he just seems lost. I believe part of it has to do with what actor he is paired with, and how he is playing off them. Part of it is how he chooses to deliver his lines. Sometimes it is awkward and stilted. Sometimes it sings.

The final scene, for instance, between Eric Packer and Benno Levin/Richard Sheets (played by Paul Giamatti), is an atomic bomb of aplomb. The G-man brings some much-needed humanity and emotion to an otherwise frosty film, completely dominating the climactic confrontation. But Pattinson rises to the occasion, saving the best for last like Vanessa Williams, turning in his best work to date. (Full disclosure: this is the only film I've seen him in.) He's also quite good in the scene where he talks his Chief of Finance to orgasm while getting a prolonged prostate exam in the back of the limo.

That's right. Did I forget to mention that Cosmopolis is also an incredibly funny film? The stylized dialog may seem more natural on the page, but hearing it vocalized by actors serves to highlight just how absurd it can be. Rereading DeLillo's novel, I was struck by how much funnier I found it the second time. But it never made me laugh out loud like the film did.

But overall, Cronenberg's film proves the old adage about literary adaptations true. It's not a failure, by any means, but the student doesn't quite become the master on this one. The old market has been re-exploited, but the industry of DeLillo's written word has not been harshly eliminated. A middle ground has been found between the two, with mixed results. In a recent appearance on The Daily Show, Pattinson exhorted Twilight fans to turn out in droves to support Cosmopolis (despite the fact that it only opened in 6 theaters). There is no way they will like this film, but I sincerely hope they show up. That way, Cronenberg will be able to continue to take interesting cinematic risks like this one.

Anyone else seen the film and/or read the book? What did you think?

"There is no way they will like this film, but I sincerely hope they show up."

I went to see the UK opening of the movie a couple of months back and at least 20 people, most likely Twi-Hards, walked out before the third act. Being a fan of both the book and Cronenberg, I expected, and enjoyed, seeing the confused/annoyed faces traipse out the cinema.

Not read this one yet. Need to. It's going remarkably cheap in HMV.

Joshua Chaplinsky from New York is reading a lot more during the quarantine August 20, 2012 - 4:23pm

I'm looking forward to this one, but I have no idea when I will get to see it. We rarely get films like this in my city, but it happens from time to time. As for people walking out, I honestly don't believe that you can say it was Twilight fans. Many people will blindly enter a theater with no prior knowledge of the film, or very little, and walk out if they find it unappealing. With a film like this it will happen a lot, because most people want mainstream films. This one is a hard sell for mainstream audiences. Another reason I say not to assume it is Twilight fans is their dedication to him. Most of them will sit through anything he is in, as long as they get to stare at his face for the length of a film. I used to be that way with Steven Strait, who is more of a pretty face than an actor :-P

May have to see it now.

DeLillo is probably the only author whom B.R. Myers was 100% right about.

As a huge fan of DeLillo who loved Cosmopolis (though it is a tame, minor work compared to the wallop packed by Underworld or even The Body Artist) I mostly agree with this writeup. Though I would give the film a 4 out of 10, whereas it sounds like he's giving it maybe a 5.5.

But I have to say, what is "risky" about adapting your screenplay so closely to the book that it only took him 6 days to write it? That sounds like the opposite of risky to me. The book is risky--for all the reasons outlined, esp. the dialogue, which mixes nonsequitor and deadpan delivery to make what I think is best described as a kind of bizarre series of rituals. But doing an absolutely straight adaptation of a risky book does not nec. make for a risky film. Good post though.

I have not read the book, but I have a feeling that Eric is not killed in the end.
Could someone who has read the book tell me the following:
Does the doctor say "Let it express itself" in the book?
Does Eric get out of the barber chair as only one side of his hair has been cut? (asymmetrical)
Does he promise to come back as he leaves the barbershop?
To me, those scenes indicate that Eric does finally understand what he did wrong with the currency betting. He realizes the value of the asymmetrical and understands that he can win over Benno by letting him express himself. As with everything else in his life now he is able to predict and manipulate even a crazy killer's actions.