Bookshots: 'Colorless Tsukuru Tazaki and His Years of Pilgrimage' by Haruki Murakami 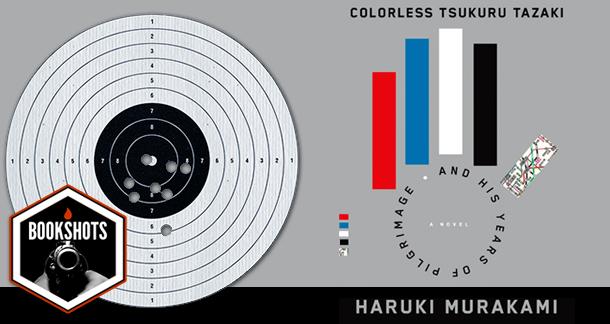 Colorless Tsukuru Tazaki and His Years of Pilgrimage

The mystery behind the group's abandonment of Tsukuru was intriguing, and...I was expecting the reason for this abandonment to be even more compelling—like, the friends discovered that Tsukuru was a Cylon sleeper agent or something.

Haruki Murakami. You might've heard of him. He's won a lot of awards n' stuff.

Sixteen years after being abruptly cut off by his closest friends, the titular character sets out on a journey to find out what went wrong, and hopefully make sense of his colorless life.

Dodging Bad Elves (You'll get this when you read the book.)

Obviously, Murakami's other books, but also Jonathan Lethem's Chronic City, or any other "straight" story with magical realism moments sprinkled in for taste.

Tsukuru, a kind of modern-day everyman, but one who gives off very little personality and just seems to blend into the background. He also LOVES train stations. He designs them, and he spends his free time observing the platforms and people at his favorite Tokyo stations.

True to the character's description as "middling, pallid, lacking in color," I had trouble really seeing Tsukuru in my mind. I finally just settled on Murakami himself, not because I think the author fits this description, but because I just needed a face, damn it.

Hell yeah, I'd live in Japan. Well, maybe not Nagoya, Tsukuru's hometown—sounds about as bland as he is. But Tokyo, yeah, sign me up!

But even if he had dreamed, even if dreamlike images arose from the edges of his mind, they would have found nowhere to perch on the slippery slopes of his consciousness, instead quickly sliding off, down into the void.

As far as Murkami's impressive body of work goes, I'm still a bit uninitiated. Prior to Colorless Tsukuru, I'd only read Hard-Boiled Wonderland and the End of the World, a novel which I absolutely loved for its wild originality and plot turns, its blend of noir and fantasy, and its ability to ponder existentially without bogging down the narrative. Murakami gives us the opposite qualities with his latest effort, tackling the recognizable, modern-day world and all its doldrums—love, loss, identity, etc. Given this, the narrative overall is much more subdued than in Hard-Boiled, and existentialism takes center stage.

According to her review for the New York Times, Patti Smith (yep, that Patti Smith) notes that Murakami is usually divided in this way, sometimes giving us his "surreal, intra-dimensional side," sometimes his "minimalist, realist" side. In other words, some books are introspective, and some are focused on external affairs—or, as Stephen King puts it, some are "innies" and some are "outies." Personally, I like a good blend of the two, so Colorless Tsukuru, which is most definitely an "innie," left me a bit underwhelmed. That's not to say that "innies" are inherently bad, and when done well they can hook me just as thoroughly as an excellent "outie/innie" can. I just felt this book was a bit too meandering and unfocused.

Moreover, my problems with Colorless Tsukuru run deeper than a mild aversion to "innies." I took issue with the big reveal about a quarter of the way through the novel, the reason Tsukuru's friends abandoned him all those years ago. It turns out that Shiro, the "most beautiful" female of the group, claimed that Tsukuru drugged, raped and impregnated her while she visited him in Tokyo. None of the other friends believed that it was Tsukuru who committed this vile act, but because of her fragile mental state, they had no choice but to excise him from their group.

This plot point rubbed me in all the wrong ways. While no one can seem to wrap their brains around an actual statistic, instances of false rape allegation happen far less than everyone believes, mainly because (and I'm referring to conversations I've had with victims here) accusations are often recanted because the victims feel coerced into doing so, either directly by law enforcement agencies, friends and families of the victim and the accused alike, or indirectly by police, family and friends through lack of concern. I'll give credit to Murakami for not demonizing Shiro for her false claims—all the characters, even Tsukuru, understand the mental and emotional context behind their friend's actions, and they never display anger toward her—but I still find this use of the accused-man-as-victim trope off-putting and irresponsible, particularly since the whole thing feels throwaway, a practical means to an end. Murakami seems primarily concerned with the fact that Tsukuru's strong group of friends marooned him; the reason for this marooning feels like an afterthought. If you're going to tackle rape in any way, it shouldn't be casual.

But even if we remove the rape culture implications, the fact remains that a trope is still a trope, and the one Murakami employs here is a tired one. We've seen mentally unstable women falsely accusing men in countless narratives: Harper Lee's To Kill A Mockingbird (albeit, racism was the real focus there), David Mamet's highly problematic Oleanna, Ian McEwan's Atonement (and later the film adaptation), and 90s nostalgia films The Crush and Wild Things, just to name a few. The mystery behind the group's abandonment of Tsukuru was intriguing, and given the craziness of Hard-Boiled, I was expecting the reason for this abandonment to be even more compelling—like, the friends discovered that Tsukuru was a Cylon sleeper agent or something. So Murakami's use of this well-worn device was not only problematic for me, but also disappointing, a let-down.

But hey, I suppose the prose itself was good, so there's that, right?

I really enjoy 1Q84, which was my first Murakami, but this doesn't sound that interesting to me.

Yeah, problems aside, the book was just kinda dull.