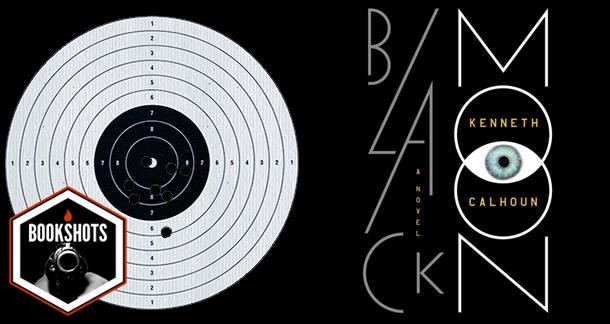 'Black Moon' is one of the best books I've read in 2014...Calhoun has made a Godzilla-size blip on my radar.

Kenneth Calhoun, a graphics design professor with stories published in The Paris Review, Tin House, and the 2011 Pen/O.Henry Prize Collection. Black Moon is his first novel. More info at his website.

A handful of southern California residents navigate the crumbling landscape in the wake of a nationwide insomnia epidemic that more or less turns people into zombies (though this isn't a typical zombie narrative).

Anything in the zombie camp (though again, this isn't your typical fare), just about anything by Jonathan Lethem, and the heady horror stylings of Ramsey Campbell (even though Black Moon isn't exactly horror, either).

The novel features an ensemble cast of well-drawn characters, but perhaps the most significant of these is Biggs, one of the few people left who can still sleep naturally. He braves the mean, "sleepless"-infested streets in search of his wife Carolyn, who disappears shortly after succumbing to the worst stages of the insomnia plague.

His name is Biggs, so naturally I pictured Jason Biggs of American Pie fame, last seen displaying some pretty impressive acting chops as Larry in Orange Is The New Black (and thankfully, the character in Black Moon is nothing like Larry).

A post-apocalyptic California, overrun with crazed insomniacs, littered with garbage and dead bodies? Probably not, but at least the weather would be nice.

I could very well reprint the entire novel here, as it is a beautifully written piece of work. However, if I had to choose just one (or two), it would be this:

He would press his lips against her closed eyes. He would feel her eyes moving as dreams unfurled before them, a churning kaleidoscope of stories.

There's much to love about this debut novel. Perhaps its most attractive feature is the language, which I intimated above. I also compared its author to Jonathan Lethem, and I stand by this, though I think Calhoun's prose is more accessible, but no less stunning, than that of his predecessor. Lethem tells vivid and compelling narratives through literary gymnastics, while Calhoun dazzles with the subdued beauty and grace of a ballet.

This is not to say that Black Moon is focused solely on language. Calhoun does what every writer worth his or her salt should do: uses his prose as a vessel for telling the reader an evocative, immersive story. By plucking aspects of the zombie genre (the "sleepless" shamble about day and night, becoming dangerous with rage only when they catch someone sleeping, prompting Biggs to feign insomnia in order to "blend in"), Calhoun draws us in with something familiar, but then quickly subverts our expectations with a novel less concerned with action and violence (though he does deliver on this end), and more concerned with psychology and introspection. As I mentioned above, the novel features an ensemble cast of characters, each with their own histories and perspectives that add to the larger examination of a world without sleep. Or rather, a world without dreams, which is the true core of Calhoun's book. What would happen to a species if a significant portion of their collective minds simply stopped functioning? From our Everyman Biggs to Felicia, a college student coincidentally engaged in sleep research at a prestigious center on the coast, to a young child separated from her parents in the wake of the epidemic, as well as several others, Calhoun explores this question from multiple perspectives (with multiple consequences, some of which turn out grim). No characters feel forced, no actions feel false, and each narrative arc is resolved satisfactorily, with a few unanswered questions left perfectly hanging.

The year is early yet, but so far Black Moon is one of the best books I've read in 2014. Likewise, Calhoun has made a Godzilla-size blip on my radar. I've bookmarked his short stories available online, and I can't wait to see what else he has in store for us, novel-wise. A highly-recommended read.

Joshua Chaplinsky from New York is reading a lot more during the quarantine March 3, 2014 - 10:56am

Sounds great. I've got a copy myself. You've got me excited to read it.

Wow. As someone who has been watching and reading about zombies since before they were the next big thing, I have become more or less bored with the proliferation. This is the first story I've heard about in a long time with a zombie premise I haven't heard before. I am intrigued.

That sentence you quote gave me an instant flashback to Wim Wenders' 'Until the End of the World' - a film I love (despite it's ponderous U2- referencing title). I am now compelled to read this, to see how deep the resemblance goes.