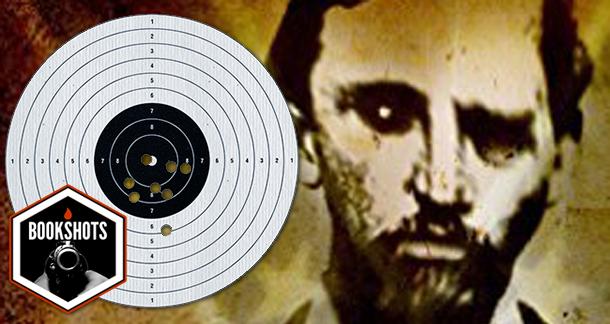 Stands out among its trade paperback brethren, with its nuanced language, complicated characters, engrossing narrative, and subtle commentary on the past and the present.

Edward M. Erdelac, author of the weird western series Merkabah River and several other novels. More info at his blog.

Barclay Lourdes breaks into Andersonville, one of the most notorious rebel prisons during the Civil War. To say more would spoil the plot, but his reasons for doing an ostensibly stupid thing revolve around the never-ending battle between good and evil.

The novel's blurb compares Andersonville to the works of Stephen King and Joe Hill, and I can certainly see the similarities. I would also add the TV show Supernatural.

Tyler James Williams, who played Noah on The Walking Dead.

They were skeletal things with overlarge hands and flapping feet, patchy fetal heads, and ratty beards jumping with dark wigs of flies and lice. Their skin was so uniformly begrimed by smoke and filth that Barclay couldn't immediately tell white from black. The uniforms that hung in tatters form their bony bodies had been bleached as gray as the enemy's by the sun.

Hydra, a division of Random House that published not only Andersonville but also the Dark Screams series, is quickly becoming one of the most intriguing imprints in the horror world, because it is clear they are going for the digital equivalent of the "grocery store trade paperback rack"—the antithesis of the "lit-fic-horror" movement embodied by authors Laird Barron, Josh Malerman and Maria Dahvana Headley, to name a scant few. Lurid, brightly-colored covers wrapped around tales concerned not so much with prose as with action, suspense, and gore. Erdelac's novel serves as a perfect representation of Hydra's approach to the genre.

Now, don't misunderstand me: I'm a fan of the "grocery store trade paperback." Why? Because, a) there is just as much room for books that satisfy artistic sensibilities as there are books that simply entertain, and b) the great thing about supposedly "sub-par" fiction of this ilk is, often times artistic sensibilities are still satiated alongside a desire for a good, escapist plot and a whole lot of violence.

Again, Andersonville fits the bill. Erdelac's writing is definitely reminiscent of early King, in that it communicates ideas in a straightforward manner without being too blunt or clunky. Put another way, the prose sits right in the middle between poetic and utilitarian, allowing the reader to get absorbed into the characters and the story.

Speaking of characters, Erdelac gives us plenty to love and to hate without too much polarization. The heroes have their flaws and weaknesses, and even at their worse, the villains are still complex and able to elicit shards of sympathy in the reader. This is especially important considering the backdrop of the Civil War. It would have been easy to cast the Confederacy as pure evil, but Erdelac shows us that even good, sensible, and non-racist people ended up fighting on the wrong side of the battle due to propaganda and fear.

Bear in mind too that Andersonville was a very real place, and many of the horrors described within the prison walls are historically accurate. As such, the novel of the same name is simultaneously topical, given the current debate over the continued flying of the Confederate Flag, and it serves as an entertaining (if not terrifying) history lesson.

Overall, Andersonville definitely stands out among its trade paperback brethren, with its nuanced language, complicated characters, engrossing narrative, and subtle commentary on the past and the present. One might even call this a "beach read," and summer's not quite over yet, so pick this one up quick.