Bookshots: '$2.00 A Day: Living on Almost Nothing in America' by Kathryn Edin & H. Luke Schaefer

Review by Christopher Shultz September 2, 2015
In: 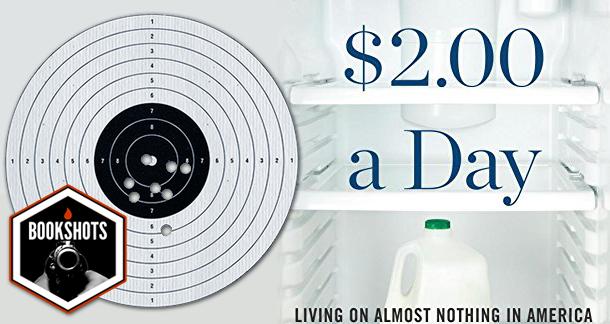 $2.00 A Day: Living on Almost Nothing in America

Perhaps one of the most important books to appear on the shelves this year.

Kathryn J. Edin, "one of the nation's leading poverty researchers," according to the book's blurb, and H. Luke Schaefer, "an associate professor at the University of Michigan School of Social Work and Gerald R. Ford School of Public Policy, and a research affiliate at the National Poverty Center." (Long story short, these two know their stuff).

Edin and Schaefer document the lives of several families who barely subsist on less than two dollars a day per person in any given month, a shocking level of poverty most Americans assume does not exist in this country.

I'm not well-versed in eye-opening political science texts, but a safe bet would be co-author Edin's other books on poverty.

No one family or individual receives greater focus here. We are meant to take in each of their stories as very human, very real representatives of a largely overlooked problem in the United States.

No one would ever want to live in the conditions these families endure.

Barely making it on $13 an hour is Jennifer's version of the American dream. Yet even this modest aspiration can seem all but out of reach.

Edin and Schaefer's $2.00 a Day is perhaps one of the most important books to appear on the shelves this year, primarily because it tackles a subject that still struggles to gain traction in America's collective consciousness, but it does so in an accessible fashion. Books of this sort have the potential to be overly didactic, loaded down with facts, figures and research findings average readers find hard to digest. This is not the case with $2.00 a Day.

Which is not to say the book is void of evidence—far, far from it—but rather that it presents said evidence in tandem with the personal narratives of families stuck in this unfortunate economic cycle (Edin and Schaefer reveal that most families dip in and out of $2-a-day incomes indefinitely). Basically it's the "show, don't tell" principle here: it isn't enough to simply state that families live like this; we have to see it just as clearly as the authors saw it during their extensive interview sessions. In doing so, the authors dispel the myth that those most in need of welfare in this country are shiftless ne'er-do-wells in search of a handout. They are regular, everyday people who have, largely due to circumstances out of their control, fallen on hard times.

Moreover, not only does $2.00 a Day shed light on a little-known and often ignored problem in America, Edin and Schaefer offer a solution. They write:

This book is about what happens when a government safety net that is built on the assumption of full-time, stable employment at a living wage combines with a low-wage labor market that fails to deliver on any of the above. It is this toxic alchemy, we argue, that is spurring the increasing numbers of $2-a-day poor in America.

Put simply, this book advocates for the full implementation of available welfare dollars in this country combined with an expansion of at least semi-desirable jobs and an increase in minimum wage. This simple plan for eradicating the $2-a-day poor is argued much better in Edin and Schaefer's words, so I strongly recommend picking this book up.