'As a Machine and Parts' by Caleb J. Ross 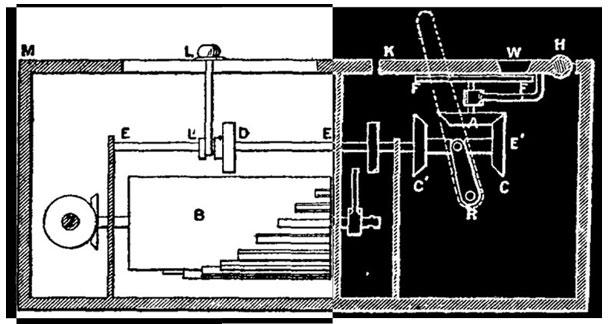 Caleb J. Ross’ newest novella As a Machine and Parts is one part Max Barry and one part typography experiment a la Mark Z. Danielewski.

People who have read Barry’s Machine Man are going to see the similarity, as the core idea is roughly the same: man turns into machine.  The major difference is that Barry’s character willingly brings on this transformation one “improvement” at a time, while Ross lets it happen "organically." Mitchell, a twenty-something from the Kansas City area, suffers from the condition of literally becoming mechanical.  His hair falls out.  Skin molts away.  He becomes heavier as his bones turn to steel.  Mitchell feels less, both physically and emotionally, and it’s in this metamorphosis that Ross has the perfect device to cause a rift in Mitchell’s relationship with his girlfriend, Marsha.

This shift from human to machine is accompanied by typographical changes.  In the beginning, the human phase, the text is handwritten and full of flourishes.  As the machine takes over in Mitchell, the text becomes more and more impersonal until we’re eventually looking at something like a schematic.  It’s pleasing to the eye but may impede upon readability at some points.  A couple times I didn’t know if I was supposed to keep reading down or move right.  There’s also one section of the book (starting on pg. 67) that reads like House of Leaves on steroids with its 180 footnotes.

180: is that an Only Revolutions reference, Caleb?

It should be a provocative month for LitReactor's book club, as Parts is the official selection for January.  I can’t help but point out the obvious impending debate here, and that is Machine Man vs. A Machine and Parts.  This is the natural order of things when two authors work the same territory.  It’s what’s happening right now with The Hunger Games as it seems to be highly derivative of Battle Royale.  Ross and Barry are competing in their own literary version of Iron Chef; the man-to-machine ingredient is the same, but their presentations couldn’t be more different.  Barry is more of your traditional storyteller while Ross is clearly showing his proclivity for all things artistic and experimental.  The typography shifts and diagrams work for me, but I can’t help but think how much cooler it would have been if Ross had the funds for something grander.  Perhaps he could have started with paper pages, and had those slowly shift until they’re metal and engraved.  Totally unfeasible, I know, but one can dream.  The final product is still pretty sexy:

My only gripe with this novella is the same gripe I have with most works that aren’t even 100 pages long: I want more.  Ross explores an idea—a fucking great idea, in fact, but I don’t feel he explored it fully.  The shift from man to machine is a swift one.  Too swift.  I finished the book in a matter of a couple hours.  It’s a solid release—don’t get me wrong, but some readers may be left wanting by the time it’s over.  With a concept this good, you kind of want to get cozy and stay a while.  As a Machine and Parts was like a house party that ended way too soon because 5-0 got a noise complaint.  I guess that’s my way of asking for a nice 300-pager the next time Caleb tackles another book.

I know I compare Ross’ novella to Barry’s Machine Man quite a bit.  It’d be irresponsible of me not to considering they share a core idea.  Keep in mind though, I’m not trying to recommend one book over the other.  In fact, I think you should pick up both.  Ross’ writing is (yet again) something to be admired, and his aptitude for experimenting with literary structure and form is showcased in a techno eye-candy sort of way.  Pick this one up if you’ve been looking for something a little less traditional that plays with the visual aesthetic.

You can order As a Machine and Parts by visiting Aqueous Books or on Amazon which is linked below.

So incredibly kind of you, Brandon. I'll be smiling the rest of the day, week, hell, year.

180 footnotes?  Is this the new literary trend?  I am going to start writing in the margins or something.

@aliensoul said: "180 footnotes?  Is this the new literary trend?"

Not if you read Vollmann.