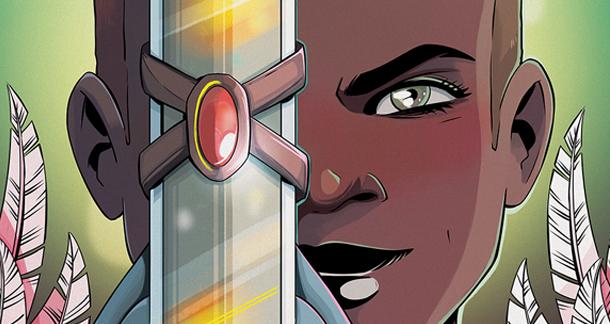 Delilah S. Dawson has written in multiple genres, dabbled in the Star Wars universe, taught for us here at LitReactor... and now she's making the move over to comic books with Ladycastle, a four-issue miniseries from BOOM! Studios. The first issue is out today.

When King Mancastle and his mighty vassals ride off on crusade, the women left behind are not at all put out—that’s a lot less armor polishing for them to do. Of course, when the men get themselves eaten by a dragon and leave a curse that attracts monsters to the castle…well, the women take umbrage with that.

Now the blacksmith’s wife Merinor is King, Princess Aeve is the Captain, and the only remaining (and least capable) knight Sir Riddick is tasked with teaching the ladies of the castle how to fight, defend, build, and do all manner of noisy things the men had been doing while the women assumed they were just drunk.

Novelist Delilah S. Dawson (Star Wars: The Perfect Weapon, As Wicked as She Wants, Wake of Vultures) brings her first original series to comics, and is joined by breakthrough illustrator Ashley A. Woods (Niobe: She Is Life) for a rollicking fantasy adventure featuring women reclaiming their lives on their terms.

Pick it up, but before you do that (or after you do it, whatever, I'm not the boss of you), check out our little chat. I was curious to know more about the move from prose to comic scripting...

Why was a comic book the best format to tell this story?

"Strange women lying in ponds distributin' swords is no basis for a system of government." BUT WHAT IF IT WAS?

The idea for Ladycastle actually came *after* an editor offered to field my pitches. I wanted to come up with one lighthearted pitch and one dramatic pitch, hoping to cast a wider net. That night, my kids were watching Monty Python and the Holy Grail, and when I heard the line, "Strange women lying in ponds distributin' swords is no basis for a system of government," I thought, BUT WHAT IF IT WAS? So as the idea developed, I was thinking of fun ways to add visual interest and iconic designs. As we massaged the idea, my editor suggested the armor be less King Arthur and more Mad Max: Fury Road, and I was SO DOWN. So the entire idea was developed around my longing to write a kickass comic, and it had plenty of help from our editors, Chris Rosa and Sierra Hahn, and the artist, Ashley Woods.

As a novelist, what was the hardest part about moving over to scripting?

I write my books in fast, violent first drafts, then lovingly edit them to death. A book can change up until its final pass pages, and I always leave room for little epiphanies or sudden twists. In comics, the words have to be perfect long before the artist and letterer get involved. Bless my editors, who gave me a crash course in writing stronger scripts. I also learned, after seeing the first inks, ways to be more specific when I have a firm vision of what I want a panel to look like. In some instances, I could see it perfectly in my head, but my words didn't communicate it clearly enough. In plenty of instances, what Ashley did was 100 times better than what I'd intended. I long ago learned that books are not precious perfect babies, and comics are the same way. It's a joy to see how the story evolves.

What was the easiest?

Seeing the artwork arrive! It's like Christmas morning when you were a kid, when you've asked for certain things and you get this amazing mix of things you wanted and things you needed but didn't know you wanted. I dig the quick time frame and can hammer out an issue or an edit in a couple of days instead of the months of slogging required by a book.

Novel-writing is a bit more solitary. What was it like working with Ashley Woods and the team at Boom?

Still relatively solitary, but with plenty of support. It's more of a back and forth, both with the editors and with Ashley and our letterer, Jim Campbell. I'm really enjoying every step of the process and am deeply impressed with the entire Ladycastle team.

What other comic book writers did you look to for inspiration?

One of my breakthrough moments occurred when Chris sent me a link to a script Kelly Sue DeConnick had written for Bitch Planet. That became my Rosetta Stone for learning the mechanics and vocabulary of writing a script. I also learned a ton from the blog and advice of Jim Zub, who's been super supportive. As a writer, I cut my teeth writing six-page shorts for the BOO! anthologies at MonkeyBrain Comics, so I'm really grateful to Jon Morris for that opportunity. As for books I read for inspiration, that would be Saga, Lumberjanes, Nimona, Pretty Deadly, Adventure Time, Chew, and Rat Queens.

Much like writing, your first one will probably suck, but you have to learn by doing. I start out with a piece of paper numbered 1 to 22 and use that to make a loose page-by-page outline. The hardest part for me, as a novelist, is using fewer words and letting the art do the talking. Read widely, study the greats, and get your hands on successful scripts to learn the basics. Having great editors, a talented artist, and a magical letterer also helps.

And if you want to learn more about comic pitching, check out Splash Page with Archie Comics editor Alex Segura, starting April 4.