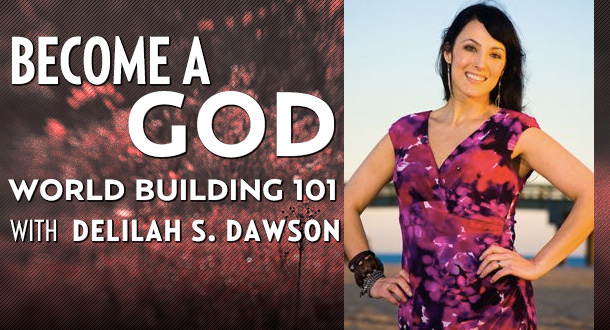 Your Instructor: Delilah S. Dawson, author of 'Wake of Vultures' and 'Servants of the Storm'

You make the rules, draw the maps, control the characters, and decide exactly what color the sky will be. There are as many ways to build worlds as there are worlds to build. Which is to say: infinite. That will either scare the pants off you or set your mouth watering and your fingers twitching.

Put on your god-pants and get ready to write.

In this class, you'll learn different ways to approach worldbuilding, and how to insure that the world and characters you've created are so real, rich, and strong that they'll suck the reader in from the first page and keep them hungry for more. After all, there's a reason people go to the trouble to learn Klingon or Elvish.

Delilah S. Dawson is the author of the critically-acclaimed Wake of Vultures and Servants of the Storm, as well as the wildly-imaginative Blud books, where steampunk meets carnie fiction meets science-fiction meets horror meets... well, Delilah covers a lot of ground.

If you have a dream, a hook, a character, a name, a map, the seed of a story idea, Delilah can help you build the world around it.

Whether you start with a character and build a world around them or start with an entire universe to focus in on your story, there are certain things you're going to need. Pretend you're a god building your first Adam.

*Class starts Feb. 21 but there's still plenty of time to enroll and get to work!

First came the idea, which the writer must turn into a scaffold for the plot and characters. Whether you're writing an entirely new world filled with creatures of your own design or you're just tweaking our world through the addition of one powerful change, there are certain signposts that will help the reader become completely immersed in your world. Without a skeleton, your story is floppy and useless, and we don't want that.

Assignment: Craft your idea into a one-sentence hook and start building a World Profile.

Time to create characters who will be uniquely challenged by your world. Race, gender, love, hate, religion, magic—what makes your world run? Where's the conflict? What makes the heart beat? Every character wants something, even if it's just a glass of blue milk.

Assignment: Give us a character profile of your main character(s). What's their background, what's their present, what do they want, and what challenge do they face?

We have a foundation, we have characters motivated to move. Now we need a sensory experience that will convince the reader from the first page that they're in a different world. How many details are enough, and how many are too much? Where's the perfect point to start your story to keep a literary agent or editor reading? We'll explore elegant simplicity and use language to support your characters as they chase their goals.

Assignment: Write your opening scene including well-integrated details of your world and your character.

So now you've got a book, or at least some opening chapters. Editing and retrofitting are the finishing touches to making your world and your story stand out from the rest. Revision isn't a haircut; it's major surgery. Let's talk about developmental edits, polishing, and how to know when you're ready to query.

Assignment: After receiving critique from the instructor and your fellow students, look critically at your opening scene and rewrite it, integrating carefully chosen details and a sense of time and place to fully ground the reader in your world.

* This class includes up to 4k in-depth developmental critique of your first chapter(s) by a traditionally published author. You'll have constant access to the instructor via the LitReactor forums, so it's a great chance to ask that ungoogleable question about the mysteries of publishing. And if you finish your book within the next year, the instructor will critique your query before you send it!

Delilah S. Dawson is a native of Roswell, Georgia and the author of the paranormal romance Blud series for Pocket, including WICKED AS THEY COME and WICKED AS SHE WANTS and two e-novellas, THE MYSTERIOUS MADAM MORPHO and THE PECULIAR PETS OF MISS PLEASANCE.

"World creation in Science Fiction & Fantasy, or any other literary genre, is not easy. Delilah S. Dawson shows you the in's and out's of world creation, and her enthusiasm motivates you to give the best of yourself, your craft, the fantasy world in which your story is set. I very much recommend this workshop to anyone who wishes to write in the Science Fiction & Fantasy genre, or any other genre. It's well worth it." —Jairo A.

"Dawson's Savannah is beautiful and haunting. . . . Right away, Dawson serves up atmosphere, humor and scares, balancing it all deftly. Turning the page felt like peeking around a corner; I wanted to know more but I was afraid of what might come next. It's gorgeous Southern Gothic with a swift kick." —Madeleine Roux author of the New York Times Bestseller Asylum, on Servants of the Storm

"I dare you to try and put Wicked As She Wants down after one page. I'm pretty sure it's impossible. Dawson's Blud world is so utterly original, offbeat and immersive, it's completely addicting. And it's absolutely refreshing to root for a heroine who is, well, as Wicked As She Wants." —Audrey Goodson Kingo, RT Editor