Why I Am Writing Under a New Name 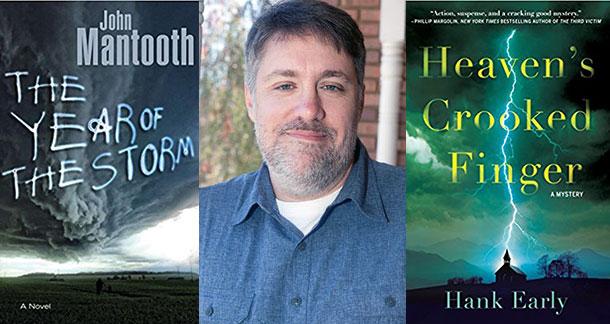 This article originally appeared on the Hank Early website.

So, one of the questions I've been getting is why write these next two books under a new name. What was wrong with John Mantooth? Some folks have rightly pointed out that you can't really hope to find a better name than Mantooth, and I would tend to agree with them.

The short answer is that I didn't have a choice. The publisher, Crooked Lane, requested it.

The long answer is a little bit more complicated. Publishing is first and foremost a business (big surprise, I know). No matter how much a publisher or editor likes your novel, someone has to believe they can sell it. My first novel, The Year of the Storm didn't sell very well. There are a great many reasons for this. I'm willing to accept some of the blame, of course. Obviously, some books demand to be read. I'm not sure TYOTS was one of these. Don't get me wrong. I'm extremely proud of the novel. It was nominated for a Stoker and well-received critically. It helped me make a the list of Alabama horror authors people should be reading right now, along with some truly legendary horror writers. Still, for whatever reason, the book didn't connect with as wide an audience as I'd hoped. Penguin had an option on my second book, Tuskaloosa, and chose not to exercise it. Some extenuating circumstances added to my problems during this time. My first agent, Beth Fleisher, decided to retire and Penguin merged with Random House. According to my new agent, Alec Shane, I wasn't the only author to get lost in the shuffle because of this merger. Whatever the reason, and whoever was to blame, the bottom line was this: Penguin didn't believe John Mantooth was an author they wanted to put more money behind.

Penguin didn't believe John Mantooth was an author they wanted to put more money behind.

Apparently, word got around. Other publishers shied away from Tuskaloosa as well. Again, I'm not blind to my own faults here. I'm a big believer in the old make it good enough and somebody will buy it line of thinking. I thought I had done just that. My agent and I spent most of 2015 trying to sell it. At the end of 2015, he suggested we shelve it, and I write something new. 2015 was a bad year. I had extremely high hopes for Tuskaloosa. I believed it was sort of a breakthrough novel for me, a big, sprawling epic of crime and class that I still think contains some of my best writing. Many editors who read it seemed to agree, but obviously didn't feel strongly enough to pull the trigger.

In 2016, I wrote Heaven's Crooked Finger, the first of a planned series about the son of a evangelical, snake-handling preacher who grows up to be a private investigator. We began to shop it around. Responses were good. I'd made an effort to create something more marketable, and it seemed like many editors were taken with it, but several claimed they just couldn't overcome the poor track record of The Year of the Storm. It was, in a word, disheartening. My confidence hit an all time low. I began to wonder if I'd ever publish outside of the small press again.

Enter Crooked Lane Books, an independent crime publisher with a solid distribution and an excellent (though short) track record. Not one of the big five publishers, but maybe that was a good thing. They were willing to take a chance. They let my agent know they were interested but had some questions. Really, I think they only had one question: Would I take a pseudonym in order to position the book as a debut and alleviate the bad sales record of The Year of the Storm?

I never really thought twice about it. Sure, it would be great to publish under my real name, but the bottom line is that I'm a writer and I want readers regardless of what the name on the cover of the book says.

Will I ever publish under John Mantooth again? I hope so. I hope Tuskaloosa can still find a home under my real name. As of now, the only thing that will be under Hank Early are my Earl Marcus books.

I also want to say that if you liked the Mantooth books, I hope you'll give Hank Early a shot. I think you'll find the voice is essentially still mine, and Early might even be a little better at telling a story and a lot better at pacing.

So the moral of the story for aspiring authors? If your first book tanks, it's really hard to get back in the game. I'd always heard that, but now I've lived it.

John Mantooth is an Alabama writer of horror and crime fiction. His first novel, The Year of the Storm, was a finalist for the Bram Stoker award. He also writes the Earl Marcus Mysteries under the pseudonym, Hank Early. Heaven's Crooked Finger (Earl Marcus 1) is available now. He's represented by Alec Shane of Writers House.