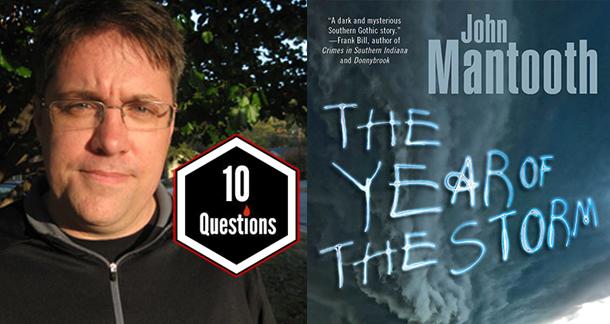 Debut novels are a dime a dozen; I hate to say it, but it’s a cold hard fact. With the sheer number of books being produced by the big 5, small presses, micro presses, and no presses on a daily basis, it’s near impossible for a first time storyteller to gain any sort of attention for a project they’ve slaved over their entire lives, which is a shame. But it is what it is, and I’m more than guilty of passing over a debut author because one of my standard bearers has a new novel coming out the same day.

But there are debuts which immediately grab my attention and demand to be read, and The Year of the Storm by John Mantooth is the very definition of “attention grabber.” It is a flat out page turner. It is a rare thriller which combines elements of rural noir, supernatural horror, and is an intense dual coming of age story that is as spellbinding as anything from horror masters such as Stephen King and Laird Barron.

The Year of the Storm is without question my debut novel of 2013, and one which I hope you’ll be willing to take a chance on.

I still have it somewhere.  I wrote it when I was a senior in high school for a creative writing class.  Don’t remember the title, but believe it or not I still have the first line in my head.  “The heat enveloped her like a hot glove.”  Or something like that.  Pretty bad, right?  It was about this girl who survived a plane wreck in the desert, only to meet her demise when she saw an oasis that was really a mirage.  She was so excited, she dove in headfirst and (since there was actually no water) she snapped her neck and died.  I won the senior creative writing award that year, which was almost by default because I was one of the only seniors who took the class.  Still, it boosted my confidence and made me believe that one day I could do this for money.

Considering it was for ten dollars, it didn’t seem to merit a huge celebration.  The story was called “The Man Across the Street” and I later cannibalized it for a better story called “James.”  It appeared in Futures Mysterious Anthology Magazine (how’s that for a title?).  I still have the check, uncashed, hanging on my bulletin board.

Everything is done on my Macbook, which unfortunately I’ve had since about 2008 and is on its last leg.  I’ve messed with Scrivener some, but usually, I just end up doing it on Word.  I rarely ever write at home because when I do, I invariably end up falling asleep on the couch.  I go to coffee shops or the library where falling asleep is less acceptable.  There’s enough going on there to give me the background noise I require.  Also—I rarely write to music, which, I think, puts me in the minority.

Waiting so long to start.  After writing that story my senior year, I didn’t write another until I was thirty.  I often think about those wasted years, how much farther along I’d be now if I’d written in my twenties.  On the flip side, maybe I needed that time just to live life.  I go back and forth, but mostly I can’t help but think I would have benefited from an earlier start.

You didn’t tell me there would be big words.  Seriously, I think the catharsis for me occurred when I realized I’d gotten it right.  Not to say it’s a perfect story (it’s not), but I think I nailed the melancholy of growing up, the disappointment life sort of throws at us when we realize nothing will ever be as innocent as childhood.  It’s something that I come back to time and time again in my work: the line where children finally see the adult world, and it’s never a clear picture, but instead fraught with deceit and pain and all those damned blind curves.  Yet, and here’s the cathartic part for me, we don’t have to fully become adults.  We can remember the hope of childhood.  It’s really our only chance, I think.

That’s a tough one.  I have a terrible memory for names. (After referring to my Goodreads bookshelf…)

Probably Marcelo from Marcelo in the Real World.  He’s the mildly autistic main character of Francisco Stork’s young adult masterpiece.  Marcelo’s dad is a high-powered attorney, who thinks his son lives in a dream world and wants him to learn about “the real world.”  Of course, by the end of the novel, the reader understands that Marcelo may be the only one who really does live in the “real world” because our world is so often filled with lies and spin.  He’s really a wonderful character from what has to be one of my favorite books.

I do Amazon Prime.  Please don’t judge me.

Good question.  It never feels good when someone doesn’t like your work.  I’d be lying if I said it didn’t bother me.  It bothers me a lot.  Having said that, I try to move on and remember that tastes are different, and one person’s opinion doesn’t invalidate me as a writer.  Sometimes, I even agree with what they say and try to learn from that.  I’ve never experienced a review where someone just tried to trash me.  Everything has been fair so far, knock on wood.

There’s so much bad advice out there, it’s hard to choose.  I hear a lot of show don’t tell advice, which I think is damaging a lot of young writers because they go to great lengths to avoid “telling” and end up dramatizing every little thing instead of just saying something in a sentence and moving on.  I’d also mention that when I read stories by unpublished writers, I frequently find setting to be really lacking.  Many of them are dialogue driven to the point of irritation.  I like for stories to breathe a little, to slow down.  Unless you’re somebody like Frank Bill (and chances are you’re not) whose stories really benefit from that lightning fast action approach.

The Year of the Storm is essentially a dual coming of age story, one of which is in a contemporary setting, the other set in 1960. Did you have difficulty shifting between the two voices and time periods and did you write both simultaneously or as two separate storylines?

I wrote them simultaneously in the first few drafts, but when I really stepped back and started revising, I approached them separately.  Making the voices distinct was one of the most difficult things about writing the book other than getting the ending right.  Walter’s story (the one set in the 1960’s) was the hardest because Danny’s voice was very close to my natural writing voice, while I had to really get into Walter’s character.  Hopefully I succeeded.  I will say I don’t plan to do multiple first person narrators again any time soon.