Column by Christopher Shultz December 24, 2019
In: 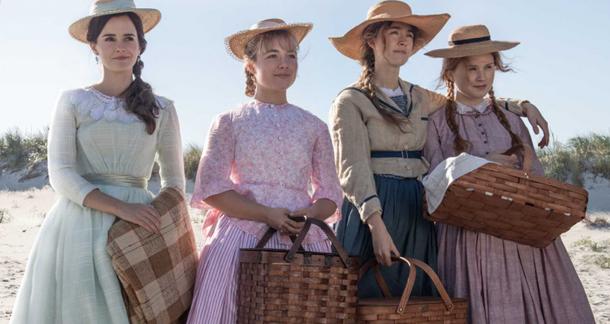 On Christmas Day 2019, the latest film adaptation of Louisa May Alcott's seminal novel Little Women hits movie theaters. This version, written for the screen and directed by Greta Gerwig of Lady Bird fame, is the third adaptation of Little Women in as many years, and it follows "four movies, more than ten TV adaptations, a Broadway drama, a Broadway musical, an opera, a museum, a series of dolls, and countless stories and books built around the same characters," according to Smithsonian writer Alice George. Or as Erin Schwartz puts in the title of her piece for The Nation, "Every Generation Gets Its Own 'Little Women.'"

Boys on their way to becoming adults should learn, from an early age, that women come in all different shapes, sizes, and mindsets.

It is tempting to devote heaps of words on just why this novel endures on into the modern day, but honestly, the answer is pretty straightforward and covered extensively in both articles mentioned above, as well as elsewhere. To put the matter as succinctly as possible, Alcott shows readers a broad cross-section of girls and women grappling with the conflict between personal desire and the expectations of their gender (i.e., domesticity, marriage, child-rearing, etc.).

This is not to say that discussing the novel's lasting appeal is unimportant. But for our purposes here, a different (though related) consideration needs examining, one that both George and Schwartz touch upon in their respective pieces: the notion that Little Women is only an eternally pertinent and potent text for girls and women, and not boys/men.

Why is this the case? For the reasons you might imagine. George notes that Theodore Roosevelt, "the very model of a manly man," absolutely adored the novel, but only admitted so "'at the risk of being deemed effeminate.'" She also points to a New York Times article by James Parker and Charles McGrath, the latter of whom reflects upon his reading of Alcott's novel in the fourth grade. "Because the title made it sound like a girls’ book," McGrath writes, "I covered my copy with a brown paper wrapper..." Last but not least, George points to Anne Boyd Rioux and her non-fiction book Meg, Jo, Beth, Amy, which explores "'the incredibly widespread impact'" of Little Women, despite its decreasing popularity among younger readers, largely due to its disappearance from standard school curriculums across the country. The reason: in part "because it is seen as unappealing to boys." In other words, reading of the interior world and struggles of girls and women—all of which are pointedly modern despite the novel having been written in the 19th century—isn't something boys would want to learn about, largely because doing so would make them—pardon the expression—"pussies."

And this is exactly the reason boys should read the book, the sooner the better. A study published in 2013 revealed that reading fiction fosters empathy in the reader. We're living under a stifling dome of toxic masculinity right now (and always have been, but at least we're talking about it now). Little Women is perhaps the ultimate text to help boys understand that the dreams of girls are no different than their own, but that their struggle to actualize those dreams is infinitely more difficult, precisely because of their sex, a harsh reality embodied most prominently with Jo March's narrative. Her one wish in life is to remain unmarried and become a successful author, but she herself understands the slim possibility of this wish coming true. "I've got the key to my castle in the air," she states during a conversation about hopes and aspirations, "but whether I can unlock the door remains to be seen."

While Jo has some success publishing lurid pieces of fiction, ultimately the loneliness she feels toward her proto-spinster life leads her to accept a marriage proposal from Friedrich Bhaer, a man Alcott describes as "neither rich nor great, young nor handsome, in no respect what is called fascinating, imposing, or brilliant." In other words, she settles for the second man that comes along (the first, of course, being Laurie, her girlhood chum whom she loves, but at the time of his proposal was not ready to become a wife). As a result of this settling, Jo eventually abandons her writing in favor of opening a boys' school with her husband, raising his two orphaned nephews, and birthing children of her own; she becomes, in other words, everything that is expected of her.

Alcott, who remained unmarried until her death, actually shoehorned this ending onto the novel because fans and her publisher demanded it; her intention had been to leave Jo unmarried by the end. As Greta Gerwig explains, the author's choice of mundane Friedrich over dashing and romantic Laurie, the man Jo "should have" married, was a calculated decision, one made out of "spite" and "perversity." It seems clear that while we shouldn't necessarily feel sorry for Jo, we shouldn't see her marriage as anything joyous either, and this is something boys especially need to understand: not all women hunger for a husband—though of course some do, as represented by Meg, the oldest March sister, who marries a poor tutor for love and seems genuinely happy in her domestic life, despite her family's hardships. Amy, the youngest sister, is an amalgam of Meg and Jo, determined to devote her life to art, though practical enough to realize she isn't talented enough to make it as an artist, and will thus need to marry a wealthy man to ensure her financial security. (If you think Amy is nothing more than a vain brat, read this hilarious defense of the character by Kathleen Keenan, or watch Gerwig's film, which highlights Amy's intelligent nuances marvelously.)

In this way, the reason Alcott's novel resonates so well with girls and women is the same reason boys and men should love the work. Slash Film writer Hoai-Tran Bui puts the matter beautifully and succinctly: "The greatest strength of Alcott’s Little Women is that it embraces all different kinds of women—the vain, the beautiful, the kind, the angry—and treats them with the same love and affection." Boys on their way to becoming adults should learn, from an early age, that women come in all different shapes, sizes, and mindsets. They are not conquests, they are not just potential wives and mothers, but fellow human beings with wants, dreams, and insights. Realizing this at a young age is integral to becoming a better, more actualized, and respectful man.

So all young boys out there, and especially grown men who've never read it, pick up a copy of Little Women today and dive right in.