Column by Christopher Shultz November 19, 2015
In: 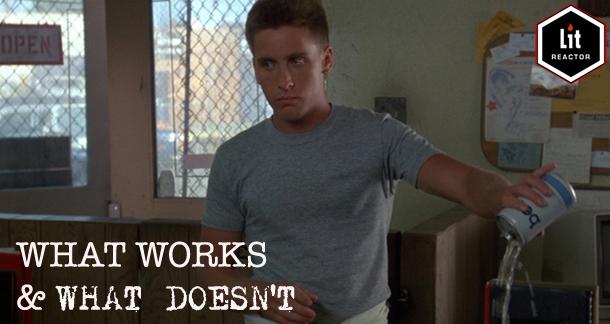 Welcome once again to What Works & What Doesn't, a monthly column dedicated to the craft of screenwriting. Back in August, we got the discussion rolling with Chinatown as an example of what Robert McKee calls an Archplot, or what we generally know as the classic three act plot structure; in September, we looked at Miniplot—the second point in McKee's "Story Triangle"—by examining Lost in Translation; and finally, to demonstrate the tenets of Antiplot, last month we dissected The Texas Chainsaw Massacre.

Collectively, these three columns broke down the basic types of narratives commonly seen on the screen (of course it must be noted that the "Story Triangle" parameters are not hard and fast, and films often fall into a fuzzy area in-between specific categories). Now that we have a firm grasp on these three approaches, it is time to discuss the basic building blocks of screenwriting. Deconstructing the components in reverse order, a script is composed of Acts, Sequences (or movements), Scenes and Beats. Just for the sake of clarity, let's get a definition of each from Robert McKee and his book Story: Substance, Structure, Style and the Principles of Storytelling (note too that McKee's terms aren't much different than most others):

An ACT is a series of sequences that peaks in a climactic scene which causes a major reversal of values, more powerful in its impact than any previous sequence or scene. (pg. 41)

A SEQUENCE is a series of scenes—generally two to five—that culminates with greater impact than any previous scene. (pg. 38)

A SCENE is an action through conflict in more or less continuous time and space that turns the value-charged condition of a character's life on at least one value with a degree of perceptible significance... (pg. 35)

A BEAT is an exchange of behavior in action/reaction. Beat by Beat these changing behaviors shape the turning of a scene.

While these elements help us to create engaging narratives, the most basic building blocks of screenwriting are dialogue and scene descriptions, as we're inevitably writing one or another to create the smallest story structure element, the beat. This time around we'll focus on scene descriptions, which in my opinion are just as important as lines of dialogue, if not more so. I think there's a common misconception that scripts should be loaded with dialogue, but establishing audio and visual elements that are evocative and yet also succinct, and that work toward moving the narrative along—i.e., constructing beats—is an integral part of the craft, and honing this skill can actually prevent you from writing bad dialogue. As McKee states:

The best advice for writing film dialogue is don't. Never write a line of dialogue when you can create a visual expression. The first attack on every scene should be: How could I write this in a purely visual way and not have to resort to a single line of dialogue. Obey the Law of Diminishing Returns: The more dialogue you write, the less effect dialogue has.

As stated above, scene descriptions are concerned with sound and visual elements only. This is one of the primary differences between screenwriting and prose writing, where utilizing all five senses helps to absorb the reader into the world of the story. In film (and also TV), viewers will never be able to smell the sweet aroma of a hot slice of French toast, taste its buttery, hearty flavor, or feel the texture of its crust on their fingers, so including sumptuous words such as these is, frankly, a waste of time. McKee elaborates this point further:

[The screenwriter's] work must contain all the substance of literature but not be literary. A literary work is finished and complete within itself. A screenplay waits for the camera. If not literature, what then is the screenwriter's ambition? To describe in such a way that as the reader turns pages, a film flows through the imagination.

This is important if you're seeking financial backing, pitching a role to an actor, or in general trying to win interest in your work. Again, the script must be evocative yet succinct, but also entertaining.

So let's look at some examples of great descriptions from one of my favorite movies, Alex Cox's 1984 classic Repo Man, and examine which ones work and which ones don't.

Because Alex Cox is a stand-up guy, he's made the entire screenplay for Repo Man available to read on his website. So read along!

Let's head over to page 14, class. The first description under consideration is a brief one, but it features every hallmark of excellence: it is succinct, evocative, and entertaining. In this scene, our protagonist Otto (Emilio Estevez) has just unwittingly assisted Bud (Harry Dean Stanton) with the repossession of a little old lady's Cutlass; now, he waits in the bustling Helping Hand Acceptance Corporation, silently observing the business at hand.

OLY
What if we are.

BUD
Want to know something? When  I see someone looks the way you do, my first reaction is, I wanna REARRANGE HIS FACE. But y'know what?
(in unison with OLY)
YOU'RE ALL RIGHT!

It should be noted that there is no dog actually present in the scene, nor is the sound element of thunder and the visual cue of the sky growing dark meant to be taken literally. Cox uses this single line as a way of communicating a blast of tension in the room between Oly and Otto. Watch the way the scene plays out on the screen:

We can see here an actualization of McKee's advice to write a visual expression rather than dialogue. Cox's line "THUNDER. Sky grows Dark. Dog whines" is actualized by Otto's pouring of the beer can on the floor. This action is also a far better reaction than his scripted line, his silent insolence speaking louder than words ever could (see Cox's notes in the margins of the script).

But even as written, we can see how this single line works as a beat, because it represents a shift in the dynamic of the room. Remember above I stated that Otto had unwittingly assisted in a repo job? This is because Bud tricked him into doing so by telling Otto his old lady was sick in the hospital and he needed to move her car out of "this bad neighborhood." Note too that the repo yard is called Helping Hand Acceptance Corporation, a name that doesn't in any way indicate what sort of business it is. It is clear that Oly and his employees are fond of subterfuge and secrecy, so when Otto calls their profession out, there is the threat of a Spaghetti Western-style showdown, which Cox demonstrates not by stating outright "The air grows tense," but by using language indicative of that subgenre's melodrama. The tension-building continues with dialogue, ending with the bubble-burster that Bud and the others actually respect Otto for his rebelliousness, but it all starts with that one brilliant scene description.

Just like the example above, there is a single line of description that stands out to me as missing the mark. It appears earlier in Cox's script, just after Otto has reunited with his old chum Duke (Dick Rude), fresh out of a stint in slammer. Let's take a look (it's page 4, in case you're curious):

OTTO and his FRIENDS attend a concert by one of their FAVORITE BANDS. DUKE hangs around the sidelines trying to talk to girls. OTTO is often lost amid the swirling slamdancing MELEE.

Missing DUKE, OTTO leaves the dance floor. He grabs DUKE by the shoulders and hurls him across the room. Together, spinning wildly, OTTO and DUKE cut a whirling DOUBLE DERVISH thru the colliding THRONG...

Now, if you guessed that the offending line is the bit about the gang attending a concert by "one of their FAVORITE BANDS," you would be incorrect. While this description is a bit vague, we can decipher that Otto and his friends LOVE this band based on their reaction to the music, which Cox describes beautifully in these two paragraphs.

No, the line in question here is "Missing DUKE." How do we know this? How can we SEE this? It's the show, don't tell principle. Cox could have wrote,

Otto scans the crowd. He spots DUKE, trying to talk to girls. Otto grins and barrels toward his friend, grabs him by the shoulders and hurls him across the room...

and this would have given considerable visual indication of Otto's desire to find and interact with his friend again. Simply stating that he misses Duke is too throwaway, too easily skimmed. These are the types of descriptions that should be avoided when writing a screenplay.

But other than these two words, everything else about the paragraphs printed above is pitch-perfect. We can easily see Duke and Otto thundering through the crowd, the writing is just so visually rich; given this, Cox does not need to describe the music—we know it is loud, raucous and fast (incidentally, the song used in the film is "Coup d'Etat" by Circle Jerks). So, despite the weakness of the line "Missing Duke," Cox offers an evocative scene without wasting too many words that allows, as McKee advises, a movie to play out in the reader's head.

What do you guys think? Check out Cox's screenplay and give us some examples of descriptions that both work and don't work for you.

What Works & What Doesn't: 'Badlands'