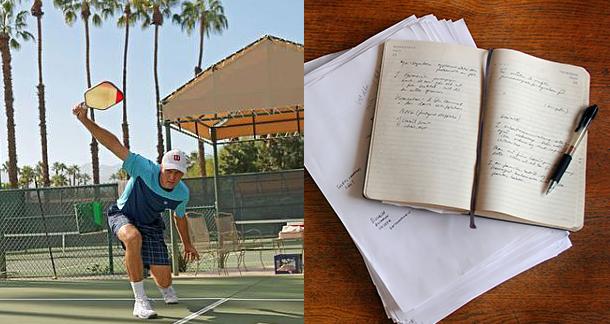 I can’t believe it,* but LitReactor is letting me do another sports & writing related article. The last one was about football, which was great because I got to throw shade at Jay Cutler, who ended up ruining my favorite team’s season. There will be less shit talking in this column as I get to share my love for one of the best new sports of this century—Pickleball!

What is Pickleball? Here is a video to give you a heads up.

Basically, it’s doubles-tennis, badminton, and Ping-Pong thrown together and easily played on a tennis court or inside on a basketball court. It’s super fun and—unlike tennis—you don’t have to be young or in great shape to play it. Yes, it’s very popular with older people, but young people are starting to play it too.

I’ve played Pickleball for over a year now, and I'm proud to say I’ve gotten pretty good at it. A lot of people might not suspect this by looking at my average height and dad bod, but I'm a pretty good athlete. I was a solid point guard in basketball, and have good hand-eye coordination. I even beat Paul Tremblay in a foosball championship and almost won the Ping-Pong championship at NECON! Pickleball, however, wasn't something I was good at right away.

It didn’t bother me though. I was ok with sucking. I treated games like they were practice, and I watched what the really good players did—adding spins and top notch serves, aggressively playing closer to the net, placing shots. Basically, these players were doing a lot more than just hitting the ball over the net and keeping it in-bounds. Watching how good they were, I was willing to sacrifice short-term results for long-term improvement. It was hard, but around the year mark the skills I learned and natural talent caught up to each other and now I’m one of the top 5 players on the court.

Helping others improve helps you improve

I've also noticed some correlations between Pickleball and being part of a literary community. For instance, there are some players that no matter what they do, they will only progress so far. At first they are absolutely terrible and can’t even hit the ball over the net, but if they keep at it they can become a serviceable player. They make a good play here and there and sometimes get lucky and make a few great plays. Sadly, I think this is the case with writing as well. Some people can work their asses off, read a ton, write a ton, and still be just an okay writer or storyteller.

Whether we're talking about Pickleball or writing, there are certain abilities that give a person an edge. With Pickleball they are speed, hand-eye coordination, agility, reaction time, arm length, height, and the desire to practice and improve. That last one is as important as the natural gifts. I set up a jerry-rigged practice net and hit the ball against the wall, and that has made a huge difference in my game. But what are a writer's natural gifts and how do writers practice?

If I had to narrow it down to 5, I'd say empathy, rhythm/ear for language, ability to bullshit aka storytelling, intelligence, and creativity. It’s going to be hard for a writer to produce enjoyable and readable work if they are lacking in any of those areas. It’s the same for uncoordinated over-70-year-old players on the court. They can have fun playing the game, but they can’t really compete with the top players.

If a writer with those abilities keeps writing they’ll become a good writer, but they’ll never be great unless they have that desire to improve. I say that as an editor more than a writer. The special writers are the ones with the ability AND the desire. They are willing to try writing things out of their comfort zone and are always looking for any ‘trick shot’ they can add to their toolbox—and they practice.

For me, practicing Pickleball involves the monotony of hitting a ball against the wall and coming up with different shots. For authors, the ability to work with someone else can help them towards their potential. Someone who is a skilled editor and can give them feedback. Someone who can tell them what works and what doesn't. Better yet, send your work to different editors/publishers who will give you feedback. It’s no different than playing opponents of different skill levels on the Pickleball court.

The final correlation I found between Pickleball and writing is helping others improve helps you improve. I always try to give pointers to new people on the court and I take a lot of pride in the editorial work I do as a freelancer and for my press. Teaching others is a great way to remember the basics. While it feels good to edit an established author, I find it more rewarding to edit a talented, newer writer. Giving back and working with people who are enthusiastic about writing is the best way to keep loving the game.

*Neither can we —Ed.